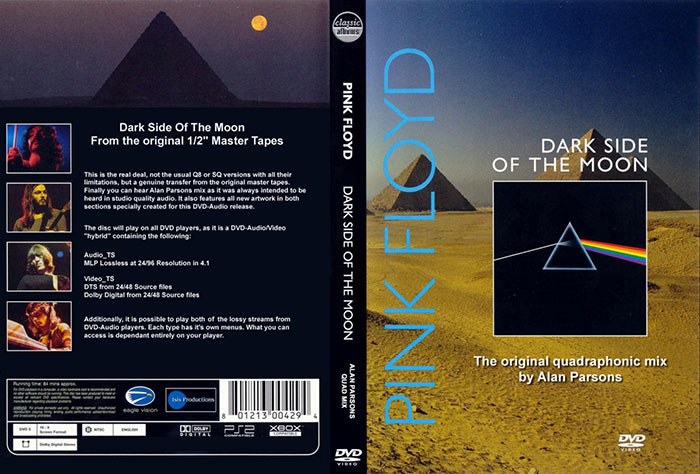 Cracked discs bring ‘Dark Side of the Moon’ back into the headlines today, as over the weekend, participants on several Internet audio forums (Hi Rez Highway, Steve Hoffman Forum, QuadraphonicQuad and the Home Theater Forum) began discussing how some copies of the recently released 30th Anniversary edition of the album ‘The Dark Side of the Moon’ by Pink Floyd (Capitol 7423-582136-2) have cracks in them. According to the Internet messages, the cracks start from the center of the disc and radiate outward.

According to editor Stuart Robinson, High Fidelity Review has received several messages from concerned owners of the disc, who were either reporting the issue to us or enquiring about the best course of action to replace their cracked copy.

The Crest National version of the SACD can be identified by the master numbers shown on the inner rings of the disc (S26713-C on the outer ring and S26713-H on the inner ring). These discs will also have the text “Mfg. by Crest National” inscribed on them. The text appears above the spot on the disc where the catalog number (724358213621) is on the lower layer of the disc. The text itself is in the area above the second ring. A note here – the text is very small, I needed a magnifying glass to verify it.

Are There Any Other SACDs Affected?
The next question in all of this was are there other Hybrid SACDs affected? Messages on the Internet audio discussion areas pointed to the three most recent DMP SACDs and the two most recent Groove Note SACDs as also being affected. These SACDs are: Broadway Inspirational Voices – ‘Grace’ (DMP SACD-17), Bob Mintzer Big Band – ‘Gently’ (DMP SACD-18), Warren Bernhardt, Jay Anderson & Peter Erskine – ‘Amelia’s Song’ (DMP SACD-19), Ray Brown Trio ‘Soular Energy’ (Groove Note GRV 1015-3) and LA4’s ‘Just Friends’ (Groove Note GRV 1016-3).

This information was significant because these five SACDs were also pressed at the Crest National plant. I was also interested to note that these discs were among the first SACDs made by Crest National, which might aid in figuring out what the problem might be here.

In checking my own SACD collection, I found that my copies of ‘Dark Side of the Moon’, ‘Grace’, ‘Soular Energy’ and ‘Just Friends’ had evidence of the cracks as well. In the case of the two Groove Note SACDs (‘Soular Energy’ and ‘Just Friends’), it was minor while it was more pronounced on the ‘Grace’ and ‘Dark Side of the Moon’ SACDs. I also found some cracks on my copy of the ‘Star Trek: Nemesis Soundtrack’, a Hybrid Multichannel SACD also pressed by Crest National early in their SACD work.

On the other hand, I found that several of my recently acquired SACDs made at Crest National (‘Alison Krauss & Union Station Live’, ‘Every Breath You Take: The Hits by The Police’, ‘Bob James in Hi Fi’ and ‘Man of the World: Reflections on Peter Green’) were completely normal, with no signs of marks or cracks. In fairness, I should also mention that both the SACDs with the cracks and the ones without them continue to play fine on the two SACD players here.

Next, I ventured out to Tower Records over the weekend and picked up another copy of ‘Dark Side of the Moon’. It was a Crest National pressing as well and was free of marks or cracks. I’ve played this new ‘Dark Side of the Moon’ SACD several times and taken it in and out of its case. As of this writing, the disc remains crack free. My conclusion is that the cracking problem appears on some Crest National SACDs, but not others.

Comment from Crest National and Elusive Disc
When I first heard about this matter, I contacted the folks at Crest National and several affected parties. Unfortunately, since the issue arose over a weekend, today was the first day that some of them had to look into the matter.

The initial response I received was one of surprise. Clearly no one was aware of this issue. But I was pleased to see that as soon as I brought the matter to their attention, there has been a lot of activity to look into the situation and develop an appropriate action.

Officials at Crest National told me that this was the first time anyone had brought this matter to their attention. They are looking into this to see if they can determine what the problem might be with the affected SACDs and the extent to which the problem may be. I hope to hear more from Crest National on all of this in the next day or so.

I also heard from Bob Bantz, the President of Elusive Disc first thing in the morning. Bantz was also caught unaware by the matter. Elusive Disc is in an interesting spot here since they sell SACDs to customers via their web site and they also serve as the U.S. Audiophile Outlet Distributor of Groove Note Records, one of the labels affected by the cracking issue on two of their SACD discs.

“We stand behind every product we sell with any problem it may have regardless of the source of the problem. This has always been and always will be our policy! Elusive Disc customers can email us a list of any and all discs you have purchased from us that exhibit this or any other problem and we will give them an RMA (Return Merchandise Authorization Number) to return them. We will inspect them so we can see the nature of this problem and then can open copies here to ensure they don’t have this same problem before replacements are sent.”

He went on to add that:

“Today is when I first became aware of this situation from an email from Ying Tan at Groove Note. We will be working with Groove Note, DMP and any other affected record labels to try to resolve this problem as soon as possible. Please feel free to post this response so anyone else affected will know where we stand on this or any other issue like it.”

Next Steps
As I mentioned earlier, I’m continuing to track this situation and am awaiting more responses from the affected parties. As soon as we have more information on the seven affected SACDs, I’ll let you know.

Until then High Fidelity Review’s staff will continue to monitor their discs, and I’m going to experiment with my own and the copy of ‘Dark Side of the Moon’ that I have from Crest National that is in excellent shape. We’ll see if that changes as the SACD gets more plays – and more turns in and out of the spindle holder. Stay tuned!

Tags: cracked SACD, dark side of the moon, pink floyd