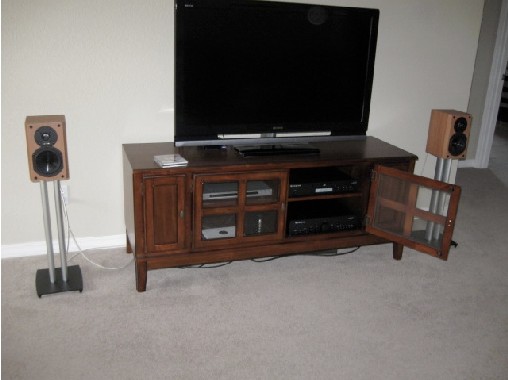 So, what is Flat Earth? Contrary to what some would have you believe, Flat Earth is not restricted to either Naim or Linn. This isn’t a concept defined by brand. Rather, it is a reflection of how people listen to music from their systems more a value judgement of what’s important in music reproduction. That is, dispense with the aspects of reproduction that you can not be sure of (e.g. soundstage, imaging & reproduction of the recording environment) and instead concentrate on the construction of the music. Is the bass in time with the percussion? Does the piece hang together as a whole? This, of course, is not to decry the ’rounder’ aspects of reproduction. Aspects such as soundstage etc. can enhance the experience. The Flat Earth approach simply gives primacy to the tune …

The term “flat earth” may be new to many readers. It is a somewhat obscure segment of audio whose philosophies contrast those of the “round earth” mainstream, whose foci is frequency balance, soundstaging, resolution and tonality. Not to denigrate the importance of those ideals. Flat earth’s ascension paralleled those of Linn and Naim. I consider myself a flat earther to the extent that I place more emphasis on the “big picture” derived through the timing, architecture and message, rather than the individual elements.

I reviewed Vandersteen 1C and Spendor SP2/3e loudspeakers for A$$A about a year ago and subsequently sold my entire system to help fund the purchase a new house. The previous system had been upgraded via evolution through many years. It started with Naim electronics and ultimately ended with a Leben tube amplifier and a 47 Labs transport and DAC. I was certainly satisfied with the final system. However, by that time audio had become my cruel mistress of diminishing returns. I was burned out, but I learned an important lesson: trust only your own ears rather than those of reviewers and even fellow audiophiles. With the house purchase behind me, I was finally able to assemble a new system. I set the budget at $1000 this time, mainly because I no longer want to devote the funds I once did for audio; and having experienced the audio law of diminishing returns, I just wanted something modest this time.

What follows is the methodology I used in assembling this system. I believe it is vitally important to have a sound methodology in system building, much like it is when buying a car or house. My goal was simplicity and a return to the flat earth approach. As I discovered, budget gear is where the real fun is at and excellent results can be obtained regardless the budget.

With the exception of loudspeakers, I am a firm believer in using electronics all from the same company. Synergy can be assured since a given manufacturer can design their components to work together. Furthermore, For a simple inexpensive system, a traditional solid state integrated amplifier employing discrete output devices possesses an unbeatable combination of reliability, speaker compatibility, versatility and simplicity. The sound quality of tube amplifiers in this price range will be severely compromised by their output iron and, with the exception of maybe Virtue Audio, the power output of tripath amplifiers in this price range will be too low to drive typical dynamic speakers to acceptable volume levels.

For the above two reasons, I bought a Cambridge Audio 540A integrated amplifier and 540C CD player. I chose to purchase new rather than used. I like having a warranty and dealer support, while buying used can save a lot of money and is generally safe with loudspeakers, I have had problems with used electronics.

The 540A is the archetypal solid state British integrated amplifier, something near and dear to me. When I became interested in audio back in college, British solid state integrated amplifiers like Creek, Alchemist, Aura, Audiolab and Mission (now Cyrus) ruled the budget segment of audio. While Cambridge, like so many current companies, uses Chinese manufacturing, its design and management are located in England. The 540A is 50 wpc into 8 ohms and usefully has remote control and defeatable tone controls.

Because I have never explored analog and because my research indicated that a computer-based front end at this price range, would not provide superior sound quality, I chose to purchase another CD player. This is one area where I now differ from traditional flat earth philosophy is in system hierarchy. Traditional flat earth mantra is source first – the CD player, turntable, etc. is the most important component in the system and where most funds should be allocated. The logic being that if you don’t start out with quality on the front end, you cant expect quality on the out of the back end. However, I believe the loudspeakers are now the most important component in a system. Hardcore flat earthers have a derogatory term for this – a “mullet” system (i.e., short in the front, long in the back) but there are a couple of very good reasons for prioritizing the loudspeakers. First, the errors (e.g., distortion) produced by a loudspeaker are far worse any other component in a system so it makes sense to apply funds it’s needed most. Second, with digital’s maturation, I have found the differences between current generation over and upsampling CD players to be minor Thankfully I still had cables and ancillaries left over from my previous system. While a dedicated equipment rack is also important, my television stand was ideal. I believe cables and ancillaries are sonically important but not nearly to the extent implied in some current reviews. Somehow spending a lot of money on cables and ancillaries has become a mainstream belief. My ancillaries and cables consist of a Cardas Microtwin interconnect, Cable pro Insight speaker cables, Naim Tibia and Zu Birth power cords, a (non-filtering) Cablepro Revelation II power strip and Solidsteel ZR-6 (24” high) speaker stands. None of my ancillaries are particularly expensive. I did try a few other cables for the new system (the subject of a later review) but ultimately preferred the same cables I already owned. One other things I firmly believe in from research and personal experience is avoiding any form of AC mains filtration. So for that reason I obviously didn’t invest any money in those products. 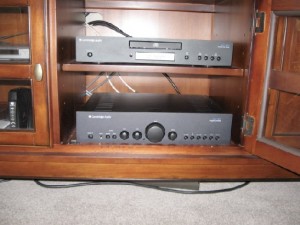 The geometry of my new listening room (which is also the living room) presented two acoustic challenges. First, the loudspeakers must be within 18” of the front wall. Second, my listening position can only be right up against the rear wall. The close proximity to the front wall could emphasize bass. The rear wall is always a bass node. Therefore, one of the key criteria for my new loudspeakers was a very dry and limited bass extension, the domain of mini-monitors. I compared four loudspeakers in my room, three of which were mini-monitors.

I compared the Cambridge Audio S30, Usher S-520, AV123 X-SLS Encore, and the Epos ELS-3. I chose Epos ELS-3. While my room, which is an irregular and well furnished 300 square feet, would normally be too large for a mini-monitor like Epos ELS-3, such are the compromises necessary for good sound in the real world. As I don’t normally listen at high levels, this is not an issue. I also enjoyed that these are one of those rare speakers at any price that, for whatever reason, just work. They time very well and are transparent, resolving, coherent and open. They also play well at low volumes. On the debit side, they have no real bass to speak of (which is ironically a benefit in my situation) and are slightly drab or gray tonally, particularly in the treble. Overall, though, I find little to fault with them. They are unaffected by my room constraints and are musical, smooth and fun. That is why I ended up keeping these.

A major “component” of any system is the room itself or, more specifically, the way in which the speakers interact with the room. Sadly, this is most overlooked and least understood aspect among audiophiles. Judging by the system pictures I’ve seen on the web, the vast majority of audiophiles have loudspeakers too large for their rooms. In my opinion two essential requirements for high fidelity are having loudspeakers properly positioned and with bass extension that does not overwhelm the room in spite of whatever positioning constraints are imposed. Regarding positioning, it is essential that both the speakers and the listening position be located away from bass nodes if possible. Nodes are essentially high pressure regions in a room that selectively enhance bass frequencies by 10 dB or more. As node locations and their frequencies are a function of room dimensions, each room has its own unique set. Furthermore, using bass trapping to fix a poor loudspeaker choice is very difficult and often expensive to achieve properly.

Since this is the first time I had assembled a complete system in many years, I really didn’t know what to expect. My expectations were realistic but the results far exceeds them. The system as a whole vastly exceeds the merits of the individual components. What this system does not do is play loud or provide holographic soundstaging, deep bass or extreme transparency. What it does do is three important things. First, while I don’t think it approaches Naim in this regard, it times well and is fun and engaging. Second, it follows my maxim, to paraphrase Hippocrates, that an audio system first do no harm. There is no brightness, listening fatigue, or stodgy, thudding bass. Third, at least with the tone controls defeated, it has a pleasant and full tonality. It also surprises me with its resolution. While it certainly isn’t state of the art in any one of these areas, it is well balanced across all of them and its sins are minor and of omission rather than commission. There is room for improvement in various areas that I will explore in the future, but the end result really surprised me with how good of sound quality can be had for such a minimal budget.

from aﬀordableaudio, By Greg Johnson