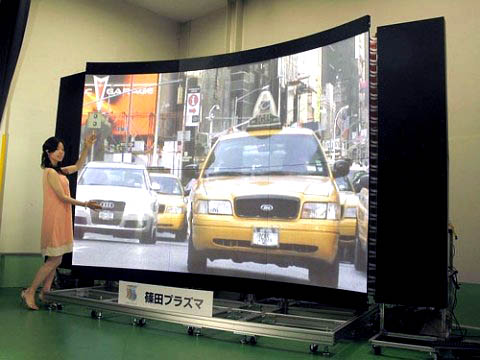 Shinoda Plasma Corporation has decided to continue to push the envelope with their latest prototype, which is a rather impressive 145-inch plasma display that is actually six separate displays combined to create one big screen.

Each mini display measures 1m by 1m or 39.4-inches squared and are arranged three by two to create this 145-inch giant.

The display’s resolution is quite low at only 960 x 720. Weighing barely 16-pounds, this display does show the possibility of large yet light weight screens in the future. It can avoid the bulk because of its 1mm ultra- thinness. Additionally, the display is coated in glass, making it flexible and curved. No word on when this display would be released or how much it would cost.