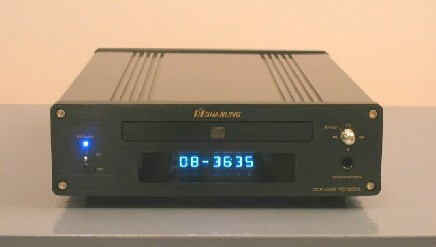 At the Montreal Festival Son & Image show back in March, I was very impressed with all the new gear that Charisma Audio had on display at prices most people could buy. Their new stylish Shanling MC-30 (CD player, iPod dock and 3 watt stereo amp all remote controlled) was the star but supply was short. I’ve seen this little device called the PCD300A for the first time and was curious about it because at 599$ (Canadian currency), half size, good looking component that trickled down technology from the vast array of successful CD players Shanling offers it could be a great component. Was it even more interesting is the fact that it has a built-in remote volume control which means you can add this feature to a system or drive directly a power amplifier without the need of a preamplifier if your system has only this source. If this wasn’t enough, it has a coaxial digital output if you wish to upgrade it later. By the way did I mention the headphone amplifier on the front panel?

Good news then as it’s very well constructed with a sturdy and rigid aluminum case with a grooved top to maximize rigidity and decrease airborne vibrations. The great part is the case is less expensive to produce that your normal tank like huge enclosure some high end manufacturers promote. The down side is there is less place for a good transformer and as parts are closer together than usual so radio, electromagnetic and digital noises can affect the sound to a greater extend. The unit also incorporate very good connections (gold plated), has mass for such a small unit (7,5 lbs) and even the supplied power cord deserve mention: it look like your typical 0,10$ cable included in any electric device but the it trumps the other 2 aftermarket cord I have in house with the PCD300A!

The feature rich small CD player must have some drawbacks for sure, it seems too interesting. Well all the controls work great (I love the little chromed stick for the play, track up, track down, pause, stop and even eject if you push it), the remote worked good (full function with volume up and down) and I had no trouble whatsoever during the review process. So it surely sounds thin and lacking bass, it’s a small unit after all; wrong, it has more bass than any sub 2500$ unit I heard to date (more on this later). I really got to find something or I’ll get fired so here it is: please burn-in long enough to let the sound come forth at it should (that means at least 300 hours, 500 is better).

So feature wise, it’s awesome but I don’t listen to features, it’s the sound that’s important to me. The sound is pretty good by the way. Let’s begin in the prodigious lower region. Normally I’m a believer in a neutral sound but if any part of the spectrum has a slight emphasis, I prefer the bass. Most will say the mids should be a little more pronounced because it’s the part we hear most music, I like it otherwise. You see if the bass is lacking, a part of the music energy and especially drive is lost. Less impact, less emotional connection, your mileage may vary. I guess it also depends on the music you like, a lot of ‘audiophile approved’ recordings simply have no or little bass frequencies but my tastes are very wide, I listen to everything that connects with me (sorry dance and country music…). I also spent a lot of time with a great little British integrated that I loved; it was really great but had little in the bass department and bothered me in the long run (it also gone to heaven, or hell, in a party spitting fire after five years of loyal services). Most affordable audio systems, the ones with no tone controls (please don’t buy electronics with tone controls, they induce phase shifts that screw up the music), lacks oomph in the lower region but this Shanling can correct a system with this problem. It doesn’t act as a tone control but it’s more solid and prominent than most at the bottom end. That bass is well defined (don’t expect it to compare with 5000$ unit) and has punch. It gives a lot more information about the dimension of the space music was recorded in. This little unit can pressurize a room in a surprising fashion.

Going up in frequency, the midrange is good. Information density is great but layers of musical information could be more detached ones from another. For example, non-commercial rock Sparta Trees is fabulous and the PCD300A has just the right mix of aggression/ forwardness to make this album work but some guitars occupied some parts of the same space. Great ‘crunch’ guitars, ambiance and detail retrieval that seem unattainable at this price even a couple of years ago combines to makes you enveloped by the music. You’ll catch yourself singing with Jim Ward on ‘Atlas’, a very emotional track possesses punch and great vocal harmonies.

If you like cord instruments, try Jorane. She’s a great player that also has an exceptional entourage and unusual song writing skills. I’ve listen to 3 albums in a row; the cords were realist, had good articulation and I really felt their interaction with the air of the room. I must also mention that the images are good and they emerge from a much quieter background that my current Talk reference player (about 1200$ five years ago) but soundstage was not as wide or deep. 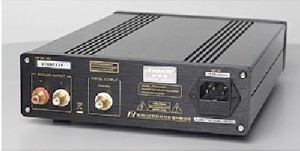 My reservation will mostly depend on system interaction. Holy Cole hasn’t lost her smooth sensual lushness on her latest album but the lower treble section of the Shanling can sound a bit hard. I must say that this is the major difference in a well thought digital design; you have to pay top dollars to get this region right (or maybe I’m very sensitive at those frequencies). On the other hand it can be just what the doctor ordered, especially with the bass section, to energize a dull system.

I have a fairly neutral system and time spend with the PCD300A (also named PCD3000A in some parts of the world, go figure) was a time of diet. High energy music diet, some Slipknot bashed my room, industrial floored it, electronic music flooded it and hip-hop made the walls shake. Snares had snap, heavy hitting bass drum where felt and percussions stood out of the mixes. This is not to say that smooth music didn’t sound good but the player really shines when asked to deliver a wallop.

For smoother music my Cayin integrated allows the change from Ultralinear (45w) to Triode mode (22w) and this act as lowering treble and bass section and to smooth out the attack portion of sounds. It worked really well when the sound had too much treble energy (a lot of ‘popular’ music is recoded that way) as it sweetens the music and give it a more coherent core.

Adjusting the volume control on the amp was a welcomed surprise. Most digital gear do lower the volume in the digital section by cutting bits which means dropping information but the PCD300A does it the good way: an analog Alps potentiometer. The sound doesn’t really change from 75 on up and believe me those 25 steps covers a huge volume range. Thumbs up for this implantation.

As for the headphone section, I must confess that I didn’t have anything on hand to compare it but at this price I consider it as a bonus. Listening to my trusty MB Quart 75x didn’t disable the RCA output and volume level in the 80 was way enough to get them very loud so you should be able to drive about any model. It’s also been a long time since I’ve listen to real headphone but I’ve done it a lot in the past while recording and mixing music so I think I still haven’t lost the ability. As expected I found the character of the player described above in the headphones, which is very good. It even seemed to acquire a slightly sweeter treble section and more distinct space for each instrument.

In conclusion, this is a very good player but can be awesome in the right system. The price performance ratio is downright extraordinary (read from China). In you have a dull system, love high energy music or need headphone amp and/or remote volume control; it’s a steal.