The performance of the Mahler 6th is available on a single inventory (no separate CD release), 2-SACD disc set. Each of the 2 SACDs is a Hybrid Layer Multichannel SACD. It features Michael Tilson-Thomas conducting the San Francisco Symphony Orchestra. The SACD features Multichannel SACD, Stereo SACD and Stereo CD versions on the music on the album. It is compatible with both SACD and CD players.

The set sells for a list price of $25.95, is distributed by Delos and is available from record stores and web sites that sell classical music as well as the San Francisco Symphony’s web store at shopsfsymphony.org.

Mahler Recording Wins Grammy Award
Along with the news that the Mahler 6th has been reissued, SFS Media also sent out an announcement that this recording had won a Grammy Award for Best Orchestral Performance earlier this week.

According to SFS Media: «San Francisco Symphony (SFS) Music Director Michael Tilson Thomas (MTT) and the San Francisco Symphony’s live concert recording of Gustav Mahler’s Symphony No. 6 received the Grammy Award for Best Orchestral Performance. This is the fifth Grammy Award to be bestowed upon Tilson Thomas and the Orchestra since MTT began his tenure as SFS Music Director in September 1995. Recorded live in concerts at Davies Symphony Hall on September 12-15, 2001, the disc was released on February 5, 2002, and shortly thereafter entered the Billboard Classical Chart at No. 6.

Launched in September 2001, the SFS’s Mahler project includes plans to record all of the composer’s nine symphonies and the Adagio from the unfinished Symphony No. 10. Produced by Andreas Neubronner of Tritonus Music Production, all recordings are being made in the emerging new format of Super Audio CD (SACD), playable in conventional CD as well as SACD stereo and SACD surround formats. The SFS’s Mahler Symphony No. 6 is the first SACD format release to garner a Grammy nomination and award.

The second installment of the cycle, a live recording of Mahler’s Symphony No. 1, was released in September 2002 and reached No. 3 on Billboard’s Classical Chart.

A two-disc set of Mahler’s Symphony No. 3 and Kindertotenlieder, both featuring mezzo-soprano Michelle DeYoung, will be released in March 2003.»
Mahler: Symphony No. 6 by Michael Tilson-Thomas conducting the San Francisco Symphony Orchestra (SFS Media 821936-0001-2) 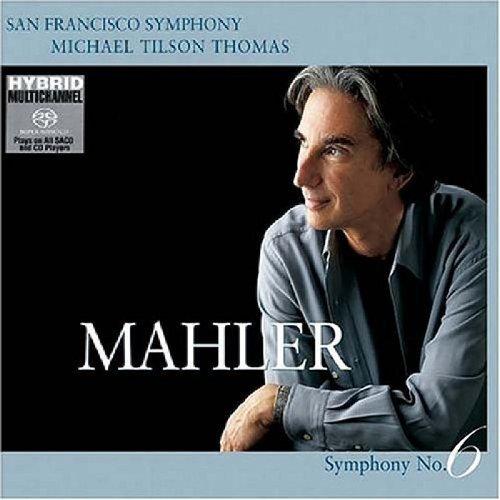