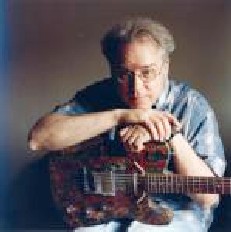 Bill Frisell is arguably the most distinctive voice in jazz guitar of the last 20 years. Owing as much to Jimi Hendrix as Jim Hall, he is equally comfortable comping tastefully in support of a singer as he is unleashing howls of distortion-laden noise. This versatility has made him a popular sideman, he has appeared on well over 200 albums by artists as wide-ranging as avant-garde enfant terrible Tim Berne, opera diva Renée Fleming, and “jazz-informed” pop star Norah Jones. His own recordings are equally diverse, running the gamut from experimental chamber music (Richter 858) to Buster Keaton film soundtracks (Go West, High Sign/One Week).No matter the context, Frisell’s tone and unique voice are always instantly recognizable.

His earliest recordings (on the outstanding German record label ECM) reveal a good deal of what would become his signature style: remarkable dynamic control, a taste for experimental music & electronic effects, nods to various forms of American folk music, and an underlying (and often overt) sense of melancholy. It is easy to think of his recorded oeuvre as being divided into two parts: the earlier avant-garde phase, and a later “Americana” phase, but this is really an oversimplification. I’ve tried to pull examples that reveal the whole of his musical sensibility as much as possible, but more than that these are simply albums that I love listening to. Of course, picking favorites from an artist with Frisell’s breadth is a highly personal endeavor, so take my “recommendations” with a grain of salt.

Before We Were Born

In the late ’80s, Frisell became a significant fixture in NYC’s Downtown avantgarde jazz scene. Before We Were Born, his majorlabel debut, is the product of three 1988 recording sessions. One of the dates, with former Ambitious Lover Arto Lindsay joining Frisell on guitar, produced the album’s title track, as well as “Lone Ranger” and “Steady Girl”, which all have the eerie, experimental sound characteristic of what was happening in Loisida Manhattan back in those days. The other two sessions feature the original incarnation of the Bill Frisell Band: Joey Baron on drums, Kermit Driscoll on bass, and Hank Roberts on cello. The first of these bore 4 pieces grouped together in a suite entitled “Some Song and Dance”. This music is pure Frisell, with carnivalesque melodies reminiscent of his work on ECM. A standout here is “Love Motel”, a strangely beautiful blues with outstanding solos from Frisell and alto sax legend Julius Hemphill. 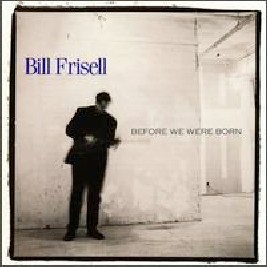 The masterpiece of Before We Were Born comes from a September recording session with John Zorn as producer/arranger: the 13-minute tour de force “Hard Plains Drifter”. It is something of an audio patchwork quilt, built in the studio out of a few dozen short musical snippets recorded by the Frisell band. Diversity & contrast are the key elements here, with each bit ranging in style from punk to country to free improv and everything in between. While much of it could sound tongue-in-cheek coming from another band, Frisell and crew play with an abandon and passion that would be impossible without a degree of love for every style represented. Not Frisell’s easiest listen, but certainly one of his most engaging.

Have a Little Faith

If you’ve never heard a Bill Frisell recording, this is a great place to start. Hearing an unfamiliar musician play a familiar tune may be the best way to learn about their style (as demonstrated by John Coltrane with “My Favorite Things”, by Miles Davis with “Someday My Prince Will Come”, etc.) and that’s exactly what this recording is. A true testament to the vast sonic landscape that is American music, Have a Little Faith presents music from a broad range of composers including Charles Ives, Sonny Rollins, Bob Dylan, Madonna, and others. While it might sound a bit gimmicky on paper, Frisell’s band pulls it off with a singular focus that works incredibly well. Every player has their shining moments, but the orchestrations steal the show: the fivepiece ensemble (Baron & Driscoll on drums & bass, plus Don Byron on clarinet and Guy Klucevsek on accordion) does a breathtaking job mimicking a symphony orchestra (on Copeland’s “Billy the Kid”), a marching band (on John Philip Sousa’s “Washington Post March”), and a variety of pop, jazz, and folk combos. This Land, also recorded in 1992, is something of a companion recording to Have a Little Faith, with a similar band (Klucevsek’s accordion is replaced by Curtis Fowlkes on trombone and the criminally underrated Billy Drewes on alto sax), but the tunes are all Bill Frisell originals.

In the mid-’90s Frisell jettisoned his long-time working band in order to explore American folk music in more depth. Country music became something of a focus, which peaked in the 1997 album Nashville, recorded in the city of the same name. Overall, this move alienated a portion of Frisell’s avant-garde jazz fan base, but his music was never meant to sit well with purists of any genre.

Gone, Just Like a Train has more of a rock edge to it than other recordings of this period, making it one of my favorites. A trio date with Viktor Krauss on bass (Alison’s brother, from Lyle Lovett’s band) and prolific session player Jim Keltner on drums, Train has some of best solos Frisell has ever recorded in the studio, notably on “Egg Radio”, “Lookout for Hope”, “Blues for Los Angeles”, and the title track.If you like this, Good Dog, Happy Man would be a worthwhile addition to your collection. It features the same band, plus a few guests show up here and there, including fellow 6-string innovators Ry Cooder and Greg Leisz.
A tad more countrified than Train, Good Dog still has its dark, powerful moments, and also features “Poem for Eva”, possibly the most beautiful melody Frisell has ever written. 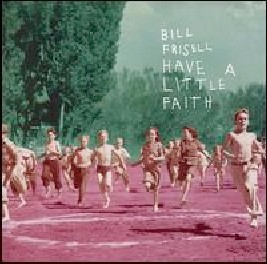 Ginger Baker has, in his heart of hearts, has always been a jazz musician. He gigged extensively in Dixieland bands throughout the ‘50s, eventually getting involved in the burgeoning British blues scene in the ‘60s, which led him to Cream and his status as rock’s first superstar drummer. Baker finally began making jazz records in the ‘80s, and it seems by 1994 (when Going Back Home was recorded) he had enough street cred to attract any backing band he wanted, in this case bassist Charlie Haden and Bill Frisell.Baker’s history almost guarantees this to be an interesting record, the good news is that it’s an outstanding record, especially for Bill Frisell fans. Frisell is way out in front here, at times gorgeous (on the Charlie Haden-penned “Spiritual”) and other times ferocious (on Ornette Coleman’s “Ramblin’”). Baker’s more rocking compositions succeed very well in Frisell’s hands, who plays pulse-quickening melodies on “I Ly Kron” and “Ain Temouchant”, and takes a monster solo on the upbeat set-closer “East Timor”. Bill Frisell fans have been looking forward to a live recording ever since, well, Frisell’s last live recording (the appropriately titled Live from 1991). East/West is a two CD set, with each disc recorded in a different club: East was recorded at New York City’s Village Vanguard, and West at Yoshi’s in Oakland, California. Each is a trio date with the versatile Kenny Wollesen on drums. The bass player changes on each recording, as does the overall sonic conception…so much so that it’s almost hard to believe that the two dates share any common members at all. West, with Viktor Krauss on bass, rocks harder. Jams are more extended, and reach out and grab you on the first listen. East, with Tony Scherr on bass, is a good deal more subtle, but improves with repeated listening. Frisell’s playing is top-notch throughout… no surprise there, what did surprise me is his use of electronic effects. He’s always had a high-tech approach to his instrument, but what strikes me on East/West is how good he’s gotten at it: seamlessly blending electronic and acoustic sounds with deft precision, Frisell creates music that is at the same time traditional and unlike anything that has come before, and that is exactly what his music is all about. 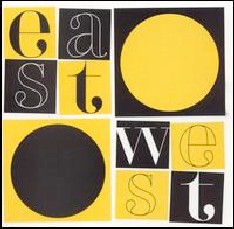