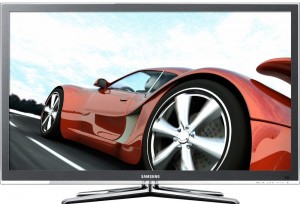 We end out our coverage of big and amazing LED televisions for this week with a look at the Samsung UN46C6500, and it’ll be one more you want to add to your list if you’re looking for a new television. Not necessarily because it’s bigger than many of the pieces you’ll find out there, but because it does a nice job of putting up its images. It’s not the best by a long shot but it will do a nice job with the exhibition.

The Samsung UN46C6500 is a forty six inch 1080p LED television running at 120 hertz for reduced blurring with high speed images. You’ll also get ConnectShare Movie to play images and video off of a USB drive or from a digital camera, Smart TV for internet access to the wide variety of content available therein, a game mode to improve the picture at high speeds, two ten watt speakers, four HDMI ports, Anynet Plus capability, two USB prots, one component video, a PC input and an ethernet port.

Now, there will be a lot of mixed feelings here. There are plenty of connections for newer components, but not near so many for the older ones. The sound quality will not do near so well as the picture does. There’s an up side for every down here, and that makes it difficult to recommend fully.

It’s certainly one you’ll want to see for yourself, to see if you feel differently. Especially if you have plenty of newer components. You can actually find this on Circuit City’s website for twelve hundred dollars, which is a pretty good price for a fairly large LED television.