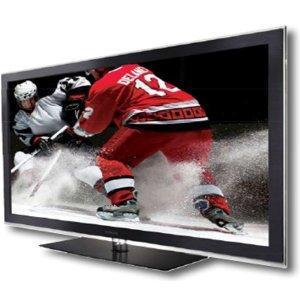 We finish out a week of reviews with another sweet piece of hardware from Samsung. It won’t be quite as nice as some we’ve seen but it will bear some special pluses to offset its comparative lack of quality. We’re talking about the Samsung UN40D6000, and it’ll impress you on at least a couple levels.

The Samsung UN40D6000 is a forty inch 1080p LED that includes internet connectivity complete with streaming capability and Samsung’s apps via Smart TV, which gives you access in turn to a whole lot of other options. It also comes with ConnectShare, to let you view content from USB and SD sources, Auto Motion Plus to give you a 120 Hz refresh rate which in turn reduces blurring, Ultra Clear Panel and Wide Color Enhancer Plus systems to further improve the image quality, two ten watt speakers backed up by SRS TheaterSound, four HDMI ports, one component video input, one PC input, three USB ports, one composite input, and one digital audio output.

Of course, a forty inch picture will only deliver so much quality, so too with ten watt speakers. But this does have plenty of features to back it up, along with support for streaming, which is never really not a good thing (factor out the negatives–it works). I might have liked more support for those devices that aren’t recent, but then, I usually have that complaint, and while it’s no less valid here, it still doesn’t get too much in the way.

The folks at Amazon, meanwhile, want $989 for one of these, making it the supreme rarity of a sub-thousand dollar LED television system.

The Samsung UN40D6000 may not be the greatest thing out there, but for those looking more on a budget, you might do all right with this one.