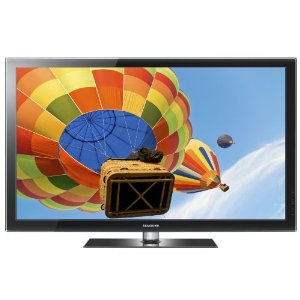 So today, we’re carrying on with the plasma television review series by taking a look at the Samsung PN58C550, a surprisingly potent Samsung that puts up a good quality setup, but won’t do so at a bargain price.

Now, right off, performance on this thing is about as good as you’d expect from a big Samsung. The picture and sound both look and sound pretty nice–sure, ten watt speakers aren’t much but that SRS TruSurround backing it up is always great, and 1080p looks good most anywhere. There are always some differences, of course, but still, this one looks in the upper tier, at least to me.

I’m not happy, of course, with the lack of support for older components, but aside from that, most of this is pretty good. I tell you this now to try and soften the blow when I fill you in on the price tag on this monster–a whopping fifteen hundred bucks out at Amazon, which is pretty pricey no matter what standard you use.

However, the Samsung PN58C550 will not disappoint in what it provides. It’ll give you a quality experience, as long as you’ve got deep pockets and lots of new equipment.