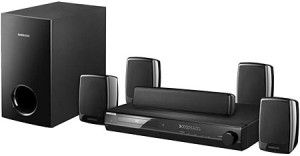 We end our week of home theater systems by taking a look at the nicely priced Samsung HT-Z320, a system that may not have the most power and utility you’ve ever seen, but will do a fair job of putting up your movies and TV shows with terrific sound quality.

The Samsung HT-Z320 is a 5.1 channel thousand watt home theater speaker system that offers a center channel speaker, two front speakers, two rear speakers, a subwoofer and a DVD player. You’ll also get upconversion to near-1080p for your DVDs, Auto Sound Calibration systems, compatibility with a large variety of different formats, AnyNet Plus technology, an iPod dock, a USB port for playing music and videos directly from a USB drive, an FM tuner, one component video output, one composite video output, one HDMI output, and a headphone jack.

The sound quality isn’t really anything spectacular, though it does do a nice job with loud, and that’s always a plus in most any home theater environment. The sound is clear and pleasant, though it’s not going to do anything really fantastic, it should at least do a fair job of putting out the sound. I would’ve liked a Blu-ray player in here, maybe a few more connections, but for what they’re asking for this out at Amazon, it’s not bad by half.

Amazon’s looking to offer the Samsung HT-Z320 for the oddly specific $173.44, marked down from two hundred thirty bucks. Admittedly, this isn’t a big and fancy system, but at that kind of price it really doesn’t need to be. You likely won’t blow anyone’s mind with this system, but if your budget’s a consideration, then the Samsung HT-Z320 is going to be one to keep an eye on.