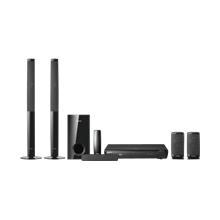 And once again, Samsung does a terrific job of alternately blowing my mind with their sound generation capability and irritating me with their bizarre control schemes.  Today we’re talking about the Samsung HT-BD3252.

And of course, it also comes with some really unpleasant touch controls that took me several minutes to master.  I’m not fond of Samsung’s control scheme but they do get the job done.

It puts out some incredible sound quality, which seems to be the standard for most any Samsung audio product that I’ve found so far, and they’re going to charge like it does too.  You probably won’t find this for less than five hundred fifty bucks, which was about the lowest price I found.  You may, of course, do better with used or refurbished, but that’s your call.

At any rate, the Samsung HT BD3252 is a really high quality system, even if they’ll charge you like one.