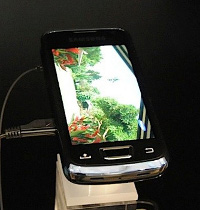 When it comes to Apple products (and we mean upcoming ones, of course), rumors tend to stick to them much more often compared to other consumer electronics devices. Is it because the company is so high profile, and Apple has the knack of revolutionizing the way things work in our world? Perhaps, or the real reason could be the plain simple opportunity of creating something out of nothing to see a flurry of mindless chatter go on simply because there is such a large following of Apple products.

One of the juicier rumors to make its way across the Internet was the next generation Apple iPhone boasting an integrated pico projector inside. Of course, those rumors have been officially crushed as Apple commented that the next iteration of their smartphone will not come with a pico projector, and according to the representative, “Sources from pico projector makers pointed out that the related (research and development) is still not mature and demand from consumers has yet to appear, so smartphone-use pico projector models are unlikely to start mass shipping until after 2012.”

Of course, with the iPhone already being a notorious juice sucker from your battery packs, it makes perfect sense to leave the pico projector functionality out at the moment as you surely would loathe a device that runs out of juice in less than an hour after it was fully charged, right?