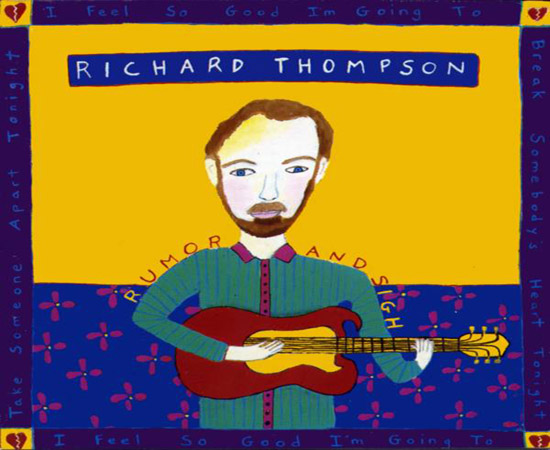 The first batch of long-awaited EMI DVD-Audio discs, released at the end of July, included one of the most talked-about and original albums of the early 1990s, Richard Thompson’s ‘Rumor and Sigh’, produced by the legendary Mitchell Froom.

Thompson began his recording career in the 1960s as a member of Fairport Convention, penning instantly recognisable or melancholic songs such as ‘Meet on the Ledge’ and ‘Farewell, Farewell’. After leaving Fairport Convention, Thompson’s accomplished guitar-playing skills would find him filling time as a session musician before ‘Henry the Human Fly’, his first solo album, was released in 1972. Ironically, given the disc’s popularity today, at the time of release it gained notoriety as the poorest selling record in Warner Bros. history. Such is the rise and fall career of Richard Thompson, on top one moment (his albums performed with ex-wife Linda Peters) and then back down to the doldrums with ‘First Light’, the album released after Thompson resurfaced from a spell in a Muslim commune.

It wasn’t really until the early 1980s that Thompson’s solo output rose to a consistently high standard and people began to sit up and take note. His musical style is unusual and unique, and although you’ll hear that often about one artist or another, in this case it really is the truth. Thompson mixes complex, clever and sometimes morbid lyrics with rock and folk jazz guitar; there are punchy up-beat numbers and slower, more sombre pieces where Celtic themes mix with country and western. Once hated by the music critics he’s now picking up awards left, right and centre, including a Grammy® nomination for the 1996 release ‘You? Me? Us?’.

‘Rumor and Sigh’, another Grammy nominee, is often categorised as a folk album, but that’s an over-simplification, no, in fact it’s downright inaccurate. Sure there are folk and even skiffle themes here and there, but the disc is just as much about country, rock and jazz. Perhaps the eclectic nature of Thompson’s music was the primary contributing factor in his slow rise to fame and can also be blamed for the fickleness of his audience, but music that differs so markedly from track to track (or album to album) really is difficult to pigeonhole and demands a certain level of concentrated listening. Once experienced however, you’ll find yourself wanting to hear more…

If you’ll pardon the pun, guitars play a large part in ‘Rumor and Sigh’ but as has always been the case with Thompson works, it’s the song lyrics that catch one’s attention, together with his distinctive rising and falling vocal style. The disc’s first track, ‘Read about Love’ is a prime example.

“Asked my daddy when I was thirteen, daddy can you tell me what love really means? His eyes went glassy, not a word was said, he poured another beer and his face turned read…”

There are also darker tones, those of ‘Grey Walls’ being the blackest on this particular album as the subject deals with the committal of Thompson’s “darling” to a mental institution. Strangely enough however, even the most morbid issues are dealt with in an up-beat, often jovial way so that the audience never feels depressed or embarrassed, it’s hard to feel miserable when tapping one’s foot. The strangest track, and an illustration of the mood is ‘Psycho Street’, which mixes an apple pie and picket fence chorus with alarming spoken lyrics:

“A man has an inflatable doll made that looks exactly like his wife. He murders his wife, dissolves her body in acid and marries the doll. Three years later he leaves her for another doll…”

The DVD-Audio surround mix for ‘Rumor and Sigh’ was created by Steve Genewick at Capitol Studios and it’s excellent, striking just the right balance between a convincing conveyance of the front soundstage and attention-grabbing discrete rear events, sprinkled around the disc to emphasise one musical point or another. Throughout the entire album, the exception being ‘I Feel So Good’, Genewick has placed Thompson’s voice almost entirely into the centre channel and to great effect; lyrics are clear, precise and have an uncanny presence, especially when they’re of the drier variety, such as those of ‘Grey Walls’.

Instrument positioning depends largely on the track, but it seems each subtle variation on placement has been considered carefully and as a result matches the mood of the piece. The guitars of ‘Read About Love’ are spread across an arc between the front left and right channels while chorus vocals appear midway between front and rears, whereas ‘I Feel So Good’ features subtle solo guitars in front right and rear right.

Following the stunning percussion break midway through ‘Grey Walls’, guitars can be heard coming from all directions, forward out of the soundstage towards the listener and then gently receding, just like the moments of madness conveyed by the song.

‘Backlash Love Affair’ and ‘Mystery Wind’ are the album’s two most active surround showcases. In the first, the heaviest rock-with-an-Olde-English-feel influenced track on the disc, a strong centre vocal holds court while a powerful, gut wrenching bass-line thumps away from the LFE channel. ‘Mystery Wind’ is a mixture of tuneful bass guitar and percussion much in the Fleetwood Mac style and it’s here that one also really appreciates the outstanding fidelity afforded by this particular DVD-Audio disc. It’s hard not to resort to tired audiophile mumbo-jumbo, but the soundstage depth really is expansive and deathly silent behind the instruments, which are also noticeable for their purity and ones ability to discern every last nuance of instrument timbre and playing style.

Throughout the disc I was also struck by the depth and dynamics of its low frequency component, never more so than during ‘I Misunderstood’, which delivers not just great bass weight, but a smooth and integrated low-end. Another positive element is the way vocals and instruments are beautifully balanced in terms of level, the quiet, whispered female “misunderstood” is almost impossible to discern on the CD version of this track yet is ever present, albeit subtly, from the DVD-Audio disc.

Listen out too for the snappy attack of the snare drum and mellow fading guitar during ‘Why Must I Plead’, the eerie circling vocals of ‘Psycho Street’ and the fun of ‘Don’t Sit On My Jimmy Shands’, a jovial track about Jimmy Shands 78rpm polka records which features an accordion over one’s left shoulder, fiddle front left and drums front right that also manages to break into a reel before the fade…

Special mention too for what is now Thompson’s signature piece, ‘1952 Vincent Black Lightning’, presented here in acoustic form – just voice and guitar – in such a convincing manner that it sent shivers up and down my spine. One has the sense of being in the same acoustic space as Thompson even though the surround channel pallet isn’t used in an obvious way. The impression of being able to reach out and tickle the artist’s chin just isn’t there when the same track is played through two channels, which should be example enough of why multi-channel is the way ahead, even for basic acoustic recordings, and why, even though this disc has a two-channel PCM mix, I didn’t feel compelled to write about it.

1509.75kb/s DTS and 448kb/s Dolby Digital are provided for DVD-Video backward compatibility and can also be easily selected in DVD-Audio players – although I’m not sure why you’d choose a lossy compression scheme over the loss-less MLP alternative. However, it does seem EMI have covered all the bases where sound options are concerned, three different types of 3/2.1 together with a 2/0.0 mix can’t be bad.

More good news… the first track plays the moment your machine’s transport closes, but press the menu button and up pops a brightly coloured set of menus based upon the disc’s original artwork. There’s a Richard Thompson biography, discography complete with short excerpts from selected songs, web links (for DVD-ROM players) and a list of forthcoming EMI DVD-Audio titles. There are also two music videos, for ‘I Misunderstood’ and ‘I Feel So Good’, plus synchronised lyrics during each song.

‘Rumor and Sigh’ is an excellent DVD-Audio disc, Steve Genewick’s surround mix is outstanding, the fidelity exceptional and there is enough bonus material to keep even die-hard fans happy. Richard Thompson’s strange habit of writing up-beat songs about unhappy events might take a little getting used to if you’re new to the artist, but I heartily recommend adding this disc to your collection, if for no other reason than it being a superb example of the DVD-Audio art. If EMI’s output remains this strong, we’ve more treats in store.