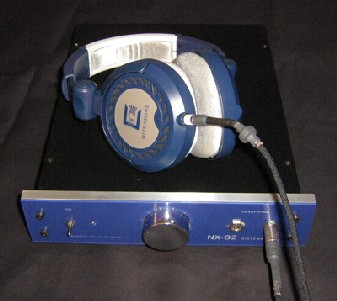 In this day and time where most new music listeners develop their tastes by way of ear buds, it’s been nice to see resurgence in the desire for quality headphones. Having grown up in a time when self-paced lessons included wearing plastic headsets that had the comfort level of vise grips, its always pleasant to put on a comfortable pair of “cans” and push those painful memories deeper in the grey matter of distant memories. Recently, I received an email offering me the possibility of reviewing a “Sistema”, a very peculiar audio combination, something that could be called “a Dynamic Headphone System”. It is an amp/ headphone combo. From one side the amp made by RudiStor, a small Italian based company, and maker of some of the most highly regarded headphone amplifiers available (including electrostatic ones). They teamed together with Ultrasone, the German headphone manufacturer (another European based company) and designed an amp specifically tuned for the Ultrasone’s PROLines 2500 open-air headphones.

About a week later the two pieces arrived. The NX-02 is a beautifully designed unit with a deep royal blue face (matched to the Proline 2500) attached to a thick piece of machined aluminum. A small toggle switch with a bright white diode complements the left side. In the center sits a hefty volume knob with an impressively smooth rotation. On the left sits two full size headphone jacks, a muchappreciated touch for those that may share their music, or, in my case, comparing headphones. The top and sides of the case are slightly smaller in width than the front panel, but are quite solid, with the sides having a bit of Italian design flair with indented horizontal ribs. The back is clean and simple as well, with the three-way detached power cord receptacle on one side and the left and right high-quality RCA jacks on the other. Overall the fit and finish is outstanding, with a feel of solidness throughout.

Inside, the design is an all Class A, which means the unit does get warm but nothing like a large set of mono blocks. The NX-02 has two OPA Burr Brown chips in the input stage and discrete buffers, according to RudiStor S/N ratio is about -115db (CD has 96, SACD has 105, just as a reference). The PSU has been modified from the sibling NX-01 to a more beefy one, capable of more current with a lot better ripple (filtering) it was tailored specifically for this headphone, as it is a current demanding set of cans. A nicely-sized torridal transformer shows the seriousness by which RudiStor takes the idea of quality dynamic capability.

First impression I had when I opened the headphone box was that the 2500’s were going to be strictly an indoor product. Their overall size and design make them appear to be heavier then they actually are. Lifting and examining them reminded me of how nice the fit and finish of a Honda automobile interior with the rubberized plastic. Like many other high quality headphones, the 2500’s come with a separate cable (actually two, straight and curled). Connect is made via a very deep and solidly connected mini-din headphone plug. The opposite end holds a full-size plug, a reminder that this unit belongs with a home audio rig. The heavy felt pads come off easily and are replaceable thru Ultrasone. A third pad is attaché across the crown of the headband. The headset collapses with the earpieces folding in, and under for compact storage. For the allimportant test of comfort, the Proline 2500 do fit snug, but after one song I no longer noticed the “grip”, even while wearing my glasses. I still felt them, but it was comfortable in all respects. 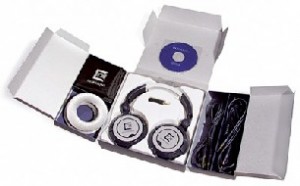 The Ultrasone design places the driver at an offset angle rather than firing directly into the ear canal.A feature I very much appreciated is the fact that the performance of the Ultrasone’s operates at 3 to 4db lower than other headphones with same output quality. In my case, it meant being able to still hear my wife’s request for action on various honey-do’s. Most importantly, it assists in protecting the users hearing, and that is good news for everyone.

Note: All review session were completed using my Sennheiser HD477 headphones as a comparison. It should be noted that the HD477’s are an inexpensive model designed for iPod/mp3 players. 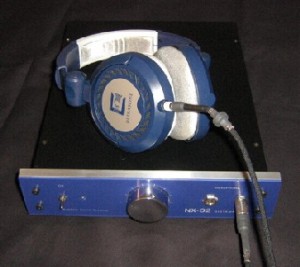 I began by listening thru my iPod, true to the literature; the 2500 are not designed for portable listening. The sound was bland and unimpressive. I then moved to my demo disc thru my Harman Kardon home theater system since it contained a headphone jack. The sound was nice, with some hints of detail, but nothing exceptional by any means. I then switched over to using the RudiStor NX-02; the first thing I noticed was the incredibly low noise floor, just the music, and nothing more. Secondly, while playing Donald Fagan’s latest title track, Morph the Cat, was the depth of the bass, and how distinct it sounds. The 2500’s are listed as being able to dip down to 8hz; I have no doubt that that is true, as the amount of different low frequencies was far greater than what I have been hearing from the various monitors around the house. Third, and most impressive, is the soundstage this paring creates. I sat in my chair and could point to various positions in front of me with my eyes closed as the place where a certain instrument was located.

For my critical listening sessions I initially focused on vocals. I began with the finest female vocalist in my opinion recording right now, Allison Krause. The purity and ever so slight twang in When You Say Nothing At All, was breathtaking in its reproduction. Wanting hear more female vocals I moved on the The Magazine by Ricki Lee Jones. If there was ever a voice that could separate subtlety from mush it’s her soft vocals. On lousy equipment those soft passages are almost unintelligible, yet when played thru the Rudistor every word is distinct and understandable.

With male vocals I turned to Dan Fogelberg, whose range goes from short and clipped to very breathy at times. Having heard him from the third row I have a pretty good feel for what his voice is like. In his mildly successful single Forefathers, the different regional accents drift on thru, from the Illinois nasal, to Memphis twang, to clipped Los Angeles consonants, to the breathy high altitude of Colorado and New Mexico. These characteristics did not appear until played thru the NX-02, therefore, the little blue amp gets credit.

The second phase involved different instrumentation. This is where I felt that the amp would either show its chops or fall victim to its limitations. With multiple instrument rock and roll music provided some wonderful opportunities to experience bass guitar and drums in mass of sonic furry. Drums, in particular are an absolute joy with the Rudistor/Ultrasone combination. The sounds are quite distinct, and the imaging was pinpoint from on tom to the other. Bass guitarists should be fans of this setup as the deep frequency response demonstrates the incredible skills of such great bassists as John Entwistle. His work, so often overlooked, is hard to miss with this combination. At times I felt like I was hearing a new rendition of songs.

On of the great surprises was hearing the instrumental separation in the classic song, Don’t You Worry About A Thing (original version). So many times these wonderful classic 1960’s recordings suffer from the recording limitations of their era. With the RudiStor/ Ultrasone pairing, little details emerge adding to the happy tapestry of Sergio Mendez hit single. Modern jazz was presented in crystal clear fashion. A few songs lacked the emotional connection that I normally feel when listening thru my main audio rig in the living room. Most tunes, however, were quite engaging. What were most pleasing were the classical jazz choices of Miles Davis’ Kind of Blue. Being a newbie to this genre, I let our jazz writer Clarke Robinson suggest this album as a starting point.

I came into this review open to being either impressed or disappointed based on my lack of experience with high-end headphone amplification. After dozens of hours I can now say that I am a fan of the headfi world. If my main career had involved office cube life, or I lived in an apartment with thin walls, I know that I would invest in this system. One thing is for sure, the next time the dog behind me starts it’s obnoxious bark/howl, I’m heading for the headphones for a return to beautiful melodies minus any canine intrusion. 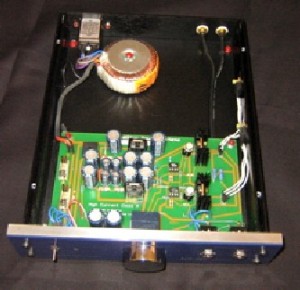 The NX-02 must be considered another fine example of the outstanding reputation of RudiStor headphone amplifiers. It’s pretty rare in the audio industry for one company to design a product exclusively to be used with another. It’s a bit of a gamble, but in this case for RudiStor, it has paid off. The NX-02 amplifier is a fine example of audio engineering, with it’s straightforward design, and clean sound reproduction, its bound to make it onto the finalist lists of those who savor the world of headfi.