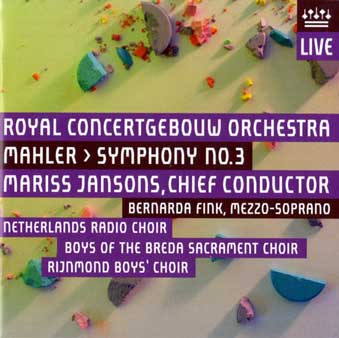 This has proven to be a watershed year for Shostakovich, the centenary of his birth serving as gateway into the pantheon of great composers (at least for most listeners, pace Pierre Boulez). The flood of releases honoring Shostakovich this year is not a great surprise, but what is a great surprise is the number of truly great recordings we’ve seen. This new release from the Royal Concertgebouw Orchestra’s in-house label, RCO Live, lands in very distinguished territory, and if it doesn’t ultimately end up in the final handful of greatest recordings from the centenary year, it is perhaps only because of the piece itself, which isn’t in the highest echelon of this composer’s output. Shostakovich’s Seventh initially received an enormous amount of publicity, both due to the composer’s fame (via a magazine article in the U.S. which featured pictures of Shostakovich in his firefighter’s helmet, as he helped preserve Leningrad during the Nazi siege), and to the remarkable premiere, held in the besieged city and broadcast over the walls to the lurking Germans. The score was then smuggled through enemy lines and out of Russia on microfilm, leading to some very high-profile performances in the west by the likes of Toscanini, Stokowski, and Rodzinski. But in time the Seventh seemed to dwindle in stature as Shostakovich’s true Everest, the Symphony No. 8, emerged from the shadows and became known. That led to a period of neglect of the Seventh for many years. But ever since Leonard Bernstein’s great late recording of the work with the Chicago Symphony for Deutsche Grammophon in the late 1980’s, the piece has made something of a comeback, receiving several high-profile recordings, including ones by Rudolf Barshai and Valery Gergiev. Reviewing the field at this juncture, my take on the Seventh is that this wave of interest will also pass, leaving the work regarded as respectable, though not quite a masterpiece.

The first recording of this work to appear on SACD was the Philips release by Valery Gergiev, previously reviewed here. That release featured the combined orchestras of the Kirov Theatre and the Rotterdam Philharmonic, Gergiev’s two orchestras at the time. In sum, it is a typically swaggering performance from Gergiev, with volatile tempo fluctuations and an unusually grim finale. The recorded sound is good, though not at highest possible resolution, though the depth of texture from the two combined orchestras is impressive. The all-time king remains the second Bernstein recording, mentioned above. It features effective (though not ideally clear) standard-resolution digital sound, and the masterful control of a veteran conductor at the height of his powers. Bernstein takes an epic view of the piece, conveying through sheer willpower a momentum and belief in the music that give it an extra boost. It is no coincidence that Bernstein and Gergiev offer exceptional recordings of the piece. Without sheer attitude, the work doesn’t quite break through onto that higher plane where the composer’s finest works breathe. This new recording by Mariss Jansons is especially successful in that it almost – almost – combines sufficient attitude with a straightforward, classical approach. Such an approach is characteristic of the Barshai recording available in the super budget set of the complete symphonies from Brilliant Classics, and like Barshai’s, Jansons’ performance never quite convinces me that there is any great advantage to approaching this music rationally. After all, what does it mean? One can say, of course, that it is abstract sound and that it really means nothing. In that scenario, the piece is deficient, because something programmatic is presupposed by the narrative quality of much of the music. Themes ebb and flow, return and grow, changing for some reason. In their comings and goings, they say a great deal. So it seems inescapable that there’s a program. But what? The Nazi invasion of Russia? The Stalin regime’s destruction of Russia from within? Something else personal and private that we don’t even know about?

Jansons lets the questions answer themselves as he leads a straight course through the work, but he never leads blindly or blandly. The opening is strong and proud in his hands, the rich sound of the Concertgebouw coloring the music warmly without vitiating its drive and purpose. Indeed, in sheer terms of focus and energy, he bypasses Gergiev’s somewhat diffuse opening, and is a world away from the broad epic Bernstein begins spinning from the very first note. Indeed, among other recordings, the one which most resembles Jansons’ pluck is the 2004 recording of the Osaka Philharmonic led by the fiery Eiji Oue. That recording is available in multichannel SACD, though I’ve only heard it in its regular compact disc incarnation. It is on the Japanese Fontec label which apparently has no distribution outside of Japan and must be purchased at a premium and shipped to other countries. Granted, the Osaka Philharmonic is not the Concertgebouw Orchestra, but they are breathing hot down the necks of the world’s greatest. Above all, the excitement of Oue’s performance is its selling point. His other recordings lately coming out of Osaka (including an outstanding Mahler Sixth) prove that he is a fine conductor, though as with all inspirational energy-driven conductors, the intensity of any performance flies or falls based on how much he can inspire the orchestra at any given moment. Thus, as in Gergiev’s performance, the attention wanders now and then in Oue’s Leningrad Symphony, but the intensity of his finest moments rivals the best in the catalogue. Jansons, in contrast, surrenders a little of his momentary intensity to hold the long-line of the score together. I’m not always a fan of that approach, but Jansons is quite correct in diagnosing that this score needs a firm hand on the driving wheel to keep it on course.

Outside of Bernstein’s awe-inducing epic account, I would rank Oue as the winner of the sweepstakes for most effective climax to the first movement. He sprints ahead like Gergiev at the peak, but the impact of his recorded sound is far better, despite also being recorded live in concert. Jansons, however, keeps the lid a little more firmly in place on the movement, putting more emphasis on the movement’s opening pride and closing disillusionment, whereas Oue and Gergiev clearly focus their energies on stoking up the fires of the mad march in the center of the movement. The latter two are more exciting as the moment builds up and then passes, but Jansons makes the better long-term symphonic argument.
The tempo for the second movement seems to depend on just how scherzo-like each conductor thinks it needs to be. Emphasizing the traditional symphonic characteristics of the work, Jansons thinks that it should be treated as a scherzo, despite the moderate tempo marking. Thus, his recording falls on the fast side of the spectrum (though Mravinsky, Barshai, Kondrashin, and even Oue are faster). Gergiev and Bernstein clearly envision a different approach with noticeably slower speeds for the movement, finding a certain desolation that faster versions lack. Bernstein in particular, three-and-a-half minutes slower than Jansons, takes the music into visionary territory whereas the lighter-handed scherzando treatment merely leaves the main theme sounding uneasy, and the faster middle-section gets almost dancelike. Again, fine for a “pure” symphony (whatever that is), but questionable dramatic footing for a work so heavily dependent on a programmatic interpretation.

Jansons’ Adagio third movement packs a good punch because his tempo is broad, emphasizing contrast with the previous movement, even if it isn’t as epic as Bernstein’s. If I had to pick one movement from this recording as Jansons’ finest moment, it is this third movement. Oue and Gergiev push hard on each passionate gesture, but fail to hold it together coherently, whereas Jansons makes it all unfold as one grand, spacious statement. Only Bernstein’s superhuman grasp makes more of this Adagio.

The finale is where all approaches either make it or break it. And as much as I admire many of the features of Jansons’ performance, I don’t feel like he rises up to the challenge of the ambiguity of this music, preferring instead, like Barshai, to close his eyes, lower his head, and batter his way through the closing pages of the finale at a fast clip. Gergiev is very challenging in his unusually slow approach to the finale, though after living with his recording a few years, I’m still not convinced by it. I think the point of the finale is mixed feelings, whereas Gergiev goes out of his way to make the movement as leaden and heavy as possible. Perhaps that fits with the modern image of Shostakovich as dissident-hero, but I find it a little too “black-and-white” in what should truly be a disturbingly gray world. The two who nail the finale are Leonard Bernstein and his former protégé, Eiji Oue. Whatever momentary ebb-and-flow issues may mar the progress of Oue’s symphonic argument, he correctly gives the finale enough weight to be oppressive without losing the sense of exhilaration.

RCO Live’s recorded sound is very good, though the old bête noire of the Concertgebouw’s acoustic liveliness rears its head again. The hall often makes for beautiful recorded sound, but it also has a tendency to be boomy. It is notoriously difficult for engineers because it is said to change sweet spots and reverberation points as the weather changes outside. Additionally, its warmth is perhaps better suited to lush music than to the stark fists and bones of middle-period Shostakovich. Indeed, though part of Bernard Haitink’s Shostakovich cycle was recorded in the Concertgebouw, the Decca engineers in those recordings went to extremes of multi-miking to try and master the boom. They were only partially successful, and the RCO Live engineers in this recording are not 100% successful, either, though they get far closer than Decca did, with the additional bonus of avoiding garish microphone spotlighting. The pickup for the RCO Live disc is moderately close. The Oue is closer, the Gergiev more distant. The surround channels of the RCO Live SACD are well-judged, creating a sense of being in the performance space, without turning into an exaggerated wash of sound. Only a touch more clarity would be needed to recommend this as ideal sound. Again, I haven’t heard the multichannel SACD incarnation of Oue’s recording. If the redbook CD is anything to judge by, that SACD should have a slight edge in clarity over the RCO Live, as it is recorded in a less boomy hall, with an even closer microphone array (indeed, so close that it picks up page-turning and squeaking chairs). Both outpace the Gergiev, which, though fetching, is a touch diffuse in impact and is recorded at a lower resolution than Jansons and Oue, which are both high-resolution DSD recordings. It is worth mentioning that the Jansons and Gergiev both have much less audience noise than the Oue. What this probably means is that those two recordings are most likely heavily edited with patch-up session takes from after the concert (thus contributing to the boominess). The Oue gives the warts-and-all feel of being right there at the concert, which for anyone accustomed to attending live concerts intensifies the atmosphere. Shut-ins and audiophiles may prefer the quieter part live/part studio recordings, though.

In the end, the finest Shostakovich Seventh remains Bernstein’s DG account, for it dares to treat the work as great and carries it through on sheer chutzpah. Among the contenders on multichannel SACD, Jansons is the clear choice for anyone wanting a focused, classical account. Oue edges out Gergiev interpretively, for those wanting a more wayward and emotional version.