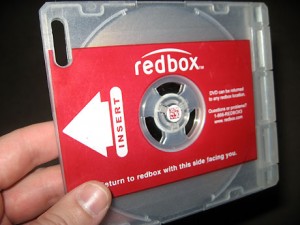 Somewhere, whoever’s currently running Blockbuster just broke out in a cold sweat because Redbox is getting IDEAS, and they’re not very friendly ones.

Seems that Redbox is looking into the idea of expanding its offerings to include digital downloads, allowing customers to download movies from central Redbox kiosks to customers’ own media like SD cards, USB devices, or other similar media.

It’s almost certainly not going to happen, at least not until Redbox agrees to some kind of window arrangement like the studios want.  See, the studios are basically only holding Redbox, pretty much the last holdout of the digital scene, at bay because they’re limiting the amount of DVDs that Redbox can get its hands on.  Redbox is working around this by going to the retail level, and even that’s starting to turn against them as the studios exert pressure on the retail outlets.

But if Redbox should ever no longer NEED product–as would be the case with digital download, they’d only need what amounts to one copy across all their machines–then the studios’ effectiveness in blocking Redbox would be minimal.  So there’s probably no way that the studios will allow Redbox to get digital rights UNTIL Redbox toes the line on release windows.

And that spells a big note of trouble for Redbox’s plans.