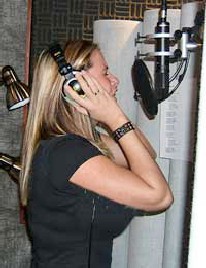 Along with the advent of multi-track recording (an idea conceived by Les Paul and put to practice originally by Ampex), new microphone techniques were also developed to record each instrument individually. This method is called close micing. 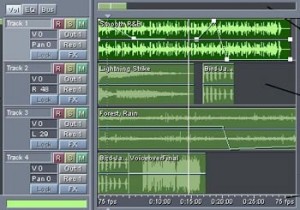 For example, vocals can be recorded on their own track, which gives the ability to re-record or edit without effecting the rest of the music. It is also possible to record multiple tracks of the same performer to make it sound like there are more than one of them. The most common technique for studio vocals is a cardioid capacitor mic suspended a few inches in front, and just above the singers mouth. This gives a very clean and clear sound. Sometimes though, a more chesty sound is desired and in this case the mic can be lowered to be just below the singers mouth.

This literally picks up more sound from the singers chest cavity and gives a fuller, but often less clear sound. Some singers find it hard to perform well if they are stuck on a spot in front of the mic making it difficult to get good results so in some instances a hand held stage mic may get overall better results. Using a hand held mic reduces the sound quality but at least theperformance is good! There are some hand heldmics which have very good sound quality though,such as the Sennhieser e865 mentioned in a previous issue, and the AKG C5900 and C5 – all hand held capacitor cardioid mics. 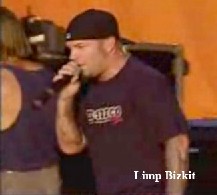 In live performance the best technique is usually to get the mic as close to the mouth as possible, reducing bleed through from other performers. In the studio there is more freedom, and it can help for the performer to hold the mic at a slight angle such that direct air from the singers mouth does not cause popping in the mic. 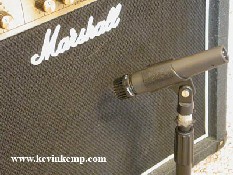 To record a guitar amp a mic with high SPL handling ability is a god idea. The most common technique is to use a cardioid dynamic mic such as the Shure SM57. With the mic placed just a few inches from the woofer of the amp, the sound can be tweaked by moving it nearer the center of the cone or towards the outer perimeter. Placing the mic near the center of the cone gives a more lively edgy sound, while the outer perimeter gives a more mellow sound. Many amps have ab open back where a lot of the sound also comes from. It may helps to get the sound you want by putting a mic at the back of the amp or possibly even inside the back. If the front and back are recorded then remember to invert the phase of one mic! An electric guitar can also be plugged directly in to a recording device via an effects box that adds distortion through digital processing, so some electric guitar recordings will not have been through a mic at all. 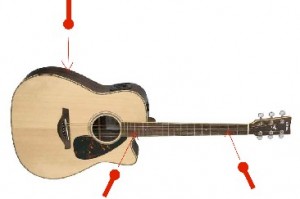 Acoustic guitars are quite a skill to get right and are very sensitive to mic position and the environment they are recorded in. First, a quiet place to record is needed as an acoustic can be very quiet and subtle. Placing a good capacitor mic in front of the sound hole of the guitar is the most obvious thing to do, but it gives give a very resonant sound. It also picks up a lot of strumming and very little finger movement on the frets. On the other hand, placing the mic nearer the head of the guitar, say around the 3rd fret gives a very clean sound with lots of fingering but can sound overly thin and lacks the rhythmic sound of the strumming. A good compromise is to place the mic a few frets up from the sound hole, say around the 17th fret. Another method is to record in stereo, with one mic near where the neck joins the body and another near the head of the guitar and pan them between the speakers to give an impression of the physical size of the guitar. A microphone placed above the guitar body pointing downwards can pick up the resonance of the instrument without so much of the strumming or fingering. A neat trick when recording guitars in a room that is too dead, is to place a large piece of thin wood on the floor below the guitarist to liven up the sound. Lastly with regards to mic techniques, the drum kit. Quite a complex bit of kit to mic up as each drum is almost treated as a separate instrument. The drums are the engine of a band, and is one instrument the engineer and producer always like to have great control over. Cymbals are recorded with a pair of mics positioned above the kit.These are called the overheads, for obvious reasons. They mainly pick up the cymbals, but also provide the ambiance and natural positioning of each drum in the soundstage, which is then over layered with each individual part of the drum kit recording. A more ambient sound can be obtained by having the overheads quite high above the kit, or a more direct sound by having them closer. 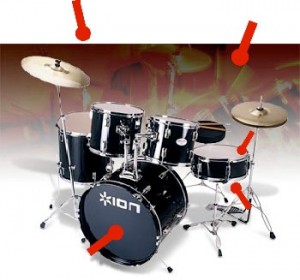 The snare is separately miked, often with a clipon, highly directional mic very close to the rim of the drum and about an inch from the skin. The tonality can be altered a lot by how close to the rim of the drum the mic is angled. The bottom of the snare, where the actual snare is, can also be recorded to give a crisper more lively sound. The two mics are on either end of the drum, so the phase of one must be inverted. The kick drum is miked up separately since it often has to be good and loud in the mix and given a lot of dynamic compression. Some kick drums have a hole in the front where a mic can be fed through and placed just a few inches from where the head of the pedal hits, giving more of a snappy sound. Due to the very high SPL and low frequencies of the kick drum a special dynamic mic is needed. Depending on the importance of the tom drums in the song, they can either be left for the overheads which gives a rather resonant sound lacking in impact, or they can be individually miked as well. On a standard 7 or 8 piece drum kit as many as 8 microphones may be used. An absolute minimum of 4 mics is needed for a 7 piece. Interestingly, when you think about how the microphones are nearly all placed over the top of the drums, not in front, what you hear when you listen to a recorded drum kit is actually closer to floating over the top of one, not standing in front as you would in real life! Well that about covers it for microphone techniques.
Next issue (and next year!) we can start on something new. Take it easy, and have a good Christmas!