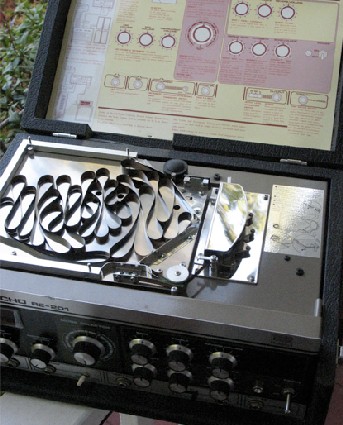 Hi, guys and gals. Sorry I missed the last two issues. Work has kept me rather busy of late. But now I’m back with a new article about a number of common effects used in the studio, and how they work.

The effects I am going to talk about here are Delay, Chorus, Reverb, Harmonic Exciter and Auto-Tune.

The delay is pretty much as it sounds, a delayed version of the original sound, providing an echo-like effect. Despite its simplicity, it is still used a lot, especially on vocal tracks and on chill-out music on drums and such. In the past, before digital technology was commonplace, the delay effect was created using a reel-to-reel tape machine with a short loop of tape that went round and round while the tape machine recorded and played back at the same time. With the record and playback heads separated by some distance, there would be a delay between the original signal and that recorded and then played back by the tape. By adjusting the distance between the record and play heads and / or the speed of the tape, the delay time could be adjusted to suit the music. An erase head was also mounted before the record head so the previous delay was not played back a second time. If more than one delay was needed, the first delay could be fed back to the tape machine with an attenuated level so that the delay continued until the level was below audibility.

In this modern age of course, all that is needed is a bit of electronics to digitize the signal, hold it in memory for a moment and convert it back to an analog signal at the right moment. This effectively does the same job as the tape delay but holds the signal in digital memory rather than on analog tape. 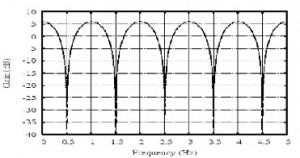 The Chorus effect is very similar to Delay, only the delay gap is far shorter, such that the recorded signal is replayed while the original is still happening. By having a very short delay gap, the sum of the original and delayed signal causes combfiltering from cancellations between the two signals. The delayed signal or signals are also modulated slightly in pitch. The overall effect is similar to that of multiple people singing at the same time, giving a richer, smoother vocal sound. Eminem uses something a bit like this on his recent works to give his voice a fuller sound when compared with earlier releases like ‘The Real Slim Shady’.

Reverb is another effect you are no doubt familiar with. While a delay or echo would be equivalent to a reflection bouncing back and forth between two parallel surfaces (such as under a bridge), reverb is the sum of many reflections bouncing around a very complex shape (such as a large hall) and arriving at the listener spread out in time. The great number of reflections, with no obvious repetitive pattern, gives a much smoother sound than the plain echo.

There are three methods to creating reverb. The first is simply to place a speaker in one corner of a large room, and a microphone in another. By feeding a signal to the loudspeaker and recording what the microphone picks up, reverb can be added to any signal. While this is simple, it is of course quite impractical to have a huge room on hand at all times where reverb might be required. It is also quite inflexible, as the room will sound as it does, and little can be done to change that without going to great length.

The second method, one of the first electronic reverb systems, is the Plate Reverb. This is made by taking a large sheet of metal, usually steel, and suspending it in a frame where the tension holding the sheet metal can be adjusted, thus tuning it like a drum skin. A transducer similar to a loudspeaker driver is fixed to the center of the plate and a signal fed to it. The transducer excites the plate of steel, and the sound waves traveling back and forth along the steel create a reverb-like sound. Microphones at either end pick up the vibrations and send them back to the mixer desk. Adding certain amounts of feedback can also create interesting results.

The most common approach to artificial reverb today is of course digital signal processing. As explained above, reverb is essentially the arrival of many similar reflections, all delayed slightly differently from the original sound. The simplest way to recreate this artificially is to have a large number of simple delays, set to different times, feeding back on themselves. However, it has been found that over 1,000 separate delays per second are required for the ear to hear reverb rather than echo. Even with a short delay, about 40 such delay machines running together would be needed to create the desired 1,000 delays per second. One way to increase the number of delayed signals with the same number of ‘delay machines’ is to take the output of the group and feed it back to the beginning such that the number of delays are multiplied. The complexity of these systems means that they are only really practical with digital technology, and this is how the simple units work. 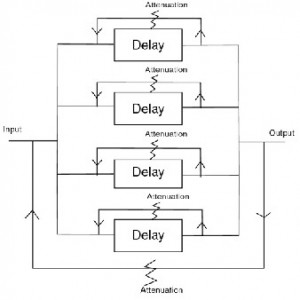 Highly advanced digital delay systems now exist that work by a virtual environment being modeled, such as a hall or auditorium. A great number of reflection paths are traced (called ray-tracing), and the sum of those reflections are calculated for a point of arrival in the virtual environment. This method requires enormous computing power, but very realistic reverbs can be created, based on real places or anything that can be thought up.

The next of our commonly used effects is the Harmonic Exciter. This effect is used mainly in mastering of a final track, to add sparkle and zest to the high frequencies, and also to add the perception of deeper bass to the low frequencies.

Harmonics are just multiples of a certain frequency. For example the harmonics of 1KHz would be 2KHz, 3KHz, 4KHz, etc. The harmonic make-up of different instruments is what gives them their particular sound, rather than being a pure tone. Some instruments have non-harmonically related spectral structures called partials, but this is another subject of its own.

By varying the harmonic make-up of sound the timbre can be changed, giving it a richer or more shimmery tone, etc.. While high multiple harmonics can sound rather nasty, the 2nd and 3rd harmonics (i.e. 2KHz and 3KHz in the above example) is quite acceptable to human ears and in high frequencies can be quite nice, adding a bit of life and shimmer to the sound, making it more exciting. In the low frequencies, where many small speakers can not reproduce the fundamental tone, for example 30Hz, we can add 2nd harmonic at 60Hz, which our speakers can reproduce. Our brains, clever as they are, can actually lock on to these and realize that there is in fact a lower fundamental at 30Hz filling in the blanks to some degree. This is how some recordings seem to have impossibly deep bass, even over small speakers. 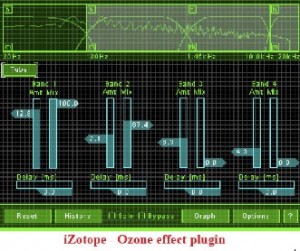 Auto-tune, the final effect of discussion in this article is a relatively new invention to re-tune vocals and some instrumental performances to ‘allowed’ notes or keys set by the user. It will monitor the pitch of a singer by dissembling the signal in to its separate frequency components using something called a Fast Fourier Transform algorithm. Any variation of the singer’s pitch from the nearest ‘allowed’ note will be counteracted by a pitch-shifting process, and then reconstructed as a standard audio signal by Reverse Fourier Transform. The overall result of this process is that a singer can only sing in the musical key set on the effect unit, even if the singer’s real pitch varies. This is provided the singer’s pitch does not vary more than the distance between the allowed notes, or it will then lock to that note which is closest. Sometimes the auto-detection of the intended pitch is not ideal, so manual tuning can be done where a user tells the effect unit what the pitch is meant to be adjusted to. 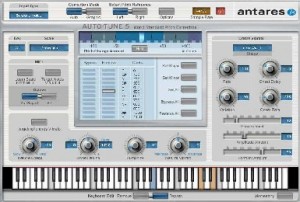 Using the effect to re-tune a vocal beyond just a small amount results in a distinctive electronic vocal sound that was first used intentionally by Cher on the track ‘Believe,’ and has since become a popular effect beyond its original intended use.

Previous issues in this serie: