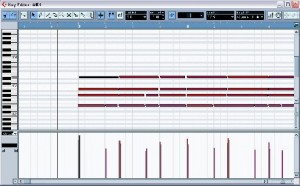 The studio technology I’m going to discuss this issue is something called MIDI, which stands for Musical Instrument Digital Interface. If you are keen on computers you may have heard of MIDI as a file extension for computerized music that uses sounds built in to the sound card or operating system, but it can do a lot more than that.

MIDI is a language for communication between electronic instruments. It records the note played, the velocity at which it was triggered, the sustain, and more. The result is a language that can record, and reproduce exactly how any keyed instrument was played. It is important to make the distinction that MIDI is simply a language describing how something was played, not a recording of the actual sound. It can also be used to record parts for non-keyed instruments such as guitar and drum sets, though it is not quite as well suited to describing the playing of these.

To take the case of a Piano piece played on an electronic keyboard, MIDI would work by recording how the keys were pressed, and this would trigger pre-recorded sounds of a piano held in an external sound module or on a computer. In the sound module there would be a different recording for each note of the piano, and there would also be multiple recordings for how each note is played from soft to hard, as this obviously changes how it sounds. Should this MIDI recording be played back, the same sounds that were triggered during the original performance would simply be triggered from the sound module again. If it were played back on a different system, the pre-recorded sounds for each note could be different, and so it would sound as though the piece was performed on a different piano. In the case of a MIDI drum kit, each note in the MIDI system represents a different drum and there are again multiple recordings that can be triggered for each note dependent on how hard that drum was played.

So far this may all seem like a very round-about way of recording a performance, but the advantage is in its flexibility. Unlike with a recording of an instruments actual sound, MIDI having simply recorded how something was played, can be edited in any way. For example if the wrong note was played, it is possible to simply change the note. If the note was held too long, or pressed too hard, just edit it! Further to this, the sounds the MIDI is triggering can be changed. A performance played on a keyboard can, for example, be made to trigger recorded sounds of a Sitar, and the details of how something was played such as the velocity, sustain, pitch-bend, etc can all be related to how the Sitar is played. A drum performance could also be played from a midi keyboard, so an electronic drum kit is not strictly required.

This of course leads to the production of virtual, MIDI triggered instrument sound banks, probably the most popular of which is the VSTi (Virtual Studio Technology Instrument). These are essentially collections of sounds that can be triggered by any MIDI signal. A superb example of this is the Orchestral VSTi made by Edirol, that is practically an entire orchestra that can be controlled by MIDI. It boggles the mind to think of the dedicated required to record, separately, every note of each instrument in an orchestra, in the many ways each note could be played. 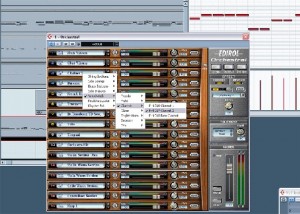 Due to the incredible ability of MIDI to control the sound of practically any instrument you can think of, it is the natural first port of call for composers writing a first draft of a song. The composer can write the part of every instrument in their composition, even if they don’t have the skills to play it in reality, and are able to hear a reasonable representation of how the final performance will sound once all the flesh and blood performers have recorded their part. The MIDI part for each performer can even be converted to standard musical notation (or ‘tab’ for drums and guitar) to be printed out for the live performer to play.

The physical MIDI interface is based on a pair of DIN connectors, one for outgoing MIDI signals, and one for returning signals. Most MIDI kit also has a thru connector, such that equipment can be daisy-chained together.

There is another use for MIDI in the studio other than instruments, and that is to control the other equipments settings. As MIDI is simply a language of numbers to be interpreted in any way, it can be used to send signals to things like an EQ, reverb, compressors and more. The codes it sends will control detailed settings such as the gain, the center frequency, Q, and so on. In this way. a large amount of the equipment in the studio can be controlled from a central computer system or digital mixing console. EQ settings, compression thresholds, noise gates, reverb effects and more can all be saved and recalled. In the days before MIDI, if settings needed changing in the middle of a song, someone had to be standing there ready to do it, and all the settings had to be written down by hand so that they could be set again if you wanted to go back and work on a song at a later date. 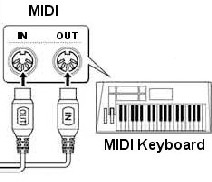