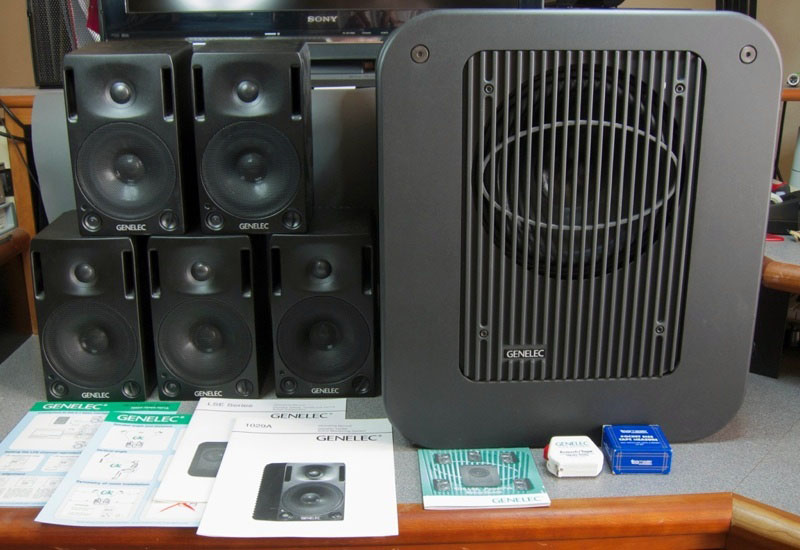 In these articles we have covered a little bit about acoustics, the technology of microphones and microphone techniques. Today we can look at monitoring, mainly in the studio but also for live performance.

Active means that the loudspeaker has the amplifiers connected directly to the drivers. There is no crossover circuit (to split the signal between the tweeter and woofer) stuck between the amp and speaker driver. Instead, the crossover circuit is before the amplifiers and there is a separate amplifier for each frequency band & driver. The first advantage this allows is that the amplifier has better control over the driver, especially the bass driver. Due to the lack of big inductors and their associated electrical resistance the amp can achieve its full damping factor. Second, it means that the crossover only has to work on the low-level signal before the amplifier, so lower distortion components and circuit design can be used. Thirdly, stronger filtering is also made possible and the drivers will be less stressed outside of their intended bandwidth.

Professional monitors are grouped in to three categories, near-field, mid-field and far-field. Each is used for certain tasks, but the main difference is most obviously the size. Near-field monitors are about the size of a bookshelf loudspeaker and are usually placed on the meter bridge of the mixer, or on either side of a desk at a digital audio workstation (DAW). The definition of near-field listening is where the direct sound from the monitor must be dominant over the reverberant sound of the room – achieved by sitting very close to it. A small monitor such as this is commonly for hearing the tiny details of a single track, listening for defects. It is the audio equivalent of a magnifying glass. The other common use of a nearfield is to hear what a recording sounds like when played back on smaller speakers that are less bass capable and dynamically limited compared to the larger monitors.

The Genelec previously pictured is a very common near-field monitor used for hearing small details and defects. The venerable Yamaha NS10 that you will find in nearly all studios is another near-filed monitor, but used mostly for assessing a recording on a smaller more domestic-like speaker. The NS10 is widely used for that very reason; everyone has a pair. So a customer can walk from one studio to another and right away have a point of reference. No doubt it sounds bad, but that is pretty much the point! The Genelec and Yamaha NS10 are very different monitors used for different tasks, but are both nearfield.

Mid-field monitors are pretty straight forward. They are larger than near-fields and smaller than far-fields. They are anything from a large standmount to what would, in the domestic environment, be considered a large floorstander. The definition of mid-field listening is where the direct sound is equal to the reverberant room energy. The truth is though, that these definitions are not very strictly applied in a studio control room environment and monitors are simply placed where they work best. A mid-field monitor is often the largest monitor used in small to average sized studios. Speakers such as the large ATC and PMC models, mid sized units from Genelec and Adam are all classed as mid-field.

Strictly speaking, far-field is defined when the reverberant sound of the room is predominant over the direct sound from the speaker. To achieve this, they are listened to from a significant (in domestic terms) distance. Far-field monitors are designed for the very lowest distortion and highest level ability. Most far-field monitors are 4-way or more and are very likely to use horns for the treble and mid. The horns provide higher efficiency, resulting in lower distortion, higher SPL capability and they help control the radiation pattern of the sound. By reducing the amount of sound radiated to ‘unnecessary’ places in the room the reverberant sound field is reduced, but compared with mid and nearfield listening the reverberant field is still very strong. Far-field monitors are used mostly when multiple people in the studio want to hear the sound, and they give the most life-like overall impression of the recording. Just as near-field monitoring is like using a magnifying glass to look for fine details, far-field monitoring is equivalent to standing back from a painting and looking at the whole. Westlake, Genelec, Adam and JBL all make large main monitors. Often custom instillations are built in to the room. It is worth knowing that under farfield conditions, even though the reverberant energy in the room is stronger than the direct sound we hear the direct sound as being dominant. Out mind prioritises sound that arrives first and, to a degree, discards sound that arrived later. If we didn’t have this ability the human race would likely not exist today. It is all part of our natural ability to hear what direction that lion is creeping up from in the forest, despite many sound reflections from all around.

While the term monitor generally refers to the loudspeakers in a studio, the term monitor basically just means to observe, and in the case of sound, to listen. This is done in places other than just the studio control room.

Monitoring can also be done by the musician in the live room of the studio, or by a performer on stage at a concert. In both these situations monitoring is required.

In the case of a musician in the live room of the studio, headphones are mostly used. The mixer desk has a separate output for this and a dedicated mix can be fed to the musician. The mix the engineer in the control room hears is not always what the musician needs to hear to play at their best. Headphones that completely enclose the ear, go loud, and leak very little sound are needed. The Beyer DT100 is widely used across the world for this, but there are a lot of other options out there.

Headphones used in the home usually have an impedance (the load the amplifier sees, think resistance that varies with frequency) of around 120 Ohms. As you know, headphones require a dedicated headphone output. If you connected them to the main amplifier outputs and turned up the volume they would likely pop their clogs, so to speak. However, in a studio environment where so many headphones are used, the idea of having a dedicated amp for every pair is not appealing. This is why you will find many studio headphones have an impedance of more like 600 Ohms! This allows them to be connected directly to the output of a standard amp of 100watts or more without going pop. Also because the amp has so much power it is able to have many, many pairs of headphones all connected simultaneously to its outputs.

On stage there are two ways to give each performer their own monitoring, also sometimes called foldback. For performers that don’t move around very much such as the drummer, a stage wedge is used. This is a style of speaker shaped like a wedge that sits on the floor of the stage angled upwards at the performer. It is capable of very high sound levels but absolute quality is not overly important. The problem with this type of monitoring is that it is easily picked up by the microphones causing feedback, and they can make it hard to separate each performer in the mix. It will also be overheard by the other musicians on stage who want to hear their own different mix.

The solution to this is in-ear monitoring. These are essentially in-ear headphones but they are designed to cut out as much surrounding noise as possible so the musician can only hear the foldback mix, which also allows them to hear themselves. These headphones are fed by a wireless transmitter / receiver so the performer can move around without a wire to trip over. The better in-ear monitoring systems are custom made to fit the ear they are intended for. A mold is taken of the users ear and then the headphone is made to fit perfectly so that noise leakage is an absolute minimum. In-ear monitoring also allows better sound quality which helps the performer and because they can listen quieter, it reduces listening fatigue. Garwood is the inventor, and still has to be the biggest name in custom made in-ear monitoring. Shure and Etymotic also make some good in-ear systems. For those of you that play in a band or go to concerts a lot, or even loud night-clubs, you should have a look at the ETYmotic ‘high fidelity earplugs’. These reduce the sound level without messing up the quality too much. They are affordable, don’t stop you enjoying the performance and protect your valuable ears.