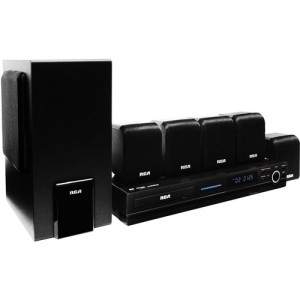 And we end our week with a look at an RCA home theater system. While you may not be happy about its power, or its features, but the price will make up for a great many ills. We’re talking here about the RCA RTD316Wi.

The RCA RTD316Wi is a two hundred fifty watt, 5.1 channel home theater system that offers up an included DVD player, a subwoofer, an iPod / iPhone dock that will recharge your Apple gear in question (it’s also compatible with a whole host of models: the iPod nano in 1G, 2G, 3G, and 4G versions; iPod classic 5G, 5.5G, and 6G; iPod touch 1G and 2G; iPhone 1G, 3G, and 3GS as long as it’s in airplane mode), HDMI output (which will actually work with your iPod video too, and upscale your DVDs), optical audio input, Dolby Digital Surround decoder, rear auxiliary audio connection, component and composite outputs, remote controls, and radio antennas so you can pick up regular radio broadcasts as well.

Admittedly, the RCA RTD316Wi isn’t exactly the most potent system out there. Two hundred and fifty watt is pretty far down the food chain. And there’s not much in the way of connections and suchlike either. Still though, it’s a serviceable system, and it’ll at least manage to do a good job of making things louder.

And it gets better when you consider that the RCA RTD316Wi is currently selling for a hundred and fifty bucks out at Amazon, which is good no matter how you look at it.

So if you’re not looking for much out of your home theater audio–maybe something for a playroom or a basement–then you could definitely do a lot worse than this.