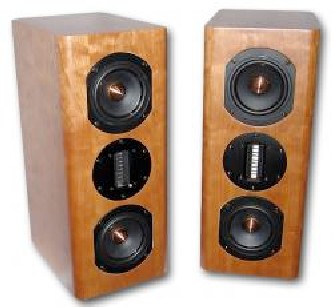 As a regular peruser of the various forums, I get to read about a variety of smaller manufacturers that seem to fly under the radar of the mainstream audio press. Thankfully, with the Internet, those days of struggling anonymity are over. If you make a good product the word will get out, then the key becomes maintaining success as you grow. One such company that has ridden this wave is RAW Acoustics, based in Surrey, British Columbia. Owner Al Wooley has been working on various nononsense speaker designs since 2000. The goal, to combine beautiful sound and cabinetry that can be had at reasonable prices. To that end, RAW Acoustic speakers can be purchased in finished, semiconstructed, and DIY forms. The result is still the same, acoustically fine speakers. 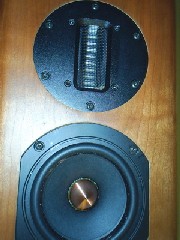 Only a few days after A$$A’s forum opened on AudioCircle.com, I received an email from Al, asking if I would be interested in reviewing a pair of his speakers. Knowing that he had an MTM design, I jumped at the chance to review the HT-2’s. Al explained that the speakers were just finishing an audition for a customer in Florida and would be shipped in a few days. True to his word, about 10 days later a custom designed box (for multiple shipping) arrived. Normally, I would send any speakers to the closet for a week of hidden break-in time. In the case of the HT2’s that wasn’t needed. Good thing as my wife and I had just moved into an apartment as we searched for a new home.

The HT2’s cabinet is made of 3/4in MDF, wrapped in a fine cherry veneer (other woods are available). The curved vertical corners reduce the visual size of the speakers. The grills attach by way of magnetic tabs inset below the veneer. The version reviewed had two ports on the back lower half separated in part by a single set of binding posts (dual binding posts are an option).

The first surprise is how the copper phase plugs makes the 4.5 inch XBL^2 drivers visually larger than the actual measurement. Not to mention the cool factor as my adult son pointed out on a recent visit. Between them sits the wellregarded RA104.5 ribbon tweeters. I haven’t experienced ribbons since the early 1980’s when I owned a pair of Infinity’s with the EMIT tweeter. The crossover is, in my opinion, the true heart of the HT2’s, with it’s matching of Sonicap capacitors, Sonicap Gen II by-pass capacitors, Solen Inductors, and Mills resistor, allow these monitors perform at such a high level. 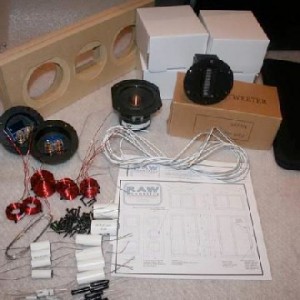 The first couple of weeks with the HT2’s were spent listening at a volume that brought new meaning to the term “low-level listening”. If the volume knob, let’s say had twenty positions, it never went above three. Call it apartment paranoia. But all was not lost; because I’m a believer that one of the best tests of a speaker is how well it performs at low levels. The HT2’s performed quite admirably with a richness that normally can’t be presented at such low output.

After a few weeks of very low volume listening in the apartment it became obvious that I needed to find a more private and larger area to let the HT2’s demonstrate what they really could do. An opportunity presented itself to have multiple listening sessions in a fairly large room, approximately 20 x 20 with 12-foot ceilings. In fairness, I should mention that this made it a unique review; so therefore, comparisons to other speakers auditioned previously are only discussed in passing.

Upon setting up the HT2’s with the Onix SP3 integrated tube, one thing became immediately apparent, the vocals are tuned over a half octave lower than my Totem MITES and Era Design 5’s. This difference took a bit of getting used to during my first session in the big room. However, once adjusted I was quite intrigued by the vocal presentation. Hearing an earthier James Taylor brought up images of him performing in bars at the beginning of his career.

Even though the drivers are just 4.5 inches and the cabinets are just 17inches tall, the HT2’s filled the high ceiling room without issue. The ribbon tweeter possessed smoother highs than I expected. The occasional harshness that I remember the EMIT’s producing didn’t exist. Had I not seen the speakers with the grills off I would have guessed a Seas silk dome based on the auditory performance.

During the second listening session I switch integrated’s, to my trusty Harman Kardon PM665vxi. This solid-state unit brought the vocal presentation up in frequency a good quarter octave. The deep tones were brightened and the overall effect was for lack of a better description, lighter. As much as I enjoy the SP3, it became apparent that the synergy between it and the HT2 is just too warm for my taste. In a larger room vertical and horizontal dispersion is a key quality. I checked vertical expansion by standing on a 30in stool. I found the HT2’s to be a solid performer. MTM design, some may argue limit the spreading of upper frequencies, but I found that thought to be without merit. Horizontal dispersion was a bit better, but with the room being so wide there were limits. The HT2’s did perform in a wide “V” but without close walls listening became a different experience. Not surprisingly a few dead spots existed. These points were very consistent leading me to believe the cause was the room rather than speaker-based.

Of all the music I listened to, classic jazz matched the speakers and room the best. The various work by Miles Davis and Thelonius Monk. Once again, the smoky nightclub illusion was eerily accurate. Most impressive was the instrument placement; each musician had a very defined space.

Since the HT2’s were designed with the goal of being able to perform in both 2 channel and home theater setups. With this in mind I decided it was only appropriate to test how well they reproduced dynamic movie moments. I fired up my favorite movie for this test, The Right Stuff. During the opening sequence when Chuck Yeager is breaking the sound barrier the sound track is exceptionally dynamic with an incredible frequency range. The reverberation audio trick used to recreate the effect as the plane filled the room. With the small drivers and dual port, there was no lag or delay.

Obviously, bass response is going to be limited, but the combination of the dual ports and warm lower midrange does give off a pleasant sense of decent bass response. A nice sub would definitely make for a powerful presentation with the additional bottom octave that the HT2’s just can’t produce. 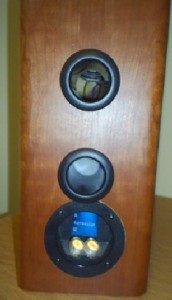 The RAW Acoustic HT2’s continue a trend that small speaker builders follow with absolute consistency; finest components at the price point, outstanding test measurements, and a strong sonic identity. The HT2’s are not for everybody, if you’re a fan of driving rock and roll RAW Acoustic has other models that would be a better fit. The dual XBL^2 drivers love to reproduce music that has a sense of space and a need for accuracy, definitely a match for the realism of classical jazz or chamber music. Not to mention the fun of home theater applications where the desire for accuracy in voices and sound placement are critical.

The HT2’s are a speaker that is very honest about equipment synergy, therefore, they truly are a speaker that needs to be auditioned in your own home. If the match works, you’ll enjoy the beauty of Al Wooley’s design for years to come.