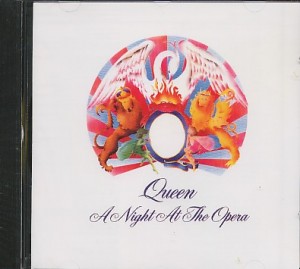 Few DVD-Audio releases can boast the level of hype and anticipation of that surrounding Queen’s ‘Night at the Opera’, due for release in April. DTS Entertainment have already delayed the launch numerous times from the original street date of November 20th 2001, putting the blame on various distribution issues, not least of which is the collapse of distributor Valley Entertainment.

At CES 2002 in Las Vegas however, each DTS press kit contained an advance copy of the disc, although it isn’t labelled as such, one of which is the subject of this preliminary review. The sample looks like the real thing; shrink-wrapped, a DTS seal covering the top of the Super Jewel case and both the disc and inlay card printing appears to be of production standards. For those interested, the stamp number on the disc itself is IFPI LL07 B01K2137 DC-1091.

The purpose of this piece is to provide an insight into what might appear on the final release for those who just cannot wait until April, but it’s important to remember that it is not based upon a commercially released sample and the contents could change prior to the official launch date. Whenever that might be.

For example, we know that Brian May, who it is claimed has overseen the DVD-Audio project since its inception, did not complete the six-channel surround mix until January 16th, which means that the 3/2.1 mix upon this disc is not the finished article…

Which is just as well, since it’s decidedly lacking in many regards. The surround mix itself has a dual personality, one moment conservative the next aggressive, switching partway through some songs as instruments move from distinct and at times distracting surround placement to more conventional positions. In fidelity terms, the DVD-Audio MLP track sounds decidedly rough around the edges, percussion is unstable (cymbal crashes have audible artefacts usually associated with lossy encoding) and there is a distinct lack of any meaningful dynamic range.

Just why the red-hot marketing machine of DTS should release such a sub-par effort to members of the press of all people, is anyone’s guess. It is hard to believe that either Brian May or Roy Thomas Baker would approve. Hopefully things will improve considerably when the final release version becomes available, so until that time I’ll reserve further judgement.

The sample disc contains three audio formats. There are two 3/2.1 mixes; one MLP on the DVD-Audio layer and the other DTS 96/24. To retain full DVD-Video compatibility, the disc also contains a two-channel mix presented as 96/24 linear PCM (which will be downsampled to 48kHz by the S/P-DIF output of most DVD-Video players) but does not offer any form of Dolby Digital track.

The inlay card continues DTS’ current theme of DVD-Audio misdirection. It states: “Each DVD-Audio disc from DTS Entertainment includes a DTS master quality multi-channel soundtrack and a standard stereo track for complete compatibility with all DVD-Video players, plus an MLP 5.1 soundtrack for DVD-Audio players.” The perception therefore, is that only the DTS track is ‘master quality’, where in fact only the MLP really is a true representation of the original master tapes.

The DTS track on the disc is the company’s newest extension format, DTS 96/24, a lossy but backward-compatible way of delivering 96kHz sampled data. In reality however, the entire audible portion of the frequency spectrum, 20Hz – 24kHz, is only delivered at 48kHz resolution and, to accommodate the inaudible data above 24kHz, at a bitrate lower than that of standard (full-rate) DTS. Once again, for reasons explained in the following paragraph, we’ll reserve judgement on the merits of DTS 96/24 until a later date.

The reason I wasn’t able to test DTS 96/24 in this preliminary review was that neither it nor the 96/24 PCM track would actually play on the hardware currently to hand. A Meridian 596 DVD-Video machine produced near full-scale digital noise into a Lexicon MC-12 on both tracks and even during the menu sequences, while a Pioneer DV-717 (another machine capable of outputting 96/24 PCM via S/P-DIF) refused to transmit any data whatsoever. Once again I have to question just why DTS would supply such obviously flawed and potentially damaging discs, regardless of their ‘advanced copy’ status.

As for extras, the advanced disc contains a video version of ‘Bohemian Rhapsody’, complete with a DTS 3/2.1 audio track, a set of ten small photographs and complete song lyrics (the frames advancing in synchronisation with the music) along with the story of DTS and appropriate production credits.

Many of the static disc menus appear to be overly compressed and artefacts are clearly visible around text and in areas of saturated red. Hopefully this is another area the will improve before the final release, especially as the artwork is visually attractive.

The basic disc layout and menu screens can be seen by clicking on the ‘Disc Captures’ link on the left of this page.

One last reminder – this is an advance look at a pre-production copy of ‘A Night at the Opera’, the content analysis upon this page reflects this version of the disc. Only when the final release becomes available will a complete review be published.

Queen-a night at the opera

1 thought on “Queen – ‘A Night at the Opera’ A DVD-Audio review by Stuart M. Robinson”