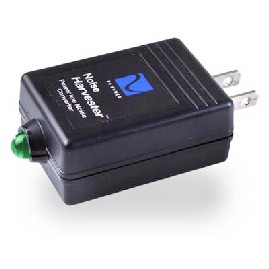 In early January I was asked by a reader if we could review some inexpensive noise suppressors. I immediately focused on PS Audio since they work with the good folks at AV123.com. I requested the “Noise Harvester” for a sample review. A few weeks later, a box of five appeared in my mailbox. Recognizing an opportunity to try something a bit different I mailed off four of them to my regular writers and saved one for my own use. Below is each writers experience in a short review.

Looking at the explanation on the site suggests that there is no “voodoo” science or snake-oil-sales going on here. I have a computer, a ceiling fan (that’s on 24-7), light dimmers and a television with digital satellite setup on the main floor of my house. My local utility is notorious for dirty AC. Some have suggested that effectively all it does is act as a simple filter, and it may very well be (if reported contents are true). I don’t know, nor do I care. In a rather non-scientific way, I tested it out using my own ”noise sniffer”, my ears. Here’s what I know:

Music was always enjoyable, and the listening experience was always enhanced. PRAT were left intact, while a quieter, darker background was apparent. A comment about any nay sayers out there. If it was easy, why didn’t they do it themselves, pay for UL and CSA testing and market them for themselves, enough said.

Eager to test the PS Audio Noise Harvester, I plugged it into my PS Audio UPC-200 power conditioner as soon as it arrived and the harvester didn’t blink at all. That’s when I begin to grow skeptical about whether it actually works. I also thought I received a non-working unit. But as soon as I flipped on the room light, the harvester starts blinking like somebody just slapped its momma. My light switch is a dimmer, and they are notorious for introducing noise into electrical lines.

I pop in my standard reference CD and lo & behold the damn thing works. The differences are very subtle, of course (I only have one of them), but perceptible within the first few seconds of the first song I played. The sound is a tad bit cleaner with a hint more detail. It’s a keeper, even for the peace of mind of knowing that some of my electrical noise is
being filtered and not getting into my music.

I will say, however, I doubt you’ll notice much of a difference, if any, on less than stellar recordings. It’s a good tweak, though, for the critical listener. I would imagine multiple harvesters on the same line are needed to realize a more significant and cumulative effect.

I’ve always thought my 2-channel system’s power was some of the cleanest, quietest I’ve ever heard. My house was built in 1947, so none of the original rooms have grounded plugs… it’s two-prong everywhere you look.

This isn’t great for having a lot of options to choose from when selecting gear (unless you like powering everything through cheater plugs), but it’s great for noise, as the ground wire is a typical way for EMI and RFI to enter a sound system. I have a few lights on dimmer switches in the room, but I tend to leave them off during critical listening sessions because they’re quite noisy. They don’t produce any sound through my speakers, but they make a subtle but irritating buzz all by themselves. 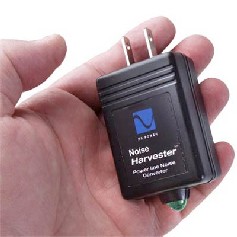 After my experience with the PS Audio Noise Harvester, I’m happy to say my early assumptions were correct. PS Audio claims that the Noise Harvester turns noise into light…when I plugged the unit in to an outlet on the same circuit as my sound system (and there isn’t much on that circuit besides my system), nothing happened. It didn’t even light up.

Now, when I turned on just one of the dimmer switches, the Harvester’s light came on. The lower the dimmer, the brighter and faster the Harvester blinked (the more noise was being “harvested”). The dimmers are on a different circuit than my audio system, but clearly they radiate RFI into my (almost dedicated) audio power circuit. However, since the dimmers don’t create any audible noise in my system, the Harvester didn’t make any audible improvement. This is likely because my amplifier has enough power regulation and filtration built in to deal with any noise coming from my dimmers. This is one thing that companies who sell power conditioners to audiophiles seldom mention… all audio components already include a certain degree of protection from RFI, in fact they are required by the FCC to do so. It isn’t sufficient for every system in every situation, but I’m grateful that it is in mine. The Noise Harvester in my possession is a review sample, but had I purchased it for $100, I’d be equally grateful for PS Audio’s liberal return policy, because that’s exactly where it would go.

I had the opportunity to review the Noise Harvester in two different environments, my home which I sold in mid February, and the apartment where my wife and I are temporarily camped. I plugged the Noise Harvester into the socket above the strip bar that handles all of my rig’s power cords. With my rig turned off, the blue light blinked slowly, picking up noise from other items on that circuit. When the little freezer’s compressor kicked on the blinking increased dramatically. Just to have fun, I decided to vacuum, instant spasms of intense flashings. The Harvester does recognize the polluting of current from other sources. This same result happened with even faster blinking at the apartment.

On other occasions I tried to audibly hear to difference both with the volume turned up minus music, and with music playing. In both situations I could detect a subtle difference, but as most tweeks go, it is nuances that are improved. I would consider the PS Audio Noise Harvester to be a worthy first step for those interested in exploring the role of sonic improvement.

I placed the PS Audio Noise Harvester on an electrical outlet in my listening room. It took a few minutes, but the unit began to light up periodically as it worked to eliminate noise on the electrical circuit. I chose to hook up a couple of high demand electrical appliances in the room to see what the effect would be on the Harvester. The frequency of the blinking pattern increased quite significantly. When the appliances were turned off, eventually the Noise Harvester’s blinking pattern returned to its former pattern. From a visual standpoint it appeared that the PS Audio unit was doing it’s job of scavenging electrical noise from the circuit that the stereo system resides on.

Since I have a couple of power conditioners in the house at the moment, I decided to try the Harvester on one of the outlets of the conditioners. When I installed the Noise Harvester on the first conditioner, there was no appreciable change in its blinking pattern. This would indicate that whatever type of electrical grunge that this unit is designed to eliminate can still be found on the output of a traditionally designed power conditioner. I then installed it on the output of the Monarchy Audio AC Regenerator. At the lower voltage settings there was no indication that the PS Audio piece could find any electrical noise to eliminate. However, when I bumped the AC Regenerator up to a 400-hertz setting, the Audio Harvester went nuts. It stated to blink furiously. At this pace, I half wondered if the unit would burn out. This experiment would indicate that a regenerated electrical signal is bereft of the type of electrical noise that the Audio Harvester extracts.

My listening sessions showed only a subtle change in the overall performance of my current system when the Audio Harvester is installed. The system took on a leaner presentation, with the upper midrange area taking on a noticeable emphasis. Higher frequency information also appeared to be a tad cleaner sounding. My listening experiences show that the Audio Harvester does affect the audible performance of my stereo system, although the effect is not an earth shaking revelation. While I had a small amount of these units to apply, I would suspect that increasing the number of Audio Harvesters would have a compounding effect on the overall sound.