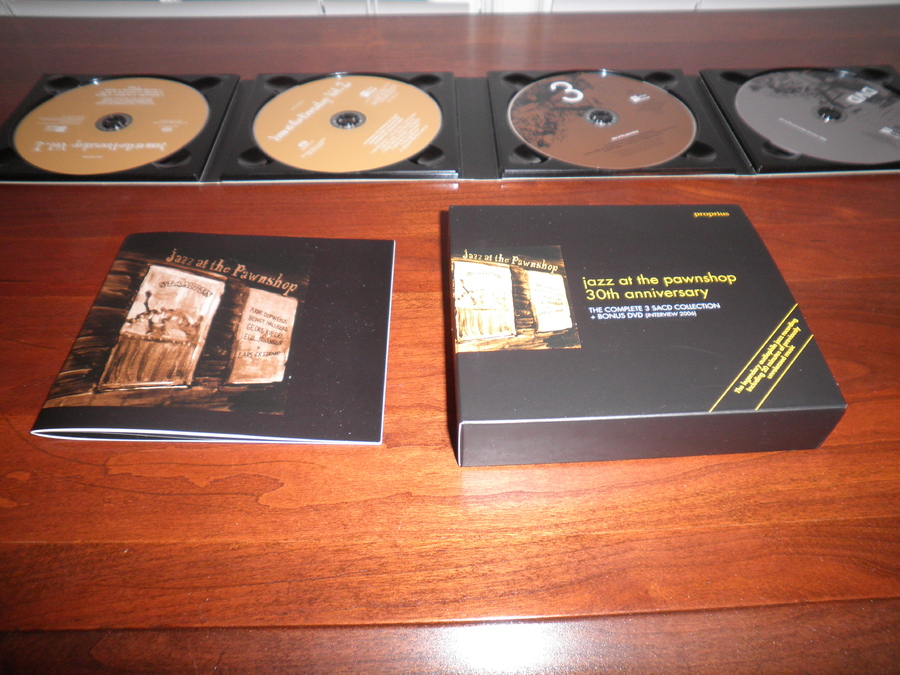 Proprius Music is celebrating the 30th Anniversary of Jazz at the Pawnshop with a Special Super Audio CD edition. Jazz at the Pawnshop is one of the most famous audiophile jazz recordings made. Over the years, it has appeared in a variety of formats including Vinyl LP, Cassette, CD, HRCD, XRCD, Gold CD and SACD.

The 30th Anniversary Edition SACD Set
For the 30th anniversary edition, which we are told is limited to 3,000 copies, Proprius is issuing a boxed set which includes three Hybrid Multichannel SACDs and a bonus DVD Video disc.

The three Hybrid Multichannel SACDs include the music from the two Priorius SACD editions of the Jazz at the Pawnshop albums as well as 20 minutes of what the record company calls “previously unreleased music” from this session. The bonus DVD Video disc has a 2006 interview with the participants in the historic recording session. Also included in the set is a catalog which lists all of the Proprius Jazz, Classical and SACD releases, a 23 page booklet about the album and the 30th Anniversary Special Edition and a numbered certificate that shows the buyer owns one of the 3,000 limited edition sets.

“Jazz at the Pawnshop is one of the most famous audiophile records in music. These sessions recorded at the jazz club Stampen (Pawnshop) in Stockholm in 1976 by Gert Palmcrantz has an extraordinary presence and a genuine live feeling.”

This album has been regarded as “The Best Jazz Recording of the Century”! Most audiophiles all over the world should have already be in possession of one. Its musical artistry and sonic excellence have few peers. With the blessing of the latest mastering technology and replication in Super Audio CD format, this recording has come out in its unprecedented musical glory!”

In the liner notes, album producer Jacob Boethius says “When recording engineer Gert Palmcrantz was loading his car with equipment outside Europa Film Studios in Stockholm, Sweden on December 6th, 1976, it was only to make one of many recordings. No one really knew then that this was to become a cult recording among audiophiles and one of the most famous and respected jazz recordings ever made.

The mere fact that a single jazz recording has been released in so many formats over a very long period of time (30 years) tells us that this recording must really be unique. The two recording nights at the Pawnshop jazz club were exceptional, indeed. The crowd lifted the musicians to the peak of their abilities and I sat together with two Nagra recorders and engineer Gert Palmcrantz in the small bar kitchen and listened to the result of a microphone set up of a life time, surrounded by five musicians playing in some kind of trance. Total sales of the recording now exceeds 500,000 copies, a tremendously good sales figure for classic jazz. And the records still sell at the rate of 3,000 – 4,000 copies per year today, some 30 years after release.”

Availability
The 30th Anniversary Edition of Jazz at the Pawnshop is available from several web sites that sell audiophile music including Acoustic Sounds, Elusive Disc and Music Direct. The set carries a list price of $89.98.