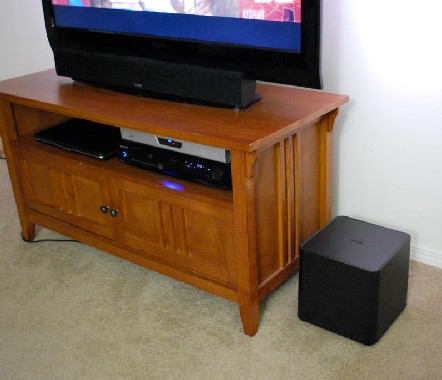 As much as I have always loved a home theater, it is significantly more work and more equipment than I want to deal with at times. For a long time however, the only options available to a consumer were piecing together a quality home theater from a company like Polk Audio, or buying a “home theater in a box”; which has never been the first choice of audiophile for many reasons. In the last few years, Polk Audio has pioneered another option for the sound enthusiast in the form of the SurroundBar. Their first offering was the original SurroundBar which consisted of seven 3.5″ composite cone drivers with three 0.75-inch silk/polymer composite dome tweeters packed into 42″ of simulated surround sound goodness. Since then, Polk Audio has released three more varieties of SurroundBars including the IHT (Instant Home Theater). Down sized a little from the original model, the stereo IHT has one 2.5″ Composite Midrange, one 2.5″ Composite Dimensional Bass Driver, and one 0.5″ Silk Dome Tweeter per channel. Couple this with the wireless 6.5″ Dynamic Balance long throw subwoofer, and you have the makings of a one of a kind home theater experience. Polk seems to have created a successful new piece of the home theater market.

“SDA Surround Technology makes the speakers disappear by canceling the acoustic position location information. That information is then replaced by the correct surround sound information of the original recording just as if sounds were actually coming from all around you.”

Polk couples SDA technology with their proprietary DSP programming to create Polk Digital Logic for a new level of realism and impact that has not been previously available in a SurroundBar. I have enjoyed the realism that SDA technology brings in a few pairs of Polk’s classic loudspeakers, but SDAs integration into the IHT was a new and enjoyable experience in itself for me.

When I first opened the box of the Polk Instant Home Theater, my eyes were met with a finely packed assortment of black plastic and white styrofoam. Pulling apart the layers, I was glad to see that everything I would need to setup the unit was included in the box; even if I was not going to use the included stereo RCA cables, it was refreshing to know that at least they were included since most consumers would not already be supplying their favorite flavor of interconnects. When I finally got all the parts out of the box, I was very impressed by how slim the SurroundBar piece of the IHT was; as well as its clean, flat black styling. As I set it under my TV, I realized just how well the IHT blended into my entertainment stand and TV. 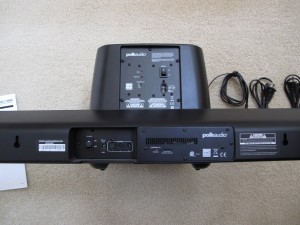 When it came to hooking up the Instant Home Theater, the name of the product could not be closer to the truth. I routed the power cord of the SurroundBar into my power center and plugged it in. I then connected the stereo interconnects from my TV to the unit with ease. The next part was by far my favorite, as I hook-up the subwoofer by simply placing next to my couch and plugging it in. Yes, you heard right. The subwoofer works by using a wireless four channel system. The back of the SurroundBar and the subwoofer both have an identical four position slider switch that you match between the two units. As long as the sliders are both on the same channel, all you need to do is plug in the subwoofer to any outlet and you have sound! The two units automatically sync audio signals, as well as both units will go into standby mode if they do not receive a signal for a few minutes. This is very useful if you want to stash the subwoofer somewhere in the room and not have to worry about powering it on and off, but a little frustrating if you pause what you are watching for a few minutes. Since the SurroundBar takes about five seconds to wake up after going to sleep, if you don’t take this into account by manually waking up the unit before you un-pause your television, you will miss a few seconds of your program or movie. 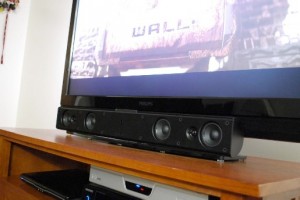 The other fantastic feature that Polk built into the IHT is the use of remote control learning. When I opened the box and unpacked the parts and contents, I realized that the IHT did not come with a remote control. Thinking that this might be an error, I quickly flipped through the manual, and to my surprise, no remote was listed as included in the box. However, upon further reading in the more than helpful manual, I figured out why Polk did not include a remote control in our “all to many remote control” world. The Polk IHT learns the controls and signals of your current remote control; not the other way around. And the programming for the SurroundBar is just as easy as it is to hookup! All you have to do is press and hold the Remote button until the indicator light starts blinking orange, than press the desired command button that you want learned on the Instant Home Theater. Follow that by pressing the corresponding button on your remote control multiple times until the indicator light blinks green, and your done! It really is as easy as that to program your remote, and it took me only about a minute and a half to program all the commands on my Harmony One. Maybe Polk should have called it the Easy As Pie Home Theater.

The Sound of IHT

It took me a little bit to get used to the sound of the Instant Home Theater as I was used to either listening to TV speakers, or a full-fledged home theater. Polk’s IHT was definitely in between the two options in the best way possible as I would describe its sound as subtle. After letting the IHT run for a little while and break-in the drivers, I sat down to watch a few of my favorite TV programs; mostly documentaries and comedy type shows. Immediately, I was struck by the realism and presence of human voices. Both male and female voices are projected incredibly natural and lifelike. While watching Mythbusters on the Discovery Channel, the sound was good, and far better than my stock TV speakers, but it was the natural tone and body of Adam and Jamie’s voices that kept me listening. I know it’s a cliché, but “I felt like they were coming out of the TV!” 1 The other obvious benefit of the IHT while watching Mythbusters was the bottom end reinforcement added by the subwoofer to explosions. I know that the wireless 6.5″ subwoofer does not have the house shaking, chest punching impact of a larger diameter driver backed by a larger wattage amplifier, but the bass frequencies were present and not over extended. They were subtle, yet provide a full range listening experience. When I was watching TV with the IHT, the sound quality and frequency coverage was increased ten-fold over the stock speakers on my Philips television.

Besides just the sound quality of the IHT, I heard another great aspect of the unit while viewing the great Blu-Ray Walle. This movie provides a plethora of noises, voices, and great sound effects; both organic and inorganic. The sound produced by the IHT was crisp, and with its SDA technology, also very pointed and direct. Let me state that the SDA effect produced by the Instant Home Theater is nowhere near the effect produced by Polk’s classic Stereo Dimensional Array line of full range speakers. However, incorporated into their IHT, it provides a little more realism, sound direction, and weight to the sounds and characters in the movie than similar products without it. SDA is a great technology that I’m glad Polk Audio has starting using it again in their theater applications as it adds a fullness and realism not heard anywhere else.

Since I had an iLive IT188B Bar Speaker hooked-up in place where the Polk Audio IHT now sits, I figured a comparison at this point would be appropriate between the two products. The first point of comparison is price and the manufacture. The iLive IT188B has an MSRP of $99 but can be had for up to $30 less than that depending on retailer. The Polk Audio Instant Home Theater has an MSRP of $499, but can be purchased for up to $50 less than that. That is quiet a price difference, but sometimes in this world you do get what you pay for. I have no comment of iLives customer service as I have never used them, but I have greatly enjoyed my interactions with Polk Audio Customer Service a few times and they are the best in the business. As far as the sound comparison, it is equal to their price comparison. The iLive IT188B sounds better than TV speakers, but the IHT is the best powered soundbar I’ve heard to date. The combination of Polk’s driver and SDA technology creates a product that is second to none in its class. 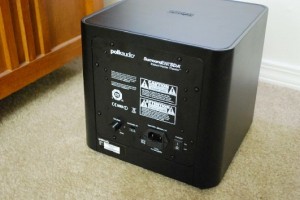 The Polk Instant Home Theater is a great product for someone who wants to improve their TV and movie watching experience. Being that it is a self powered unit, it’s very easy to set up, very simple to use, and is a complete 2.1 system. With an MSRP of $499.95, it may be a little expensive for the average user who just wants to add some sound reinforcement, but for that price you get great sound quality with a level of audio realism that is unmatched by any similar products.