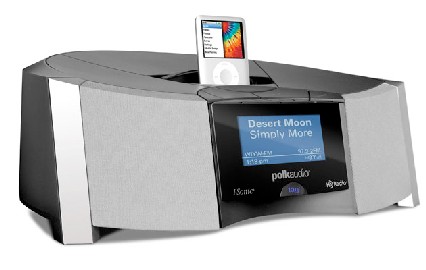 The beauty about audio is that every few years a technological wave comes thru bringing forth a new level of enjoyment to our hobby; most of the time it begins at the top of the equipment spectrum and works it way down to the rest of us affectionados. But every once in a while, a product comes along that takes a piece of forgotten technology and gives it new life in a form not thought of previously, or in the case of the Polk Audio I-Sonic ES2, takes a recently revived category to a whole new level.

Over the past few years I’ve had the opportunity to hear the re-kindled category of tabletop radios by Tivoli, Cambridge Soundworks, and Bose. All three had definitely improved on the listening experience, but at the same time, but they all still couldn’t reach the sonic level that many retail establishments/offices rely on. No matter how fancy the engineering, filling a room with a wide enough frequency response to make the experience noticeable was just beyond reach. Then, in 2006 Matthew Polk took a stab at the category. Unlike the others, he had an ace up his sleeve, the years of research and patents behind his unique SDA speakers from the 1980’s. Armed with this toolbox and DSP (digital sound processor chip), Polk went to work on taking the tabletop radio to a new level. In 2006, they released the I-Sonic ES to quite favorable reviews. The second model came in late 2007, the I-Sonic ES2 with its built-in iPod dock, and second generation HD radio tuner.

The I-Sonic ES2 is a half-circle shaped case of black plastic, with silver trim and speaker “grills”. The front top sits slightly lower than the back, giving a lower sleeker profile. The iPod dock sits under a flip-back lid. Polk provides several cradles to fit any iPod except Shuffles. Mimicking the overall shape is the control panel just in front of the dock. Every control button needed is provided. In a wise ergonomic touch, the button groups are different sizes, making for simple selecting/programming. The blue LCD display is easy on the eyes and big enough to beseen, yet unobtrusive enough to be used in a bedroom. The front grills can be removed allowing for access to the speaker drivers. 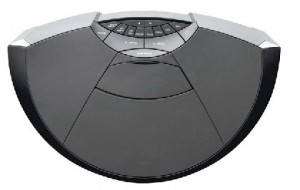 The backside gives the first indication of some advanced acoustical technology as a second set of speakers can be found. A centered jack panel provides connections for AM and 75 Ohm FM connection, RCA input and output jacks, composite and S-Video out jacks for 5th generation and beyond iPods. Finally, a covered USB port labeled “Service”. Owners can hope that thru a firmware update via a computer that in the future will allow an external hard drive to be connected.

In order to create a realistic bass response, the designers at Polk Audio managed to add in a mini version of their patented Power Port Bass design on the bottom right side. For those unfamiliar, picture a funnel with the pointed end placed into the port. According to Polk, this dissipates standing waves that cause bass distortion.

However, the real star of the I-Sonic ES2 is the Digital Sound Processor chip. Polk Audio engineers have programmed the chip to give off the proper bass and treble at each volume level. This balancing of the audio signal is a necessary part of dealing with creating quality sound.

Remember, the I-Sonic is not supposed to replace a two-channel rig. It’s designed to provide a pleasant musical experience where one couldn’t previously enjoy such an experience. The second role of the DSP, is the distortion reduction capability using a form of dynamic compression at higher volume levels. Finally, the DSP controls the time delay feature that allows for the four speakers to work in tandem.

About 75 percent of my listening was done using my 60 gig iPod, with all the music ripped in Apple Lossless format. Immediately, I was stunned by the level of bass response. Mark Knopfler’s “El Macho” from Sailing to Philadelphia was to the point of being too bass heavy. I pulled my 28 year old solid oak stereo cabinet another six inches out from the back wall to tighten the bottom frequencies. The vocal reproduction was outstanding; Polk engineers hit the tone level just right. It’s natural, full, and wide enough in frequency that the unique vocal characteristics of Knopfler and Sarah McLaughlin for instance, exude secondary sibilance that one would not expect to hear out of such a case.

The surprises continued to mount as I listened to the ES2. “Maybe I Think Too Much” from Paul Simon’s Hearts and Bones album does a nice job of allowing the steel drums the opportunity to actually have a space in its reproduction of a soundstage. The string squeaks of James Taylor’s guitar from “Up on a Roof” could even be heard. The ability to reproduce such background sounds has always been a personal sign to me of the quality of equipment.

Classical recordings I assumed would show the overt weakness of the Polk Audio ES2. Full symphonies are just too complex for such devices. I was wrong; the ES2 does solid work in presenting the material, especially with the larger string instruments. Yes, the soundstage is a bit compressed, but one isn’t listening to Harbeth’s. I revert once again to the word pleasant, the sound reproduction is engaging.

I had never really experienced HD radio before, and needless to say the ES2 impressed me enough to say that I’d be quite happy listening to the radio again just as soon as my favorite station here in Portland, Oregon gets inspired to broadcast in the format. I was truly floored by the sonic improvement. It’s that good; I compare it to going from a cassette Walkman to the compact disc version.

As an alarm radio, I enjoyed waking up from naps to the music of George Winston. Programming the system wasn’t hard as Polk includes a very clear and nicely laid out manual. If you’re into “iTagging”, you’ll be right at home with the ES2 as it supports this effort to eventually steer consumers to the iTunes Store. If it helps with the legal efforts to buy more music, I’m all for it. 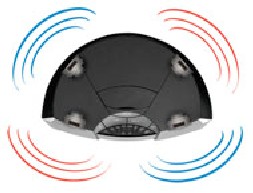 The Polk Audio I-Sonic ES2, isn’t going to make one sell off their two channel system. High frequencies are a bit veiled as to avoid distortion; therefore don’t expect to hear the breathy frequencies of a flute or the ringing decay of cymbals. The soundstage isn’t wide by any measure, but it is clear and with the time delay capabilities of the DSP, the illusion is created. I do wish their was a separate button for HD Radio instead of having to press the SEEK button in a certain fashion. Also, it would have been nice to have the specific knobs for bass and treble control like the original big brother I-Sonic, instead of having to use the various buttons. Finally, I do need to mention a plastic odor that never fully dissipated during my review time when I was using the controls.

If I was the parent of a collegeage freshman I wouldn’t hesitate to suggest the Polk Audio I-Sonic ES2. The capability to enjoy quality sound reproduction including bass response that young people desire, from an iPod, or directly from their computer; not to mention having the alarm clock and video out (class lectures, etc.), is terrific. The amount of space saving both in the room and traveling back and forth each year makes the ES2 a near no-brainer. 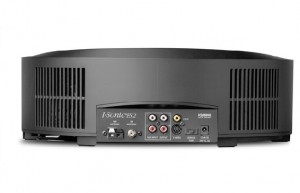 For those in an office environment without space for separate speakers, the ability of the ES2 to work in small spaces with hi fidelity results makes for a winning combination. Why bother with paying to setup ceiling speakers, just find a shelf, plug in the ES2 and walk away, the remote will control every feature, no need to worry about easy access.

I can even see the ES2 replacing boom boxes during family vacations. No, it doesn’t work on batteries, but for a cabin rental, or the RV, this unit makes perfect sense. I like the ES2 so much that there is a very good chance that it won’t be going back to Baltimore, instead its final destination looks to be my wife’s home office. The king of table radios still has four letters to its family name, but it now spells POLK!