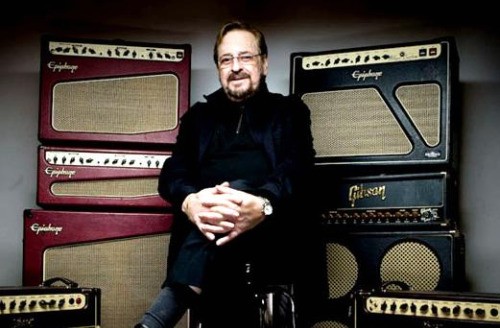 Al Schmitt introduced Surround Professional 2003’s keynote speaker, Phil Ramone, saying that usually he was irreverent when he spoke of Phil but this time he wanted to be serious. Al said that he and Phil are great friends and that it was a great pleasure and an honour to introduce Phil – in fact they are such good friends that they even went on a cruise together. After some laughter from the audience, Al added that Phil wore the high heels – so much for keeping it serious!

Phil Ramone: Phil said that he and Al had always teased each other about what they do. Phil said that he was really enjoying the Surround 2003 event and in particular the awards show the previous evening commenting that he thought Steve Vai deserved an Oscar for his speech in honour of Frank Zappa. Phil added that when he was asked to do the keynote he was a little surprised that it was so close to the end of the event: “So what’s this, the endnote?” asked Phil. Al piped up from the audience: “It’s the outhouse note!”

Phil assured is he would be brief. Usually when he stood at a podium, it was a little controversial, due to the career he had had. So he would keep his address short and then invite questions from the audience. The main thrust of Phil’s comments was the passion that everyone at the event had demonstrated for surround music: BT in his keynote, Bobby Owsinski in the discussions he had led and everyone else Phil had met or heard speak. He reminisced that he was first introduced to surround sound by Cinerama [the 1952 movie, ‘This is Cinerama’] – adding in jest that he was only 5 when Al took him to the theater to see it – shown on a three projector system, in “full surround”, with the opening sequence being film of the Cyclone at Coney Island – as soon as the music came up Phil remembers thinking to himself, “this is it, this is the future”. In the early 60’s Phil had the opportunity to visit ToddAO, adding that he was “only the music mixer” on a project but it was for an event at the World’s Fair. From then on Phil was “suckered in” and wanted to be involved in surround. On that project they did every possible type of commercial playback that was available at the time but never accomplished what they did on 6-track film. Then came Quad, a great invention and a good way to see studios go broke, but it was the beginning. It was a good system, but just had limitations if you tried to make a record out of it!

Phil recounted that in 1980 or 1981 he spoke at a retail event during which he held up a CD and talked about how wonderful the format would be at which point the audience went dead. After his speech, several of the retailers asked him whether he seriously expected them to get rid of their 12” display systems to move over to CD displays, and who could afford one of those players anyway? A little later Phil managed to wrest an early, $1,700, CD player from Sony in Japan and took it to PLJ, a local New York rock station and played a piece of a Billy Joel CD on the air. The phones rang off the hook, word got round to other stations and Sony let Phil have a couple more players to do demos for them too. By 1983 everything had changed and it took less than 5 years for the 12” LP to disappear.

Phil added that one thing he shared with people like Al, George Massenburg, Elliot Scheiner, Frank Filipetti and others was that over the years their aim had been to share with people what they heard in the control room – that would be the greatest moment, because no matter what product they had made over the years, it had never quite been manufactured they way it sounded in the control room.

Phil was really proud that he was involved, with others, in what would be an educational tour – Microsoft had agreed to lend their bus equipped with a surround music system. The point of the tour was to help people catch up with the formats – some of the retails stores were not doing as good a job as they should be in demonstrating the surround music formats. The tour is designed to do something about that. Phil also described another project that he and other professionals from the Producers and Engineers Wing of the Recording Academy had been working on recently – a set of standards and a platform for the professional to understand how to approach mixing in multichannel. Phil expressed the hope that those working on remixing existing material in multichannel were able, besides baking the original master tapes, to find the original take sheets along with the original masters, because it is a major problem at the moment and really slows projects down.

Another theme that Phil touched on was changing the thinking of those still stuck in a two channel world – he is currently working on the score for a movie and when he originally suggested that it be mixed and presented in multichannel, he had been ignored. Now that he has finally heard the score before the mix is finished, he has decided to go ahead and mix it in 5.1 anyway. It is up to the professional to recommend the new formats and invite others to hear it. The 2003 Grammys were another good example – the technology was available to produce the show in multichannel so they went ahead and did it. No one did much PR about the multichannel presentation but the broadcast was successful nonetheless. [In fact we are told by Lisa Roy who handled the technical press side of the event that

“there was the most press ever on the technical side of how this show is engineered and produced… Billboard, Pro Sound News, Surround Pro, Audio Media, New York Post, USA Today, Mix Magazine, Home Theater, Music Connection, etc. to mention a few.”

Phil is hoping that for next year, the organisers make a multichannel play-back room available for the press which will help advance the surround music cause. Phil commented that it was also up to the professionals to help advance the standards – at one time cassettes were considered the standard, but we have moved on from that. Similarly the more people that are introduced to multichannel, the more people will want it.

The final sage comment from Phil was that no matter how much bandwidth there is available and how much capacity you have to fill with bits, at the end of the day it is all about the music.

Q: “Can you say more about the standards and practices that you alluded to?”

A: “Al and a whole group of engineers and musicians have been working on this. You would think it would be easy, but it wasn’t. We definitely do not agree with the ITU speaker placement for music. We believe that whatever the home system – theater in a box or something more sophisticated – it should have unified speakers. The whole point of the paper is to give the home user a better chance because we do not yet have any control of recommendations to them and how they should hear it. I am in favour of putting a calibration menu on a disc up front to allow users to select options which best match their rooms. Originally it was just going to be a one or two pager, now it’s a book.”

Q: “Is another way to thwart downloaded music to change the CD delivery standard to something that cannot be ripped and burned?”

A: “I was part of N2K in 1998 and 1999, to provide legal downloads, but it would take three or four hours to download just a few minutes and not very impressive. But there were a few standards which could still work – $1 a tune, an album for $10. I would like to take a group of engineers and musicians around to schools to explain a little about the creative process and about copyrights. It’s much better for people to hear this direct from the artist, for example Justin Timberlake – some re-education is necessary. When music programs were dropped from schools, kids lost respect for the creative process. And let’s not worry so much about quarterly earnings otherwise we are forced into ‘formula records’ at the expense of true creativity.”

Phil recounted that he had recently spoken to Road Stewart who is doing a promo tour of 12 TV shows: “It’s wonderful Phil, we are selling 400,000 records a week, but why is it so expensive?”. “Rod, when I record you in the south of France while the band is in New York, that costs money”.

Q: “With the film and TV DVD market being so successful, where do you see the future of the surround music market, now that film DVDs are down as low as $10 while music is more expensive?”

A: “It all comes down to quality, we are all willing to be pioneers and do this for little money, below scale, to get the record out at the same price and not increase the cost because you get 40 minutes or 60 minutes. I also feel that the length of some releases is too long, some of the 10 song albums we used to make were better and more selective. If now the audience gets just 2 decent songs out of 14, what’s the point? I would also like to see the visual aspect get better – the music on screen, the credits – so that you have some of the visual reaction you had with a 12” cardboard sleeve. Price control is critical.”

Q: “Will the paper address the issue of standardised (playback) levels?”

A: “Yes it will – we have to address this issue. Thank you very much!”