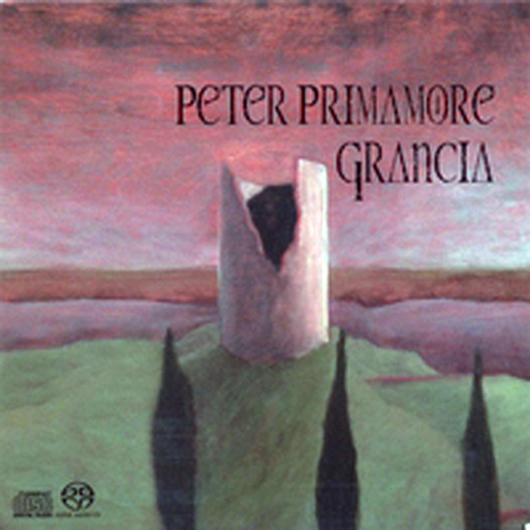 Blue Apples Music has released the debut album by composer Peter Primamore as a Surround Sound Super Audio CD. Primamore is best known as the composer of music for the Today Show and the TV Series Sex In The City as well as music for a number of TV shows and commercials.

Grancia is a Single Inventory Hybrid Layer Surround Sound Super Audio CD release. The SACD serves as both the Super Audio CD and CD Audio edition of the album. It is playable on SACD, CD and SACD compatible DVD Video players.

Assembling A Unique Group of Musicians
For the Grancia sessions, he lined up Larry Chernicoff, a winner of the Best Made for Surround Sound Title award at the 2004 Surround Music Awards to co-produce and perform. To that, he added 11 more musicians in a group that CD Baby describes as

Conceived With Surround Sound In Mind
According to Peter Primamore, Grancia was

“conceived as a surround sound recording right from the start. We recorded using an ‘artist’s perspective’ so the listener is essentially hearing the ensemble as I heard it sitting at the piano during the session. I wanted to create an organic music that would be, in some sense of the world ‘alive’. No synthesizers or samplers were used, and the ensemble was recorded live in the studio without a click track. Overdubs were kept to a minimum.”

“I honestly think we caught something on this one, starting with Peter’s compositions, a truly almost-completely-live recording (very few overdubs), and excellent sound capture. It was recorded in the same room as my SACD, October, with the same crew, but we all learned a little more about surround recording over the intervening 2 years, and sonically this SACD is even better. I think it outstrips most SACD’s that I’ve heard.

Though Peter Primamore is a very successful commercial composer (lots of TV work), I had never met him or even heard his name. He had kept his personal work, his own compositions, on the back burner for years. One day he heard a single track from my record (October) on the radio, and he got in touch immediately, feeling that I was one of the few people who could produce his music properly. I guess it had something to do with the approach we share to mixing ‘orchestral’ instrumentation with a jazz sensibility. Even so, our music compositions are very different – Peter has more groove to his stuff, but also writes incrediibly gorgeous chamber-like pieces. You’ll hear it.

We had a fantastic cast of players on the session, some of whom were shocked when I called and said that all the musicians were going to be in the studio at the same time. It’s unheard-of any more! As on my record, one requirement was finding classically-trained players who can also improvise. In the case of Grancia, that included a string quartet, harp, and the inimitable Charles Pillow and Tim Moran (the October wind section) playing every woodwind imaginable. Add to that Peter Gabriel’s rhythm section, Yo-Yo Ma’s percussionist, and guitar hero Chieli Minucci.

Anyway, it’s hard to compare Peter’s music to any one else’s that I know, although you may hear some analogies. It’s deep, but it rocks. As a composer, Peter is a master of tension and release, and when he decides to write a climax, he really writes a climax. It’s great stuff.”

Listening to Grancia in SACD Surround Sound
The word has been out about the Grancia Surround Sound Super Audio CD for some time. In fact, the first time I heard material from it was during the recent Audio Engineering Society (AES) Convention in San Francisco. There Dr. Andrew Demery from the Super Audio Center was playing some of the top new and upcoming SACD releases and Grancia was on his play list. (In this case, track 4 “Mill Walk” was one of Dr. Demery’s SACD sonic picks from the best of recent Super Audio CD releases). So I’ve been looking forward to a chance to pick up the SACD and give it a listen.

The music on the Grancia SACD has several different flavors including chamber music, world music as well as some jazz, western, brazilian and rock influences. In that regard, I think High Fidelity Review readers who enjoyed Larry Chernicoff’s October SACD (see link below) will find themselves very at home musically here.

I enjoyed the excellent use of the Surround Sound field on the album. It really pulls you in to the music and highlights the musical themes of Peter Primamore’s compositions. I’d also agree with those who have referred to Grancia’s 5.1 Surround Sound mix as being “cinematic”. It is indeed.

I’d also say that this is an SACD that cries out for listening to more than just the Stereo tracks on the disc. In terms of highlights, I’d second Dr. Demery’s selection of track 4 (Mill Walk) but I’d also highlight track 1 (Silver Stones), track 7 (Free Western) and track 8 (Windswept).

Production Credits
Grancia was produced by Larry Chernicoff and Peter Primamore, recorded by Paul Antonelli, mixed by Paul Antonelli and Rich Tozzoli and mastered by David Glasser at Airshow Mastering in Boulder, Colorado. The Hybrid Layer Surround Sound SACD was made by Sony DADC at their Hybrid SACD replication line in Terre Haute, Indiana.

Availability
Peter Priamore’s Grancia is available as a Hybrid Surround Sound SACD from the CD Baby web site for $15.98. It is also available from the Elusive Disc and Amazon.Com web sites. CD Baby also has sound clips of the album if you want to preview some of the music on the disc before ordering. 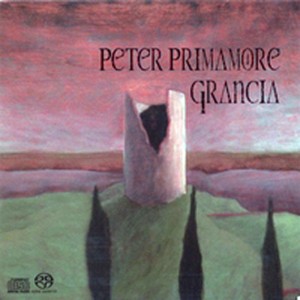