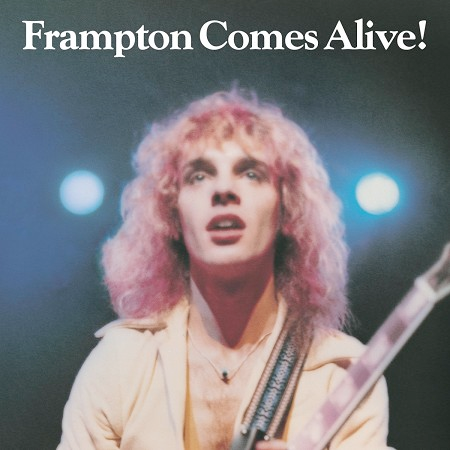 The tide of vinyl reissues continues, not only unabated but apparently gathering speed. This month, the recording at hand is one of Universal’s “Back to Black” series of classic rock reissues “celebrating” the 60th anniversary of the vinyl record. The sticker on the outside of this attractively packaged release promises “Premium audiophile pressing on heavyweight 180 gram vinyl in all original packaging!”. I’m not by nature a cynic, but my experiences with other labels’ promises of audiophile quality sound and weighty slabs of vinyl have been, well, inconsistent, ranging from the superlative to the frankly disappointing.

Everyone knows this 1976 album right? Well, if you were a teen in the seventies, it would have been difficult to miss. Like most, I remember a number of hits from the album (Show Me the Way, Baby I Love Your Way, Do You Feel Like We Do), a result of the incessant radio play that they received at the time. But to be honest, this is an album I never owned. It may be unfair, but I always viewed Peter Frampton as, well, kind of a chick-friendly rock star…that is, girls really liked him mainly because he was cute. Was there a 16 year old red-blooded male who would have put up his hand and said that he loved Baby, I Love Your Way? It’s a song that competes for twee-ness with similar soppy efforts like Paul McCartney’s  Silly Love Songs. Didn’t like ‘em then, don’t like‘em now.

Nonetheless, I relished the opportunity to hear what Universal has done with this seminal Frampton work, and broadly speaking I have not been disappointed. First the performance: A good live performance, featuring versions of a number of songs that work better in concert than in the studio. He’s a very talented guitarist, Frampton is, and on this album he does not overdo the talkbox, which can become annoying really quickly.

There are a number of real highlights, including, of course Show Me the Way and Do You Feel Like We Do, but also Penny For Your Thoughts, a short acoustic track that leads off side three. I’m also fond of Doobie Wah, which wins the award for the most dated spoken intro…a real taste of the mid-seventies. A cover of the Rolling Stones Jumping Jack Flash is interesting, but not exceptional. My favorite version of this song (aside from the Stones’ original) is Leon Russell’s cover from the Concert for Bangladesh album. There isn’t much patter between Frampton and the crowd on this album, thank goodness. And the audience does not intrude on most songs as they do on some live albums…there’s a bit of yelling and whistling on a couple of the softer numbers (and do I hear balloon popping at the beginning of Wind of Change?), but it isn’t overly off-putting.

Sound quality is very good for a live concert. The mastering of this issue is pretty sizzly, with the cymbals in the first track, Something’s Happening, certainly getting your intention. I am at a loss to tell you the source for this recording, whether original master tape, digital copy or what have you. Let it be said that it’s a decent sound throughout, neither as impressive as some reissues I’ve heard (Warner Brothers/Rhino series, for example) nor as unimpressive as some (“From the Capitol Vaults” series).

The vinyl, upon opening the LP, was shiny and unscratched. I can’t say that the two LPs were perfectly flat: They weren’t, but the warp was gentle and had no impact on the sound. There’s not much noise (beyond tape hiss) in the grooves, though there’s all sorts of (unwelcome) sonic excitement in the lead-out grooves at the end of each side.

This album is beautifully packaged, with a heavy, Japanese style (i.e. adhesive flap) outer jacket and the innersleeves of paper with plastic lining. The jacket’s art is pristine, and nicely printed on a matte-finish cardboard stock. Other reissue shops should take careful note.

And here’s the kicker: The price of entry for this reissue is just $23.00 if you look online. Given the prices being charged by labels for both newly and re-issued albums, this is a bargain, particularly considering this is a double album with well above average packaging. What’s more, the Universal website indicates that an enclosed certificate provides a code that enables you to download the digital tracks, in MP3 format, I imagine. (My copy sadly was missing this certificate, so I cannot comment in further detail.) According to the online inflation calculator, $23.00 today is the same as $6.20 in 1976. That tells me that the price has not increased, and may well have decreased, since original issue.

If you have even a passing appreciation for Peter Frampton, or if you remember liking a number of the songs from this album from back in the day, this LP is a hard one to justify passing up. It’s a feel-good album from a classic era. In his original review of Frampton Comes Alive in 1975, Rolling Stone critic Cameron Crowe noted that the album “…is much more than a souvenir. It is a testimony to Peter Frampton in his natural habitat.” That’s a fair comment.