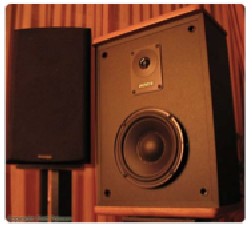 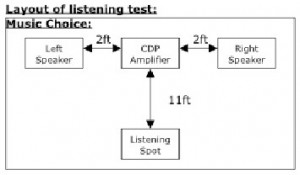 With everything set up, and my first track ready to play, I sat back on the couch and closed my eyes to block out anything that may distract me from using my hearing sense to its full capability. With the press of the play button on my DVD player I was ready to listen to what the Advents could do. Right off the bat, the Advents were warm and colorful, with loads of character. These are the types of speakers that you can listen too all day without fatigue. They were well balanced in the upper and lower registers, and the tweeter did a good job of pronouncing the strings of the guitar, and rasp of the trumpets in a few of the tracks. The sealed cabinet allowed the small 6.5” driver to travel fairly low in the frequency range, but not enough to provide a chest pounding impact like a larger driver would typically do. I also found that on some tracks the mid bass sounded a bit muffled as if I were listening to the speakers with a cover over top of them. Removing the grills on both didn’t help remedy the situation that much. Further listening of the Advents provided some really nice detail in the program material.

Sitting back with my eyes closed, these speakers really brought to life the wide variety of instruments used, from the plucking of the acoustic guitars to the trumpets in the jazz tracks, it all seemed very realistic. One of the downsides to the Advents was the lack of soundstage. While I found both the Advent and Paradigm to be lacking in this department, I more so found the Advent at times to be very precise where the vocals were coming from, and instead of being an open and airy soundstage, I felt you could too easily pinpoint exactly where the voice was coming from, which was somewhat of a disappointment.

Once the first round of listening was complete, I swapped out the Advents for the Paradigms, and placed them in the exact same location and wired them up. The first thing I noticed is these speakers were a fairly bit more sensitive, as I had the gain set a bit lower for the same desired output with the Advents. After listening to the first few tracks, I quickly noticed that the soundstage on these little monsters was a lot wider and more transparent than the Advents. While I sat back on my couch with my eyes closed, I could hear the different instruments being played in different spots, and the voice was more central, instead of coming directly from the speakers like it was with the advents. The highs were very smooth, and the blend from the lower and higher frequencies was very well done. Detail in the music was very pronounced and I could hear little things in the music I couldn’t pick out as well with the Advents. One downfall with the Paradigms that I heard was the bass output. In my opinion I didn’t find it as musical as the Advents. The ported cabinet could cause this, but I found that not as much detail was prevalent in the lower registers as it was with the Advents, although both speakers had solid bottom end for their respectable sizes.

After the listening test I was left with a good feeling that these speakers gave me. Being enveloped in the sound and for it to sound really lifelike is a nice quality to have in such a small speaker.

A rundown of both speakers revealed:

Cons: Bass can sound a little boomy at times.

Both are real winners in their own way. The cons weren’t great enough to make me put these speakers away, as I found a style of music each one was better at reproducing that the other. If you get a chance to try out a pair of either, I suggest you do so, and will not be disappointed in the performance these little contenders pack.

Custom 3ft interconnects with gold plated connectors No preamp was used in this test. The CDP was fed directly into the Samson Servo and the adjustable gain was used on the amp to eliminate any possibilities of coloring the sound, or adding any more qualities that might not be desirable for the test.