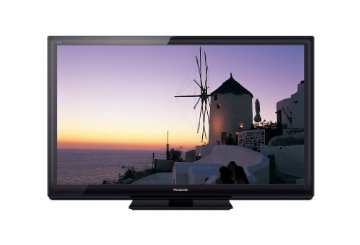 Today we’ve got another fine Panasonic on tap for you today, a massive beauty that goes by the name of the Panasonic Viera TC-P65ST30. Longtime readers may well already know what’s in store from the just from the name alone, but when you find out exactly what’s waiting, well…then you’ll likely be impressed.

The picture is as impressive as you’d expect a sixty five inch image in 1080p to be, and the sound is actually a step up from the ordinary with a surround sound decoder on what should have been purely mundane ten watt speakers. There’s plenty of support for new gear here, and the technology of the future besides. Sure, there’s not much room here for your older gear, but then again, you’ll likely want new gear to fully appreciate what this thing can do to begin with.

And of course, a massive piece of impressive hardware like this won’t come cheap–Amazon’s looking to get $2968 for one of these, which is no small price by any stretch. But then again, when you’re talking about a substantial piece like this, well, it only makes sense to talk about it with big numbers.

The Panasonic Viera TC-P65ST30 likely won’t disappoint by any stretch of the imagination, but it will take quite a pocketbook to get it into your home theater system.