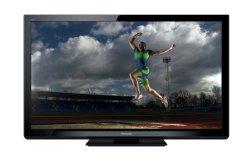 We’ve got another plasma television to take a look at today, folks, and it comes out to us from the folks at Panasonic, specifically, the Panasonic Viera TC-P42S30. It’s a reasonably impressive piece at a surprisingly good price, so let’s have a look at just what makes this one something to see.

The Panasonic Viera TC-P42S30 is a forty two inch 1080p plasma television that packs Viera Tools to help teach you just what your television can do, the Viera Image Viewer for showing pictures and video from the TC-P42S30′s included SD card slot, a game mode to improve images in your games, a six hundred Hz refresh rate to reduce blurring, Deep Color and x.v.Color technology for improved picture, wi-fi capability (you’ll need an adapter, though), two ten watt speakers with surround sound capability, three HDMI ports, one component input, one composite input, two USB ports and an Ethernet jack.

It’s actually pretty nice, this one–I liked the picture on this one, and the sound was fairly decent, though you can only get so much out of a pair of ten watt speakers. I’m a little dissatisfied with the relative lack of connections for older gear, but there’s plenty for the newer stuff, and this also handles streaming, which is a welcome change. This is one of those that errs on the side of streaming being the dominant media delivery system of the future and I can’t say I blame it.

In terms of value, you won’t do too badly here; the folks out at Amazon want an oddly specific $667.89 for one of these. All things considered I’d call that a fair price.

So if you’re in the market for a new television, want to go plasma and have a good net connection with plenty of bandwidth, I’d definitely suggest taking a closer look at the Panasonic Viera TC-P42S30