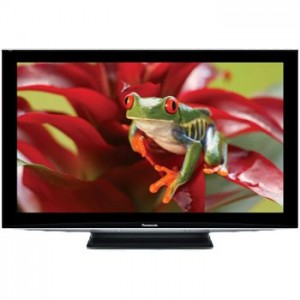 When I got a look at today’s review target I was downright blown away, folks.  Seriously, I haven’t seen the like of this in quite some time.  It may not be as big as some out there, or as expensive, but man…it’s a doozy.  Today we’re talking the Panasonic TC-P58V10, and it quite possibly will blow your mind open.

It’s not every day that a high-end television gives anything more than the finger to older components, but the TC-P58V10 will accommodate your older gear with composite and component ports.  You’ll also have the run of new hardware with plenty of HDMI and the home theater PC route is now open to you as well with a PC input.  The sheer capability and versatility of this system blows my mind.

But of course, you don’t get a system of this kind of quality without shelling out–and shelling out BIG TIME–for it.  This will set you back twenty five hundred bucks, but after getting a look at that picture and hearing that sound, even unaugmented by your audio gear, you might well be sufficiently amazed to scream “damn the budget!” RIGHT IN THE MIDDLE OF THE STORE.

At any rate, the Panasonic TC-P58V10 is an amazing television that will likely catch your interest.  The huge price tag, sadly, is just a cost of greatness.