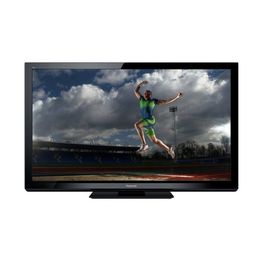 Panasonic, folks, has put out an unsettlingly large number of plasma systems under their Viera subbrand that have both amazed and infuriated me, and sometimes even both at the same time.  Today we tackle a new Viera plasma in the form of the Panasonic TC-P46C2, a plasma television with a big surprise.

This is one of those great entry-level plasmas for people who’ve been playing the waiting game possibly a bit too long or were waiting for their old television to kick off before upgrading.  This has plenty of inputs for older components, but also boasts some HDMI so that gradual expansions can take place.

No one will ever mistake this for top of the line.  720p is almost a joke when compared against the 3D magnificences we can get today.  Two ten watt speakers are better, but still not top of the line either.  But nor is the PRICE top of the line–you can lay hands on this puppy for six hundred sixty five bucks out at Best Buy.

So if you’ve been considering an upgrade, but the economy has left you a bit gunshy or your old television was still doing the job, you may want to consider your first upgrade to the fairly inexpensive Panasonic TC-P46C2.