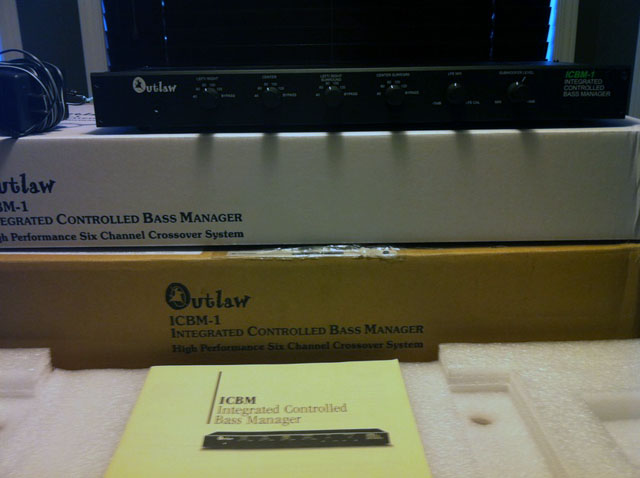 It seems like just yesterdIn my main surround setup, a core of consumer hardware feeds a pro-level Tannoy 5.1 system. As with many pro applications, high-performance consumer gear is an affordable alternative to the even higher stack of professional hardware necessary to handle multiple formats and media. Although the hardware situation is gradually changing for the better, there are no hard and fast rules as to where bass management will be implemented and with what degree of flexibility. For Dolby Digital and DTS encoded product, digital domain bass management in my Denon receiver works fine. I chose a Denon DVD-A/V player partly for its built-in bass management, but there was still the need to crossover my SACD players outputs. When I first added the Sony SACD player, a demo Genelec surround system was capably handling all the bass management chores at the end of the chain, but once the Genelec PowerPak system was returned, I needed an external bass manager to properly accommodate the SACD players analog outputs.

On the recommendation of a friend, I obtained an Outlaw Audio ICBM (Integrated Controlled Bass Manager), a unit specd with a feature set that solves my current problems while accommodating evolution in the rest of my system. Before I listened, I put the ICBM on the test bench where it performed well. The ICBM is ready for high bandwidth audio, with a frequency response down less than 0.3 dB at 100 kHz. At nominal input, THD+N is less than .002% with good IMD performance. Interchannel crosstalk is low, and dynamic range measured 118 dB with a test 20 kHz bandwidth and 113 dB with an 80 kHz test bandwidth.

The ICBM is a single-rack height processor with an external AC supply (read wall-wart). Inside is a single-ended power supply feeding TLO72 opamps in the filter sections and 5532s as drivers. Interface is via RCA phono jacks at Hi-Fi levels with 6.1 channels of throughput and a pair of subwoofer/LFE outputs.

Basic installation is obvious. Operation is equally simple, with a few sophisticated options. On the front panel, six-position rotary switches determine the roll-off point  low-frequency information is sent to the Sub/LFE outputs with roll-off selectable between 40, 60, 80, 100, and 120 Hz, or the crossover filters can be bypassed. There are four such switches (controlling front left and right, center channel, left and right surrounds, and center rear), allowing speakers with differing specs to be easily accommodated.
The LFE outputs can operate either in mono or in stereo, where the left front and surround channels are used to derive the left Sub/LFE feed along with half the low-frequency information coming from the center channels and LFE input. The right Sub/LFE output would be similarly handled. A front-panel pot allows you to trim the LFE level within the Sub/LFE mix. A second such control determines the overall Sub/LFE output gain from off to +9 dB gain. The high-pass crossovers within the ICBM are 2nd order (12 dB per octave) as are the low-pass crossovers, though the latter are switchable as a group to a 6th order (36 dB per octave) mode that Outlaw says better matches some subwoofers, particularly THX certified units.

Another significant feature is the Recombine circuitry. With Recombine switched on, the front left and right channels will be fed the Sub/LFE information derived from the crossovers. Where substantial front speakers are used and/or no subwoofer is available, the bass capabilities of the front monitors can thus be used to reproduce (or help reproduce, as the Sub/LFE outputs are still active) the low-end.

The Recombine circuitry seems the likely source of one measured performance difference between the channels designated for front left and right as compared to the rest of the inputs. Measurement showed a 6 dB headroom decrease in the front L/R, taking the input clip point down from 19.6 dBV to 13. 5 dBV. Depending on the scaling of the converters in the players connected to the ICBM, this shouldnt be an issue, and other parameters were unaffected. For my install, not needing the Recombine function and wanting the most headroom possible for my front channels, I used the I/O designated for the surround rears for the front left and right, and vice versa for the surround left and right channels.

Sonically, the Outlaw ICBM is neutral, and thats exactly what you want when adding an additional stage of circuitry in your monitor path. The design is clean, efficient, ergonomic and, best of all, flexible. The performance well exceeds the imminently reasonable $249 price tag. The Outlaw ICBM readily addressed my immediate bass management needs, and I anticipate using it in other configurations in the years to come. A worthy purchase.