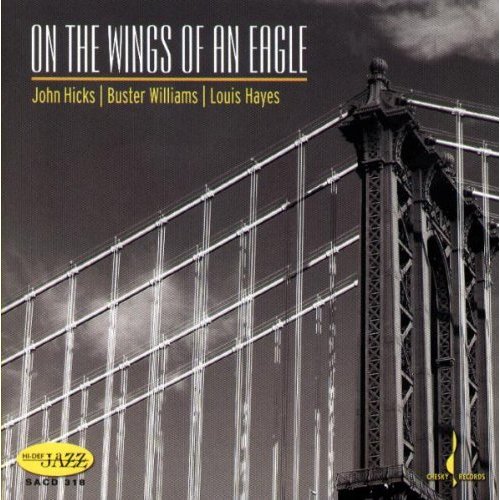 On The Wings Of An Eagle is the latest edition of Chesky’s New York Sessions SACD Jazz Series. It features John Hicks, Buster Williams and Louis Hayes in a live performance that now has special meaning with the recent passing of Hicks last May, just two months after this session.

In the SACD’s liner notes, Ira Gitler says that

“John Hicks performed with Buster Williams and Louis Hayes in a combination simply called “The Trio”. They gigged at clubs like the Jazz Standard and Sweet Rhythm. It is the group featured here on John’s last recording. Buster and Louis, each a leader in his own right – the former with Something More and the latter with the Cannonball Adderley Legacy Band – are more than sidemen. They are interactive parts of a strong but flexible triangle. They should open up the ears of first timers and warm the souls of veteran listeners.”

The album was produced by David Chesky and Charles Carlini, recorded, edited and mastered by Nicholas Prout with session coordination by Rick Eckerle and project coordination by Theodore Thimou, Lisa Herschfield and Nicholas Oddy. The Hybrid Surround Sound SACD was made by Sony DADC in Terre Haute, Indiana on their Hybrid SACD replication line.

On The Wings Of An Eagle finds this trio of veteran jazz musicians playing both upbeat material and ballads. Jazz fans will enjoy what can only be described as listening to some top flight players performing classic material. The Surround Sound Super Audio CD tracks present the trio in the front channels with only a hint of the church ambience in the surround channels. The sound is top notch and shows the ability of the SACD hi rez format to present quality music in its best light. For jazz fans this one is recommended for both its performances and sonics.

Chesky Adds A New Jazz Recording To Its SACD Release List
High Fidelity Review readers will recall that Chesky Records plans to bring out a Surround Sound Super Audio CD release of Rebecca Pidgeon’s album The Raven in April. This follows the successful Hybrid Stereo SACD edition of this album that was released some time ago by the label.

Chesky has announced that they will be releasing a new album entitled The Jobim Songbook by the David Hazeltine Trio. This is the trio’s second Surround Sound SACD from Chesky, following up the group’s Manhattan album (Chesky SACD 310) that was one of the first two of the Chesky New York Sessions SACDs released last September (see linked story below).