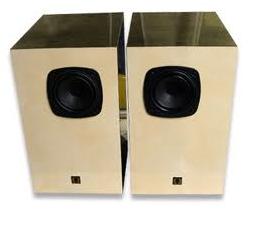 If Omega means the end, then the Super 3 XRS present some kind of final end game for fans of emotional sound-craft.

If Omega means the end, then the Super 3 XRS present some kind of final end game for fans of emotional sound-craft.

Louis Chochos is of the low-key, personable breed of speaker designers, a mellow mortal who lets his goods do the talking. And man, do they ever talk! Lou and his line of mostly single driver, bass ported, super high efficiency loudspeakers have received rave reviews from our friends in the audio press. A particular favorite of the SET crowd, Omega Speaker Systems are manufactured entirely in house by Lou and his mighty crew at Omega’s Norwalk, Connecticut facility. Lou has had great success with his small monitors, including the Super 3 Version 2, Minuet and Mini Me, TS33 and Super 3 Bipole speakers. However, his line lacked a real floorstander. Until now.

The Super 3 XRS is rather pint-sized compared to my tallish DeVore Super 8s, but is nonetheless closer to true floorstander designation than the rest of Lou’s line. It uses an Omega modified full range 4.5” Fostex paper cone driver with rubber impregnated surround and alloy chassis (2.9 grams) coupled to a 2” flared single port (made by Precision Sound Products of Chicago), placed close to the bottom of the cabinet for maximum impact. The cabinet is composed of varied widths of ultralight MDF, Baltic Birch, and Phenolic. There is no crossover here to muddy the signal or create other nasty problems, internal wiring is 16-gauge stranded copper, and stated frequency response is 40-18KHz with a gobsmackingly good sensitivity of 93dB at 8 ohms. Binding posts are by Bennick. This handsome mighty mite measures 27” H x 11”W x 7.5”D and weighs a back-friendly 30 lbs.

The finish on my review pair was a gorgeous Cherry wood (front and back) with Black Oak laminate (sides). Gorgeous? Yes – in fact, my girl-friend says she liked the finish even more than she enjoyed the sound.
“The Super 3 XRS incorporates custom Omega vibration damping techniques,” proclaims the Omega website, “that include: Omega re-bond dampening, a mass-loaded chamber, and a triple layer semi-floating baffle and back.” One item the site leaves out (or at least doesn’t mention) is crucial: sand. Lou loads a small chamber within the Omega Super 3 XRS with sand to dampen and drain the cabinet, and extend bass frequencies. It works. Really.

Fans of typical multi-driver, crossover enabled speaker designs may just wonder “what’s the big fuss about single driver speakers”? I know I did. “This speaker extends the bass of my Super 3 bookshelf speaker,” Lou explains, answering my question without answering it. “The Super 3 is exactly the same as the XRS but in a bookshelf configuration. The Super 3 always had good bottom and balance. But I wanted to extend the bass and create more weight. I listened to a bunch of different drivers made by Fostex and the SE 127E seemed to have the best balance and was the most extended.”

Well, Lou, for folks who are out of the loop regarding this whole single driver thing, what are its benefits? “A four and a half inch driver is really fast,” says he, “and it images well and really lets go of the notes. The wide baffle I use with the Super 3 XRS gives you really good imaging with the single driver. It might wreak havoc with multi-drivers. When you are doing multi-ways you have cones and domes and there are different radiation patterns. With the single driver, it is the same radiation pattern throughout, and also, what is nice about the XRS is that the baffle extends all the way down to the floor and that adds reinforcement and it makes them easier to place in the room.”

So I am learning something here. For sure. Another thing – what role does the large flared port play?

“The flared port allows more bass output and it is really quiet compared to some straight wall ports,” Lou responds. “It has more meat down at the bottom and there is no chuffing or port noise or whistling.”
Meat at the bottom? Whistling? Chuffing? Hey Lou, are we ogling babes at a bar?

“I knew I would get more bass out of the floorstander because I increased the [cabinet] volume,” Lou continued, ignoring me. “And the port helps to load the room ‘cause it is low on the rear [there he goes again], but when I first tried it out I was amazed at how much more bass there was. I wasn’t prepared when I built the prototype to hear that much bass. And you don’t have to put them in the corners or particularly close the wall. You can go out three feet from the wall and still hear good bass.”

Bass me timbers! Call out the hounds!

And that is as good a place as anywhere to report on the sound of what I consider to be miraculous little speakers. Lou showed up at my door to set-up the Super 3 XRS but it wasn’t really necessary. Sure, he fooled around with the rake or tilt of the cabinets using small Isol-Pads under their bases to aim them at the supposed sweet spot. Heck, I could have done that. But I guess Lou wanted to see my room, see what his speakers were in for, as it were. Lou didn’t do much: he set them up, plugged in the Auditorium 23 speaker cables and sat back and shut his yap. But I didn’t. I don’t like to be so effusive right off the mark, but the Omegas simply floored me.

Remember TV sets in the 50s? Okay, I was only two but my mom’s black and white Polaroids show that they looked kind of portly and had a big eye. Just like the Super 3 XRS. But those old Admirals didn’t have any bass. The Super 3 XRS produces the kind of meaty, acoustic bass-loving tonnage that I can truly get down with. Looking at their diminutive size it just doesn’t seem possible, but they had – can I say it – slam. Warmth. Decent extension. And even better tone. Of course, when I hit them with David Gray’s White Ladder they folded, the small Fostex drivers freaking at the first sign of subsonic synth bass. So don’t even try that.

But every other CD in the small group jazz, large jazz ensemble, punk rock trio, and rock and roll quintet formats became the sonic gift that just kept on giving. I didn’t have any worries in that department, and I report on that first because I really expected so little. Silly me.

For pure coherence, the Omegas were full and round sounding, and almost seamless top to bottom. Were they a little colored? You bet. These are not neutral speakers, they are emotional transporters. Is their soundstage perhaps not as statuesque as that of my almost four times as expensive DeVore Super 8s?

Certainly. And the small Fostex driver doesn’t reveal all the detail and depth of the DeVore tweeter. Nor does it present the same level of note decay and silkiness of the DeVore. But listening to all manner of music for days on end through the Omegas, I was constantly taken with their musicality, their exceptional, even liquid midrange presence, and their overall extension, which again, just knocked me out. Their signature sound is one of tremendous bloom, speed, and extension. They get a lot right, and not much wrong. $949 just shouldn’t buy this kind of listeningfun.

I played around with placement but heard little difference. Placing the Omegas closer to the wall than five feet or so (from my reference of six feet from the back wall) improved the bass but killed the soundstage.

Too far out and they sung like mad, but without that beefy bottom.

I could play the Omegas pretty loud, and they went for broke, only becoming cluttered sounding and argumentative when asked to play large scale symphonic pieces or Danny Elfman soundtracks. And though Lou suggested as he walked out the door that I try listening, “at really soft levels late at night,” I told him to keep on walking, pal. I played the Omegas loud at all times, day and night, and I liked it. I felt like I was getting all the weepiness, happiness, humor, and emotional turbulence that great music is supposed to deliver.

The $949 Omega Speaker Systems Super 3 XRS performed extremely well, right out of the box. I expected some kind of break-in but they presented a fully fleshed out, palpable presence from day one. They gave much pleasure, they did so many things right, that their negative qualities simply became softened and less noticeable. I predict that these speakers will soon become a hot topic on the freak fan audio boards, and as Lou envisions a future of flash cars and Euro trash travel, he will raise the XRS price to a more realistic $1500 or so. And they are certainly worth it. You could easily spend a lot more on a pair of single driver, super high efficiency speakers and come away with a lot less. If Omega means the end, then the Super 3 XRS present some kind of final end game for fans of emotional sound-craft.
– Ken Micallef

Power Requirement: as little as 2 watts