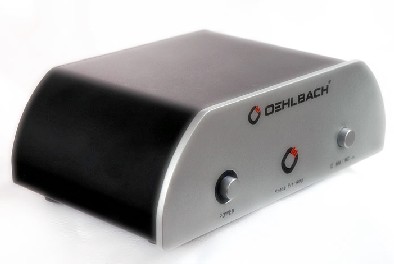 For the past six months I have not listened to music. By that, I don’t mean that I have lived in a world where music has not existed, but that I haven’t really had the time to sit down and seriously listen. Too many things have been going on, too many of my hours have been spent working, and what’s more, I just haven’t been in the mood. Which is a little strange perhaps, because music almost always helps my mood. But not this time, or maybe that should be these times.

Now, funnily enough, I have added discs to my collection over these quiet days. Many a new and pre-owned CD has found a home on my ever-expanding shelves, and I have changed the equipment I use for listening quite radically. I just haven’t used the on switch very often. Instead the relaxation button in my life has most certainly been turned off.

Why? Well, as I suggested, work has been taking too big a hold on my life, which is as it should be when you spend rather too much time perusing the online audio sites in your spare time. I mean you have to pay for all this music stuff somehow, even if it is affordable. We have also moved apartment, which is about as stressful an experience as I ever wish to go through in my life.

But now spring is here and things are changing. Apart from my wife deciding that our small balcony can provide us with enough herbs and plum tomatoes to turn us into Italians, which has led to numerous excursions to garden centres and Home Depot type stores, I have a little more time. She’s also intimating that we might move home again, and that our existence would be better with at least one dog. But that’s another story.

Back to music and its playback. I’m an old fashioned, flat earth, vinyl spinning kind of guy, and so I’ve often dreamt of adding valves, or as you say stateside tubes, to the system. I’d also long wanted to try a separate phono stage as opposed to the internal device in my solid state Micromega amp. You don’t know how lucky you are across the pond when it comes to inexpensive, US built and designed, tube electronics and the like. And as for phono stages for pin money, I envy you just enough to emigrate! However, there are some terrific bits and pieces available from Europe and beyond if you do a little research, and after some study I found two more than affordable, and quite intriguing, pieces of kit.

Let’s start with a phono amp that I thought might hit the spot. In the old days, of course, every integrated came with a phono input, but that was before the music died for LP, and long before it came back to life with a vengeance. Now you need an extra something, and the choice is growing by the hour. The hi-fi world is awash with inexpensive, moderately priced and down right bank account crushing boxes that amplify the tiny signal your cartridge transmits from an LP. You can buy solid state, battery powered, transformer based, or tubed equipment to do this vital job. The one I settled upon is, on the face of it, a simple, solid-state design.

I stumbled upon the Oehlbach XXL Phono Pre Amp while surfing the net in search of interesting, affordable equipment available in Vienna. It seemed to be gathering quite a following, and the company itself has gained many admirers, and an award or two, over the past thirty-two years with a small but select portfolio of products. These include ultra affordable high end interconnects, speaker cables, spikes and pucks, and I hope to try some of these in the future.

This unit is a small, beautifully curved black and silver metal box, with two pairs of RCA sockets, input and output, a ground connector and an external mains adaptor. It is suitable for MM (35 dB) and MC (60 dB). I use MM cartridges, but I don’t doubt that any MC of reasonable output would be quite happy plugged into the XXL. The pre-set loadings are 47 kΩ for MM and 100 Ω for MC, which seem to be the norm. There are two small buttons on the front, one to turn on the unit and the other to choose MM or MC. The power glows blue when on. And the XXL is reassuringly solid.

I first connected the Oehlbach to my Micromega Minium amp, which I’ve used to listen to vinyl for many years through its phono input. Using my Rega 25 and Roksan Corus, retipped by Expert Stylus, (highly recommended), the differences were immediately apparent. There was a greater depth to the sound, a smoother top end and a slightly fuller bass. It was a much more analogue sound, the kind that makes you question digital sources. It was just getting into its stride, after a week or two of running in, when it had to go back in the box while we moved house. And then there was nowhere to put the record deck in the new flat, and so the XXL stayed hidden away while I tried to make sense of our new layout. 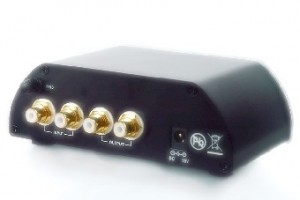 One valve amp later, and after several months of listening, happily I might add, to CD, I put an IKEA chopping block on another bit of furniture designed by Swedes, plonked the Rega onto it and then into the XXL, and stuck on the first LP I could lay my hands on. Wow! It sounded great. Now I’m not going to tell you that every record sounds wonderful, because if the pressing is a bad one, the recording engineer had tin ears, or the chap in charge of mastering had a night to forget, the XXL won’t cover up the cracks. It does make every LP I have tried at least halfway listenable, and of course that’s important, but good recordings are terrific. Surface noise disappears into the background, and instead music grabs your attention and makes you want to listen. There’s no point in trying to do your taxes or in teaching the dog to dance, you will wish to sit back and be immersed in sound. This little beast is quite definitely a slice of the high-end for a pocket money price.

I’ve been listening to Pat Metheny, Keith Jarrett, Steely Dan and Joni Mitchell, and I’ve used LP’s of a certain age that have been with me for longer than I care to, or in some cases can, remember. Every time the stylus hits the groove and the music floats, and I do mean floats, clear of my Rega speakers, I realise why I was drawn to this hobby. Once again I am in the mood to listen to music. I’m also looking for albums I haven’t considered in some time, less than perfectly cut pieces of plastic that I’ve left in dark corners, and in some cases deleted from my mind. Why? Because the sound I’m getting from my pretty modest system kills digital. There’s air, depth and space in spades, and all for around €160. What more do you need to know?

I’m told that adjusting the loading and gain of any given cartridge can make enormous differences to the sound produced, and that isn’t possible with this little box. Instead you get simplicity, good design, high quality components and fine sound. In a market with great competition, and an ever growing list of possible alternatives, this is a must listen piece of kit if you’re after a phono stage that sings. I know one thing, mine is staying put. I’ll be buying it and giving it a good home. I also strongly urge you to take a look at the company website. It’s a lot of fun and full of information. It announces that quite recently the company has been taken over by US based Audiovox, so maybe Oehlbach products will be heading across the Atlantic to a store near you.
I did say that I’d discovered two bits of equipment that are worth trying. The other is a valve amp of Chinese origin, and it’s been living in my system for about 4 months now. There is a very, very long story to tell, perhaps next month.

from aﬀordableaudio,  By Kevin Brock