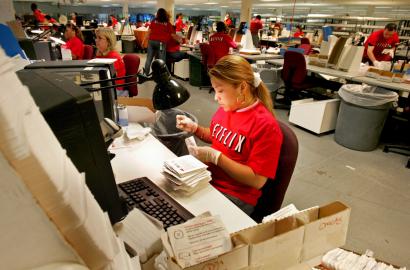 The guys over at Netflix are sure to be celebrating because word has just been released that they have shipped their two billionth movie since their launch in 1999.

The lucky subscriber by the name of Clay Shannon ordered Nick & Norah’s Infinite Playlist on Blu-ray from the service and was greeted with a lifetime subscription to Netflix.

This is truly a feat as it took Netflix a full 8 years to ship 1 billion movies, and then just 2 more to ship another billion.

Press release after the break.NETFLIX DELIVERS 2 BILLIONTH MOVIE
SINCE SUBSCRIPTION SERVICE WAS LAUNCHED IN ‘99

The milestone was reached yesterday when a Blu-ray version of the romantic comedy “Nick and Norah’s Infinite Playlist” was delivered to Clay Shannon, a Netflix subscriber in Birmingham, Ala., from the company’s distribution center in Atlanta. Netflix said it is giving Mr. Shannon a complimentary lifetime subscription to the Netflix service.

Netflix today serves more than 10 million subscribers and ships approximately two million of its iconic red mailers per day from 58 distribution centers spread geographically across the United States. The Netflix service is widely recognized as among the best and most reliable in Internet commerce and has for eight consecutive polls been named the number one Web site for customer satisfaction by the independent Ann Arbor, Mich., research firm ForeSee Results.

The two billion deliveries were generated from a DVD library that now spans more than 100,000 titles, including more than 1,300 that are available in high-definition on Blu-ray. When Netflix launched its subscription service on September 23, 1999 from a lone warehouse in San Jose, Calif., the title count was just over 2,000. It took the company eight years to achieve one billion shipments, a milestone it crossed in February 2007, and a bit more than two years to deliver the next billion.

About Netflix, Inc.
Netflix, Inc. is the world’s largest online movie rental service, with more than 10 million subscribers. For one low monthly price, Netflix subscribers can get DVDs delivered to their homes and can instantly watch movies and TV episodes streamed to their TVs and computers, all in unlimited amounts. Subscribers can choose from over 100,000 DVD titles and a growing library of more than 12,000 choices that can be watched instantly. There are never any due dates or late fees. DVDs are delivered free to subscribers by first class mail, with a postage-paid return envelope, from 58 distribution centers. More than 97 percent of Netflix subscribers live in areas that generally receive shipments in one business day. Netflix has partnered with leading consumer electronics companies to offer a range of devices that can instantly stream movies and TV episodes to members’ TVs from Netflix. For more information, visit http://www.netflix.com.