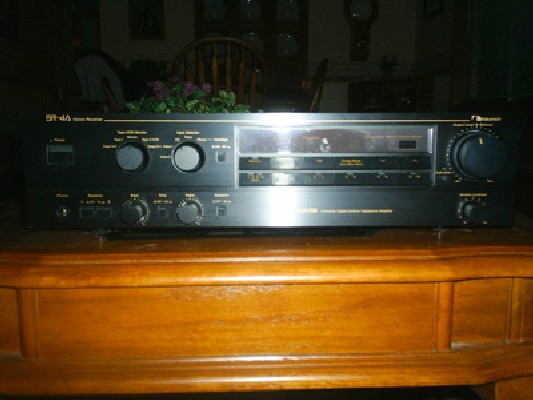 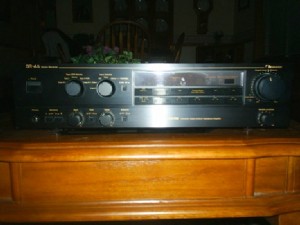 Normally, when an audio enthusiast sees or hears the word “Nakamichi”, the first image that comes to mind is the Dragon, the king of all cassette decks. A piece of equipment so universally admired and desired that it retired with the crown of “Ultimate Cassette Deck”. Luckily, for us Nakamichi made other products as well. One of their finer receivers was the SR-4A. A seemingly average-looking piece of audio, with a bundle of fine touches under its hood that separated itself from much of the competition.

True to the styling of the time, the Nakamichi SR-4A exterior came in a satin black finish. Knobs and buttons (both push and solenoid) ran across the face plate. Unlike the Technics and Sony faceplates, the SR-4A didn’t resemble the cockpit of the space shuttle. LED displays are visible, yet simple, leaving the impression that this is a piece of equipment rather than a souped-up Hasbro Lite-Bright. Having been a fan of Harman Kardon’s faceplates, I instantly liked what I was working with in the Nakamichi.

The front panel is layed out on two levels with the upper taking up 2/3rds of the overall heighth. From left to right run the Power Button, Tape/VCR monitor knob, Input Selector knob, Tuner display section and remote sensor on top and the Memory, AM, FM, Tuning Mode, Up and Down tuning buttons. The bottom row consist of the station memory buttons. Finally along the upper right is a recessed outer ring for balance, and a large volume knob. Tucked in-between the tuner display and the volume knob is a small Audio Mute button.

The bottom third of the front panel, distinguished by a horizontal groove, sits the Headphone input, A and B speaker selectors, Bass control, tone Off/On button, Treble, Subsonic filter, then a flat expanse containing only the STASIS label. Directly under the volume knob is a smaller Variable Loudness knob instead of the typical loudness gain button.

The backside is thoughtfully laid out, placing RCA inputs in a logical sequence and the speaker connection posts in my personally preferred arrangement of speaker A across the top and B below. The FM antennae connection is limited to a coax connection, understandable but personally frustrating.

Firing up the SA-4A the power button made a significant ‘clunk” sound as it engaged. The bass and treble knobs have a medium-weight feel to them with a much-appreciated groove as it passes the center point. In my younger days this was not as big of a deal as seeing the notch/line was quite easy. However, my now bifocaled eyes find black fronts more frustrating.

Inside, the key component to the SR-4A is Nelson Pass’ STASIS circuitry. Below is the explanation as given in the patent.

My first listening session took place in my living room using an HK PL-8450 cd player and a pair of 4 Ohm Totem Dreamcatcher speakers. The sound was very even, almost too much so. Bass extension, or the lack of it, I perceived
as the culprit. I came up with this explanation after listening to some acoustic guitar music, as the notes gave a gentle, pleasant rig until some bass strings were played. At those points the music lost it’s liveliness, the receiver seemed to pull back rather than push thru the passage.

True to Nakamichi’s receiver reputation, the overall sound was slightly warm, personally quite pleasant. The SR-4A played cleanly without distortion up to my limits of volume toleration. Playing the Dreamcatchers that loud did heat the top of the chasis, but not unbearably so.

My second listening session took place in my family room using the same cd player but with a pair of 8 Ohm Polk RTi-35 speakers. In playing the same music, the SR-4A seemed much happier with the easier load. The Polk’s played significantly louder at the same volume points. Bass extension proved not to be a problem. Donald Fagan’s skippy vocals in “The Goodbye Look” gave every bit of the airy presentation that I’ve heard previously on several-thousand dollar systems.

If you’re in the market for a quality used receiver that can pick up FM stations and play cd’s without distorting, the Nakamichi SR-4A would be a strong contender. It’s warm, mellow output creates a pleasant sound that allows the listener to concentrate on the music or other activities, instead of the harsh performance of entry-level receivers. Keeping in
mind its preference for easier 8 Ohm loads, for an office, the SR-4A is a solid choice.