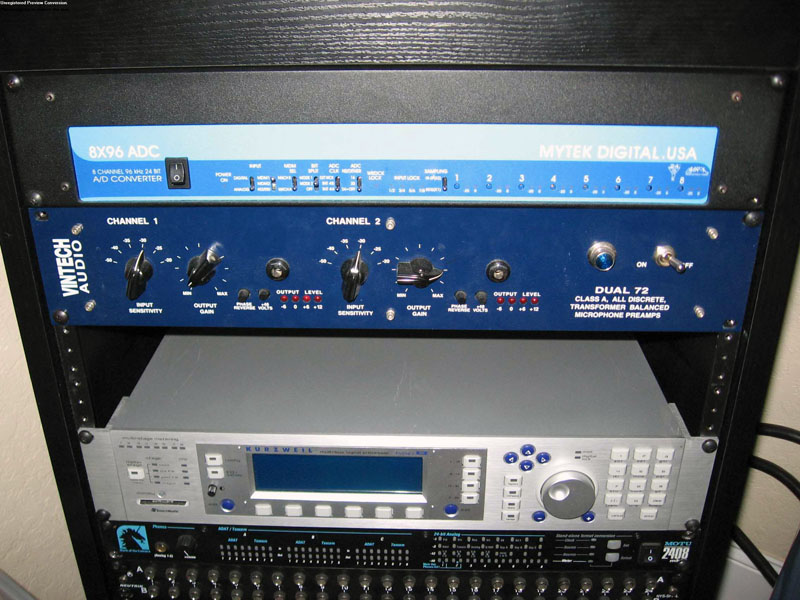 As audio heads more than ever into the digital domain, it also seems to be heading more into the world of the subjective. Back in the pure analog days, it was a lot easier to look at a spec sheet and at least have a vague idea of what kind of audio quality to expect. Not so with digital audio, as the specs are somewhat automatically limited by Nyquist and the almost universal operation at a bit depth of 24. So it comes down to what it always should have been when evaluating gear: our ears.

Nowhere is this as evident as in evaluating the domain portals, analog-to-digital and digital-to-analog converters, since you have to really listen to determine the actual sonic quality. And, until now, one of the given facts about converters is that the more you paid, the better quality you could expect. But the Mytek Digital DAW9624 system shatters that notion by providing not only a host of useful features, but also performance that goes way beyond its price.

The DAW 9624 is actually a complete digital audio workstation hardware I/O package that includes a Mytek 8X96 analog-to-digital converter and 8X96 digital-to-analog converter equipped with 96k ADAT interface, and a choice of either a Hammerfall DSP Desktop PCI or Laptop PCMCIA card. This makes the 9624 ideal for any number of native-based software packages such as Nuendo, Logic Audio, Spark, Peak, Sonic Foundry, Vegas, SEKD, Sequoia and Samplitude 2496, Cubase VST/24, SAWPro, Wavelab, or Cakewalk 8. MacOS, Windows 9X, NT, and 2000, and Linux are all supported.

The heart of the system is the Mytek 8X96 ADC and DAC, and their packaging is virtually identical in that theyre both 2U high and the front and rear panels are pretty much the same in terms of features and controls (more on this later). Both units feature eight channels of 24-bit, up to 100 kHz conversion with different digital I/O available that gives the units multiple uses. For instance, along with the analog input or output, each unit comes standard with eight channels of AES in and out, as well as an ADAT interface with two lightpipes. While the lightpipe I/O talks to the computer via one of the included PCI cards, the AES I/O gives the 8×96 converters the ability to be used as stand-alone units, as well as provide for external digital I/O directly to the computer workstation. 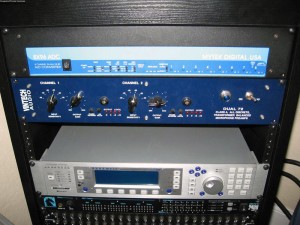 The ADAT I/O is placed in one of two daughter card ports on the rear panel. The second port makes it possible to add another optional digital I/O daughter card for connection via TDIF, Pro Tools (TDM only), and Sonic HDSP or USP. Digital format conversion from AES/EBU to and from one of the other formats provided by the optional daughter card is also possible.

Yet another feature of the 9624 system is its ability to perform bitsplitting functions, as its possible to choose either Prism MRX and S/MUX with the TDIF card, S/MUX with the ADAT card, or dual-wire AES (enabled thought dip switch options).

The analog I/O can be operated either balanced or unbalanced and is on XLR connectors (excellent!) on the rear panel. These are set at the factory to +4 dBm but can be adjusted from +6 to 14 dB from multiturn pots on the front panel.

As previously stated, both the DAC and ADC have an identical look and similar front-panel controls and rear-panel I/O. The front panel of the ADC has a power On/Off rocker switch with associated LED, and a series of switches that set the function of the unit. First is a switch that selects either analog or digital operation, then an Input Selector that allows selection between the AES inputs or either daughter card if theyre installed. The next switch sets the bit-splitting mode while the following one selects either internal wordclock at 48 or 44.1 kHz or external. This switch works in conjunction with a Sampling switch that selects either normal or high-speed (X2) operation. The final switch engages the Supershaper HR noise-shaping algorithm that provides wordlength reduction from 24- to 16- or 20-bit in the analog domain. Next comes an LED that indicates the presence of external wordclock, and a series of LEDs that shows lock of each input pair. The unit also features individual channel signal presence LEDs (green 20 dB and red peak) and individual multiturn level adjustment.

The DAC has the same look and similar controls, except the analog/digital switch and noiseshaper are excluded, and four additional LEDs indicate either 16-, 18-, 20-, or 24-bit wordlength. Both units have the input lock LEDs in common, as well as the high-speed switch and individual channel signal present LEDs and multiturn level adjustments.

The manual is comprehensive, complete with a quick start, signal flow diagrams, and sections on external synchronization, noise shaping, bit-splitting, and digital format conversion. While it does cover all the info pertinent to most operations, it is a tedious read, and a few sections still remain unwritten.

Mytek 8X96 In Use
I used the DAW9624 as the main I/O of my Nuendo rig on numerous 5.1 projects over the last six months or so. I believe that converter performance can be somewhat deceiving in that it takes some time to reach a comfort level in regards to what youre hearing before you can really make a judgment. But once you have that personal reference point to listen from, differences in quality are more easily identified as you switch back and forth. More quickly than most other units, the DAW 9624 (especially the 8X96 DAC) became a house favorite. There is a clarity and depth with the Myteks that dont show up on most other converters in its price range, and even in those costing far more. Whenever we switched to another converter set, usually two things showed up instantly. Depending upon what you compare them to, the Myteks consistently sounded more open on the top end and deeper on the bottom. And while some converters impose a subtle sort of upper midrange edge to the sound, this is nowhere to be found on the Myteks. After comparison to a few of the so-called premium brands, these converters can easily hold their own with any converter at any price range.

Performance aside, I found the 8X96s to have another feature not usually attached to converters  versatility. One of the best features of the 8X96s and one that we found ourselves using all the time is the ability for direct AES interfacing with the computer. Many times you need to digitally connect an outboard unit, or transfer digitally into the workstation, and, while you bypass the great analog conversion circuitry, this convenience is excellent. Yet another thing that I really liked is the fact that all the I/O is on standard XLRs instead of whats now becoming ubiquitous DB25s.

The Mytek DAW9624 has now become our gold standard when it comes to measuring converters, thanks to not only its sonic quality, but also its flexibility. This system provides the rare combination of high quality, functionality, and extremely reasonable cost thats hard to beat. For $6795 not only do you get a huge bang for the buck, but a world-class set of converters as well. Highly recommended!