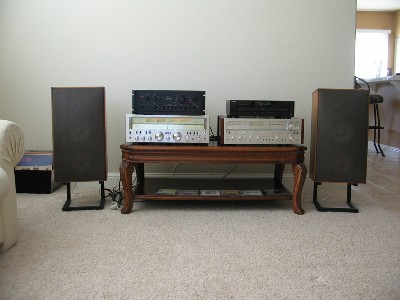 I had some time home alone this weekend and got a chance to compare some of my vintage gear to see which one sounded better to me. I wanted to compare my recently acquired Sansui AU-717 to my Sansui G-8000 and Pioneer SX-1250 to see if this integrated is really any better than my receivers. Before I get too deep into this I want to first state that I’m not one to notice big differences in gear, especially amps and CD players. Speakers are a different matter. All three of these are highly regarded on this site and I wanted to see if I could hear much of a difference between the three.

While this was not a double blind test, pretty hard to do at home alone, I did do some preparation to control the listening environment. This wasn’t’ meant to be a scientific comparison so no sniveling if you don’t agree with my procedures or results. I used a Rives test tone CD and set all amps/receivers to within 1/2 db of each other at 1000 hz. The Sansui’s were set at 84 db and the Pioneer at 84.5 db (the closest I could get due to the detents in the volume control). I checked the measurements each time I switched to a new song. Many of the songs were playing in the 85-90 db range at this setting. All three had their tone controls set flat. I had all equipment plugged into a power strip and turned the strip off each time I switched input/speaker cables. As you can see from the pictures I had all thee close together and could switch out cables in about one minute. I used my ADS L-810 speakers with my Sony CDP-C535 CD changer as the source. One last item, none of these units have been gone through and freshen up in any way. I know that they may not be up to specs and sound quality may be compromised so take my following comments any way you like. 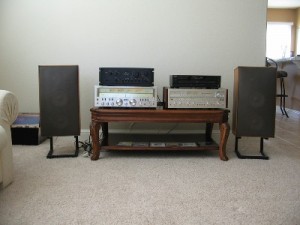 The Legend-The best way to describe the Pioneer SX-1250 is to paraphrase Ali, it floats like a butterfly and stings like a charging rhino! You 1250 owners will know what I mean. I can’t add much to what’s already been said about this receiver. This receiver has been in my family since new and I know it’s complete history. Mine is in mint/original condition and has not been serviced since it was a couple of months new. It had the output transistor problem and blown output transistors were replaced under warranty back in 1977. The build quality of this receiver is top notch. All of the switches are quiet and tight. Not even one burned out bulb in almost 30 years. It has 160 of the cleanest watts ever put out into a vintage receiver.

The Big G-It’s big, it’s bad, and my G-8000 looks huge even next to the SX-1250. This receiver also appears to be original but I had to clean the controls several times after I purchased it to get everything working properly. This receiver is in good shape and while it has not had a hard life it was not someone’s pride and joy like my SX-1250 has been. The receiver had quite a bit of grime inside but is nice and clean now. While I really like the looks of the big G’s the build quality, at least the control gear and switches, are not up to the same standard as the SX-1250 or even the AU-717. The power cord is wimpy compared to the Pioneer. The plastic toggle switches and laminate case do not match the sound quality this bad boy puts out. If it was the same quality as the SX-1250 I think the G-8000/9000 would have been nicknamed the Legend. The G-8000 puts out 120 wpc while the G-9000 puts out 160 to match the SX-1250. While underpowered compared to it’s big brother many agree the sound quality of the G-8000 is very close if not the same except for the tuner on the G-9000. 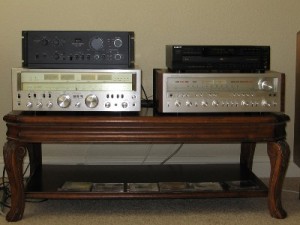 Cool and Sophisticated-That’s how I’d describe my Sansui AU-717. When I purchased this unit it wasn’t working and was very dirty. This unit hasn’t been somebody’s pride and joy for many years. But it’s ready to take that place once again. I was impressed with the dual transformers and build quality of the switch gear of this beauty. I also have the matching tuner but I only compared the units with CD’s as an input as that is what I listen to most of the time. This amp has 85 wpc. While way under powered to the big receivers I don’t listen to my music at rock concert levels, well anymore, so driving my speakers to the levels in this listening session should not be a problem.

I picked five songs from CD’s that have been in my rotation for the past several months. All of these songs have good bass and nice guitar work. The Audioslave has some distortion common in rock songs and really pointed out some of the differences between gear.

First up was Doesn’t Remind Me by Audioslave. I love this song and it’s what turned me into a big Audioslave fan. Like I already mentioned this song has some distortion in it and will bring out any harshness present in speakers or equipment. The 8000 played this the smoothest to my ear with the 717 a bit brighter and the 1250 sounded harsh in some of the passages. The mids were similar with all three but the 1250 sounded the cleanest. The bass on the 8000 was the strongest of the three and it almost sounded like the bass was turned up on the tone control. The Pioneer had the weakest bass of the three but that’s not to say it was weak. Actually it was the tightest on this song and every song but not overdone. Maybe the tighter sounding bass is due to more headroom? This surprised me as I always thought the bass on my 1250 was incredibly strong. On my 8000 I sometimes turn the bass down as it can be too strong. At the very end of this song Tom Morello takes a big strum of his guitar and it reverberates for several seconds. If your speaker/equipment combo is well matched it sounds incredible. It sounded best on the 8000. For this song I thought the 8000 sounded the best.

Next up was Water Line by Dire Straits. This is the remastered CD and it sounds terrific. The results were similar there with the 1250 having a stronger showing in the bass. But once again it was the brightest sounding of the three with my notes showing it did sound harsh a couple of times. Here the 717 seemed to be the best balanced and presented a better soundstage than the receivers. They were all real close with the exception of the slight harshness on the 1250. And I’m not talking a big difference in the brightness, very subtle, but noticeable.

Steely Dan’s Do It Again was the next song. This is from the recently released compilation CD that has been remastered as well. Once again the 1250 sounded a bit bright with the 717 close behind. The 8000 sounded the smoothest on the highs on all songs. But with this song the 1250 had the most detailed sound throughout the sonic range. The bass was the strongest on the Sansui’s with the 8000 being a touch heavy.

The next song was Bridge of Sighs by Robin Trower. The opening of this song has some bells and chimes along with that sweet guitar intro from Robin. Here the 1250 did not seem bright but rather tight and well balanced. The 717 sounded a bit bright here with the 8000 sounding nice and smooth on the highs once again. All three were very close on this song with no specific preference for me.

The last song was Cold Shot by Stevie Ray Vaughn. This song does not have as much bass present as the other songs but rather that nice bluesy guitar riff through the song. Here the 717 was my clear favorite on SRV’s vocals. The 8000 again seemed to have exaggerated bass and the 1250 didn’t seem out of line on the highs.

To cut to the chase, if I had to pick only one piece to keep it would be the G-8000. Fortunately I get to keep all three. While the bass could sound exaggerated at times the highs were the smoothest to my ears and I really dislike bright sounding gear/speakers. But I think many of you would have picked the AU-717 as the best sounding of the three on this day with these songs. It presented the biggest soundstage and had the best imaging of the bunch. ADS L-810 speakers are not known as being the best imaging vintage speakers and while not great, was better with the AU-717 playing. Again my intention here was to determine which of these three sounded best to me and specifically if the integrated amp was much, if any, improvement of these two stellar receivers. For me it was enough to wet my appetite to venture further down the road with either a separates system or try another integrated, most likely a Sansui AU-11000.

I’m sure some of you are thinking that maybe this wasn’t a fair comparison but to the wattage difference and you may be right. But to me the order of preference would be the G-8000, AU-717, and the SX-1250 third. Notice I didn’t say last. Please keep in mind that my comments here are splitting hairs from my listening perspective. While the only difference bigger than a hair was the brightness of the SX-1250 on a couple of songs, all three were very close and sound great. If any of you are thinking about buying any three of these systems you can’t go wrong.

from aﬀordableaudio, By Rick Duffy