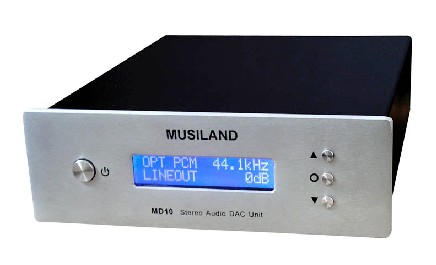 If 2007 wasn’t, then for sure 2008 is the year for music servers. Add-on products are popping up right and left, leading to a myriad of choices and some definite confusion among music server newbies. One of the most fascinating DAC units is the multi-purpose Musiland MD10. It has a tremendous feature set for a small form factor unit that looked quite at home on top of the Underwood modified PS Audio Trio C-100 or the Jolida JD100 cdp.

The Design of Musiland MD10

The Musiland MD10 is a multipurpose DAC. That allows it to work with USB, Toslink, BSN, and Coax inputs. It offers two output modes: RCA analog or headphone output with front panel volume control. The headphone output became a much appreciated way to experience the MD10, as my wife was going through a work schedule that demanded going to bed a couple of hours earlier than normal.

The aesthetically pleasing front panel is dominated by a blue rectangular LCD screen. Information is displayed on two horizontal lines, with white lettering approximately one half inch high. a much-appreciated feature for those of us dealing with middle-age eyesight and bifocals. To the left of the screen is the Power button. On the right are three smaller buttons in a vertical alignment. These are menu buttons, which, after a 2-3 minute perusal of the manual, worked quite easily. (Just make sure to select “RCA” instead of “LINEOUT” for analog output to your preamplifier, integrated, or receiver.) The USB input is not designed for mp3 players, and no analog input exists. The MD10 focuses on computer music servers and CD players with digital output.

Under the hood, one will find a steel wall of a respectable gauge that divides the power section from the electronics board. Solder connections on the review unit were of a solid width and cleanly done–all in all, a very impressive layout and execution. The onboard power supply is a welcome respite from the many offboard designs, as is the threeway power receptacle.

As mentioned above, one should take a couple of minutes to review the short, but clearly written manual. Using the menu buttons is fairly similar to many menus for LCD computer monitors, with a center MODE button and separate up and down buttons that double for volume control when using headphones. The menu screen shows the selected mode on the top level, i.e., INPUT, and the lower level displays the particular choices one at a time. Once you find the specific selection, just touch the center button to keep that choice. Once all the selections are completed, sit back and enjoy.

The true capability of the Musiland MD10 comes in the various menu choices for output. The user can choose to stick with a 16-bit 44k output, or upsample to one of the following choices: 48k, 88.2k, 176k, or 192k. And that isn’t all: the next menu step involves using either 16or 24-bit output. Finally, in recognition of AV capabilities, the MD10 offers stop band audio filtering of 102db for multimedia, or 75db for two-channel fanatics like myself.

My non-headphone listening consisted of my main rig, flipping between the Underwood modified PS Audio Trio C-100 class D integrated amplifier, and the Onix SP3 integrated tube amp. The source unit is a modified Jolida JD100 tube cdp. The Musiland MD10 performed without flaw in its short time in my system. I detected no additional noise being added by the DAC, something I attribute to the designer’s choice of placing a proper-sized power supply onboard rather than a block on the end of a plug. Of course, going thru the digital out defeats the need for the tube section of the cdp, something that I’m quite fond of personally.

In my family room rig, consisting of the vintage Harman Kardon 680i receiver and Onix CD88, a positive difference was apparent from the get go. The noise floor was lowered slightly. I detected smoother cymbals and piano key strikes in tracks from Elton John’s Two Low For Zero cd. The MD10 seemed to be a natural extension of the system.

I saved my computer server rig for last, and in a bit of whimsy, decided to move the server to the living room to work in my main rig. I first ran the server using the trusty Fubar DAC that was a part of the December DIY server article. (For just over $150, the Fubar is a fine value, but it doesn’t offer the output flexibility of the MD10). The stock external power supply is its weak link, though an upgraded unit is offered.) After several tracks, I switched over to the Musiland MD10. The difference is obvious: the extra $150 drops the noise floor. Cymbals ring more clearly and with less grain. William Ackerman’s acoustic guitar work from Conferring With The Moon had an airier quality in the higher chords.

So, what about the sampling and bit differences that the Musiland MD10 offers as user options? That is where my headphone usage paid off. In listening on my different rigs, I found it difficult to detect differences between the various settings. With the headphones on, I could change settings without having to worry about getting back into listening position. This instantaneous switching assisted me in being able to detect the differences on certain discs. As I moved from 16bit 44k up to 24bit 192k, it seemed as if the midrange frequencies broadened the soundstage. Guitars and female voices benefited most from the upsampling. Sara McLachlan’s soothing vocals added a bit resonance in the song “Adia,” from her live Mirrorball release. In her opening chorus, she stretches her vocals to hit the higher notes, yet some resonance lingers. The same holds true a few tracks later in the Enya-style song, “Fear,” an exceptionally well recorded performance. The ability to actually sing live is a big issue with me in live recordings. 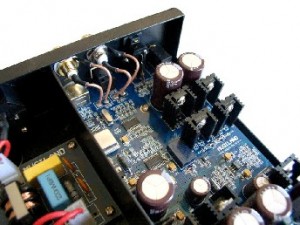 The Musiland MD10 offers up a great deal of options. It’s just a couple of items short of being labeled a category killer. A standard USB output and analogue input would allow for converting analog signals into digital for uploading into a computer-based music server. Maybe there is a model MD20 in the works that would offer this capability. In the meantime, if you’re a headphone junkie or a regular traveler looking for a quality DAC unit to use with cans, the Musiland MD10 offers up a space-saving dual capability For music server fans, the MD10 deserves your attention and consideration. Its rich feature set and quiet power supply make it a fine value.