Over the past decade, SET is an acronym that has evolved from the fringe of the audio world, to become a phrase that even a casual audiophile can recognize. This abbreviation normally stands for Single Ended Triode, but there is an alternate meaning to this term. SET can also stand for Single Ended Transistor, which is an amplifier design that does not get quite the exposure that the tube version does. While most audio enthusiasts will recognize the name Pass Labs, there is another company that has been building single ended transistor amps since the mid 1990’s. Monarchy Audio was founded in the early nineties by C.C. Poon, who has been very active in the audio community for many years. Mr. Poon has worn many hats, including being a reviewer, the U.S. distributor for Luxman kits in the 1980’s, and now a manufacturer.

Monarchy Audio’s stated goal is to bring hi end performance to the market place at an affordable price. Ever since I have been involved in the audio world, there has always been a group of companies who make the claim of high-end performance at a price point that everyone can afford. Some of these companies have offered great sounding pieces, while others did not live up to the promises of their press releases. While these companies have come and gone over the years, one thing that has remained constant is the need for affordable high-end audio. This is the market that Monarchy Audio has chosen to compete in, and over the past fifteen years they have designed pieces that have consistently gathered favorable comments from the audio world. For instance, the SM 70 amplifier is considered one of the best sounding amplifiers that can be purchased for less than a thousand dollars. As a matter of fact, with a retail price of $719, a new owner of the SM 70 could purchase all of his cables, and still be under the thousanddollar price ceiling. However, Monarchy decided to continue the development of this amplifier circuit, and extract the last possible portion of sonic improvement. The end result is the SM 70 PRO amplifier, which in my mind sets the benchmark for performance in the sub one thousand dollar category.

The SM 70 Pro is a single ended transistor amplifier that uses zero feedback topology. This amplifier has a 25 WPC RMS power rating into an 8 ohm load. A 4 ohm load will allow the amplifier to reach 40 WPC. Bridging the SM 70 PRO will allow the amplifier to output 80 WPC RMS into 8 ohms, and 120 WPC RMS into 4 ohms. While this amplifier cannot be considered a powerhouse, it is capable of driving the majority of speakers on the market. If brute power becomes an issue, bridging a pair of SM 70 PRO’s is a logical solution. Mr. Poon sent me a pair of these amplifiers, and I can assure you that two SM 70 PRO’s have enough power on tap to tame most unruly speakers. This amplifier uses the same basic circuit as the SM 70, but Mr. Poon has designed several significant upgrades in this amplifier that are responsible for this amplifier’s extraordinary performance. The list of improvements to the SM 70 PRO includes twice the number of pre driver devices, and a higher capacity torrodial transformer to stiffen up the power supply. There has been an increase in the number of Mosfet output transistors in the SM 70 PRO. This amplifier uses eight output devices, while the standard model only employs four. Finally, larger heat sinks are used in order to dissipate the heat generated by the increased number of output transistors. It is important to note that all Monarchy products have the notable distinction of allowing the owner the option of using balanced input cables as well as standard RCA’s.

The chassis for this amplifier is well constructed, with an overall visual appearance that can be best described as understated. These are compact amplifiers, with a heavy gauge steel chassis, and nicely finished aluminum faceplate. There are even two small rack handles that I found quite useful for moving and positioning the amplifier. The SM 70 PRO has a classic appearance that should visually blend into anyone’s audio system I configured these amplifiers into mono-block mode, so they were delivering 80 WPC to a pair of GR Research Paradox 1 speakers. An Electra Print PVA pre-amplifier was used to drive the Monarchy’s. The source component used for this review is a Sony 595 cd player that has been modified by Tube Research Labs. The system was wired up with Tara Labs cables. The Air 3 interconnects use RCA terminations, so my listening sessions were conducted through the balanced inputs. Mr. Poon assures me that at least 95% of the sonic abilities of this amplifier can be realized through the RCA inputs. 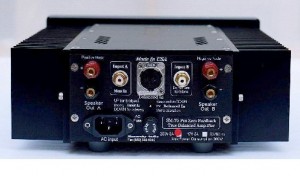 The SM 70 PRO amplifiers are surprisingly powerful and articulate, with the elusive ability to reproduce music in a manner that fully engages the listener. While these amplifiers are capable of extracting minute levels of detail within the music, they do so in a manner that does not detract from the larger scale of the musical performance. For instance, I had a great time listening to Johnny Lang’s “Lie to Me” [Lie to Me; A&M Records CD-0640] through these amplifiers. While I really enjoyed the vocal presentation of Johnny Lang and the background singers, what really drives this song is the powerful bass and percussion lines that are contrasted against a sizzling lead guitar performance. The Monarchy amplifiers allowed me to enjoy this song on several different levels. The drive of the bass and percussion sets a powerful groove to propel this song. It is important to note that the SM 70 PRO is capable of generating formidable amounts of articulate and extended bass out of the Paradox 1’s diminutive 5-¼ inch bass driver. Also, this amplifier does an outstanding job of contrasting the texture vocalist against the sheer power of the band’s performance. Throughout the whole disc, Lang’s guitar lays down one toe-tapping riff after another. It is readily apparent that this young guitar player has been well schooled in the style of modern Texas blues. The SM 70 PRO is capable of conveying all the grittiness and raw energy of Johnny’s playing style. While this is a remarkable performance by an up and coming musician, the SM 70 PRO is most certainly up to the task of recreating Lang’s music in your home.

While I thoroughly enjoyed the power and dynamic range of these Monarchy amplifiers, the reproduction of a human voice was the next hurdle that must be cleared. I believe that the task of recreating a vocal performance is the most critical aspect of audio reproduction. “John Doe No. 24” [Stones In the Road; Columbia CK64327] by Mary Chapin-Carpenter is a delicate ballad that depicts the story of a mute man, who despite his handicap, is able to enjoy the sites and events of New Orleans. This is an outstanding performance by Chapin-Carpenter, and her vocal style conveys a mesmerizing story. The SM 70 PRO turned in an excellent performance on this piece. Mary’s voice was remarkably devoid of any sort of coloration or anomaly. In most regards, these amplifiers outperformed my Electra-Print mono-blocks in regards to midrange neutrality. The lack of midrange coloration is responsible for one of the most enjoyable listening sessions I have ever experienced with this disc. Every subtle vocal inflection of Chapin-Carpenter’s performance is revealed in a velvety smooth manner. I make a strong emotional connection to this song every time I hear it, and these Monarchy amps were able to convey this part of the performance in a remarkable fashion. It has been my experience that the majority of moderately priced solid-state amplifiers fall behind a properly designed tube amplifier when it comes to midrange performance. However, these amplifiers have a magical sounding midrange, and are the best solid-state amplifiers I have yet to experience.

These amplifiers are great all-around performers, however there are a couple of issues about them that should be addressed. Since these are a Class A amplifier, it should not be a surprise that these units run quite hot. They generate a significant amount of heat, and some care should be taken to insure that there is adequate amount of ventilation. While the amount of heat generated was never an issue for me, one should realize that these amplifiers could generate as much heat as any tube amplifier. It is also important to note that the SM 70 PRO is not capable of driving any speaker with a reactive impedance load. This amplifier will play into a continuous 3 ohm load, and can even tolerate dips into 2 ohms. If you have a speaker with a difficult impedance curve, then you should consider another amplifier. However, a pair of SM 70 PRO’s is capable of driving the vast majority of speakers on the market. There is only one area of audio reproduction where I felt these amplifiers were outperformed by the Electra-Print 300DRD’s is the creation of acoustic space. With the Electra-Print’s, each instrument or vocalist resides in a definite acoustic space within the soundstage. Not only can you hear the position of each performer, but you can also envision them within the soundstage. The Monarchy amplifiers are not capable of obtaining that level of performance out of the Paradox 1 speakers. In reality, the SM 70 PRO does an excellent job of imaging, but cannot outperform a Single Ended Triode amplifier in this regard.

I have owned tube amplifiers ever since I was twenty years old. Time and time again, valve amplifiers have proven to me their superiority in reproducing music. Tube amps may not have the best specs, or the highest power output, but in the end I felt they recreated music in the most convincing manner. It has become apparent to me that my previous opinions about reasonably priced solid-state amps were no longer valid. These compact jewels from Monarchy are outstanding all around performers that have the remarkable ability to recreate the complex harmonic texture of music. I have thoroughly enjoyed my listening sessions with these amplifiers, and would be quite happy to build a system around them. I suspect that matching a pair of SM 70 PRO’s to a pair of Magnepan MG 1.6’s would result in a stunning system. Monarchy Audio has a real winner on their hands with the SM 70 PRO, so if you get a chance to listen to this amplifier, be prepared for a memorable experience. In today’s audio world, amplifiers that sound as good as these do, are supposed to cost a lot more than what Monarchy is charging.