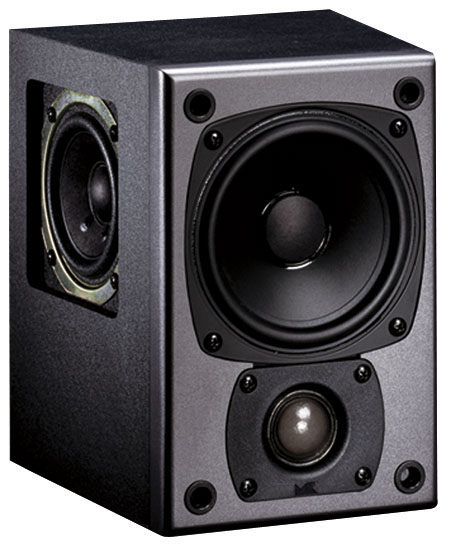 It seems like just yesterday when virtually every monitor speaker on the market was passive, relying on an outboard power amp as a most integral next-to-last component in the monitoring chain. Because of the inevitable mismatches that seem to happen on a frequent basis between speaker and amplifier, and, later, the increased demand from the marketplace for an all-in-one package, speaker manufacturers seemed to shift overnight to the powered monitor. In most cases this offered a tightly matched set of components that not only improved performance consistency, but also increased ease-of-setup somewhat. Now that virtually the entire monitor world has switched to the powered format, M&K goes back the other way, introducing the Creator series, a low-cost, non-powered (except for the subwoofer) 5.1 system that seems to fly in the face of current convention in terms of the self-powered issue. But theres definitely a place for the unpowered monitor in todays world, as well see.

The M&K Creator Series consists of five identical CR-2401 unpowered monitors and a CR-480 powered subwoofer. Each CR-2401 features dual 4-inch woofers and a 1-inch soft-dome Neodymuim tweeter with a system frequency response from 80 Hz to 20 kHz ±2 dB (according to M&K) that can handle unclipped peaks of up to 150 watts (M&K recommends a power amp from 25 to 200 watts). Unlike many of the M&K surround satellites, which are a tripole design, the CR-2401 drivers are all forward facing. The cabinets are relatively small in size (13 x 5 x 6 inches approx.) and weight (8 lbs.), with cabinet construction such that a center speaker can either be mounted vertically or easily lie horizontally on top of a television or monitor (a nice touch). Plus the units are fully magnetically shielded so as not to interfere with television monitor picture. Although I didnt audition them, theres a more typical M&K dedicated tripole surround version of this speaker, the CR-1403, that is also available. 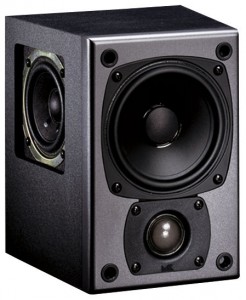 The CR-480 subwoofer features a single long-throw 8-inch driver in a sealed box with a 75-watt amplifier. Like the CR-2401 satellites, its rather small at 10 x 14 x 11 inches and 22 lbs., but sounds a lot bigger than it looks. It features a low-pass filter that is variable from 50 to 125 Hz as well as an input level control. What makes this unit a bit different from just about all other current subwoofers is the fact that not only does it have dual Left and Right inputs to the built-in amplifier, but also a set of speaker level inputs to connect directly to the powered outputs of a receiver or external power amplifier. A companion sub with the woofer mounted inverted, the CR-481, is available for push-pull operation. When a CR-480 and a CR-481 are stacked or placed side-by-side, the combination produces a high-quality, push-pull driver subwoofer package that can easily fit where a single large subwoofer cabinet may not, such as under a consoles or workstation.

The manual for each of the components in the system is short but pretty complete, featuring sections on placement, calibration, speaker damage (and how to avoid it), bracket mounting (with a nice template included), and a 5.1 setup guide. Somewhat unique for a speaker manufacturer, M&K warrants the system at a full 10 years.

In Use
We set the Creator system up in our QC/demo room and were immediately pleasantly surprised at the overall sonic improvement. Our room is laid out similarly to a typical home theater (with better acoustics, though) and is centered around a Denon 3800 receiver. One of the things that Ive always disliked about the system is having to use powered monitors with this receiver, but thanks to the Creator system, we finally got the chance to use it with the built-in amplifier as it was intended to be used and connected the way most consumers would at home.

I found the Creator system not only to be plenty efficient, but the detail and imaging were a significant improvement over the system previously installed. One of the things that you dont notice too much with many 5.1 systems is that they tend to wash out a bit imaging-wise, especially across the front. The Creator system was very defined, however, giving a solid center image if one was intended. Isolated source elements in the surrounds were also much more distinct and definite, which, much to my surprise, seemed to make a program more sonically alive and enjoyable than when presented with an unclear ambient soundfield, as so frequently is the case.

All that being said, the overall sound of this system is somewhat at the mercy of the power amps that you combine it with, going back to the same old nemesis that has plagued sonic reproduction from the beginning of speaker time. Although the frequency response and linearity changed a little bit when we switched to dedicated power amps (Hafler Trans-Nova P3000s), the system was still fun to listen to at both low and high volumes, and sounded pretty much the same regardless of level.

I liked the sound of the M&K Creator system a great deal. Its imaging is very focused and its pleasant to listen to for long periods. Plus, its a real bargain for such a high-quality system. If you already have the power amps or receiver and need a high-quality 5.1 speaker system, the M&K Creator series should definitely be on your list of considerations.