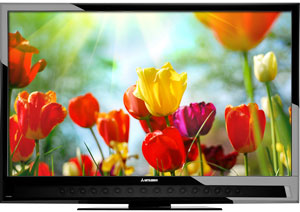 Mitsubishi isn’t just a car company, folks: they also make some really magnificent televisions.  And though not all of them are equal in quality, they pretty much start at “really nice” and go up from there.  They’re priced like it too, so keep one hand on your checkbook before we take a look at the Mitsubishi LT-46164.

First off, I don’t think I’ve ever actually managed to work “Bluetooth capability” into a review before.  I certainly don’t remember it, anyway.  And the picture and sound on this thing are pretty nice–I also don’t remember seeing sixteen speakers making a 5.1 system in one television before. There’s some love for the older components here, and that’s good, but it’s clearly weighted toward newer stuff.

And even the price isn’t terrible for a high-end Mitsubishi television–twenty one hundred bucks out at Best Buy and you’re good to go (aside from, of course, sales tax and suchlike), so if you want a really good quality television and you don’t have to have the biggest as long as the quality’s in place, take a look at the Mitsubishi LT-46164.