Sky Garden is being released as a Single Inventory Hybrid Stereo SACD. The Super Audio CD will serve as both the SACD audiophile and regular Stereo CD version of the album. No separate CD edition is planned by the label.

Comments from Cuneiform Records
Cuneiform Records describes the new release by noting that «Yo Miles! was formed in 1998 to explore, expound and expand on Miles Davis’ mid-70s electric music. For Sky Garden, Yo Miles!’s 2nd recording and 1st release on Cuneiform, Kaiser and Smith have assembled an all-star cast culled from both the jazz and rock communities. They joyously lead the listener along a path less traveled, following directions in music that Davis laid out decades before. Containing 2 1/2 hours of music, the recording features nearly equal parts of Davis’ improv-fused compositions and works composed by Smith and the Yo Miles! project. Featuring riveting improvisations and inspired compositions recorded with the superior sound quality of SACD, Sky Garden conveys an unprecedented sense of immediacy. Reviving Davis’ spirit from the inside out, Sky Garden is an essential work for fans of Davis and of jazz, as well as for those interested in new routes for (and the new roots of) improvisation and creative music in any genre.»

Recorded Live & Direct to DSD
One of the unique things about the release is that it was recorded at The Site in Marin County, CA live and direct to a Stereo Direct Stream Digital (DSD) recorder. The recording engineering was handled by John Cutler and Kevin Scott, the DSD Engineer was Gus Skinas from the Sony SACD Project and the SACD was mastered by David Glasser at Airshow Mastering in Boulder, CO.

In the album’s liner notes, performer and album producer Henry Kaiser says that «This installment of Yo Miles! was recorded directly to a stereo DSD recorder as the band played live in the studio in a similar fashion to the way Miles recorded to stereo or three track analog tape in the past. DSD or Direct Stream Digital is a new recording technology from Sony utilizing high speed (2.8MHz) 1 bit sigma delta as the recording format. It is the closest recording and playback technology to analog tape available today. We also recorded this music with a Studer 1/2″ analog two track machine. Everyone who listened to both recording formats in many blindfold tests preferred the DSD recording to the analog for its amazing depth, imaging and greater detail. This Hybrid Super Audio CD contains a Stereo SACD layer that can be played on Super Audio CD players for a very realistic and analog-like playback experience akin to having an analog master recorder in your home. If you don’t have an SACD player, I would like to suggest that you go out and get one. Check it out — this is a technology that needs to be supported by more users.»

I chatted with David Glasser at Airshow Mastering about the album and he told me that «Musically, it’s in the style of Miles Davis, circa 1970 Bitches Brew era. In my opinion, it’s one of the best stereo SACD projects I’ve had the opportunity to work on, musically and sonically.»

I gave the Stereo SACD layer of the album a listen and I was impressed as well. The definition of the instruments was excellent and the clarity of the bells and percussion were also standouts on the SACD layer. Fusion and Miles Davis fans will want to give this one a listen.

Availability
The new Sky Garden 2-SACD Set is now available for purchase at record stores such as Tower Records. At Tower, you will find the album filed in the Jazz music section under Henry Kaiser, rather than in the SACD Audiophile section, in recognition that the release is a Single Inventory Hybrid Stereo SACD.

It is also available for purchase on the web from Cuneiform Records parent company Wayside Music for $21 (not bad for a 2 SACD set) as well as the Acoustic Sounds, Elusive Disc and Music Direct web sites.

Another Yo Miles! Release
Cuneiform Records informs me that the Yo Miles! tribute group has more Miles Davis material coming to market. Their next release on Cuneiform is scheduled to be another Miles Davis tribute album entitled Up River. This will also be a Super Audio CD release and it is tenatively slated for availability in stores in January.
Sky Garden by Yo Miles! featuring Henry Kaiser & Wadada Leo Smith (Cuneiform Records Rune 191/192) 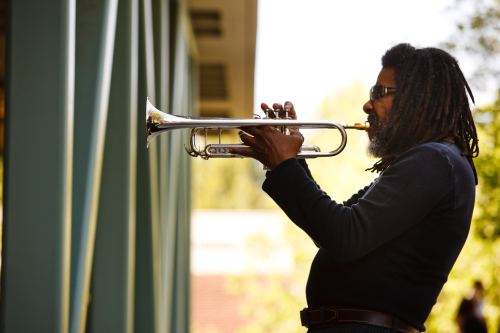