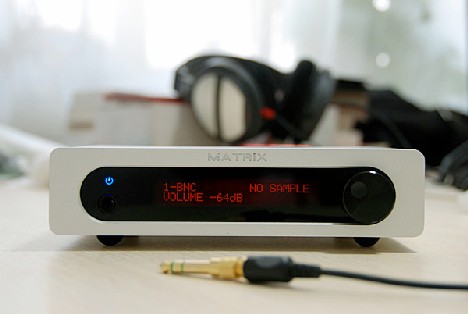 The quest for a budget balanced digital to analog converter has been an on going for quiet some time. The benefits on an external DAC for a stereo application are well known in the audio industry, it just comes down to how much one is willing to spend and what features they are looking for. The first balanced DAC that I was able to get my ears on was the great Neko Audio D100. This piece of equipment is basically flawless, but since it lacks a USB input, may not be perfectly suited for some PC audio listeners. After many hours on the internet looking at countless balanced DAC from many manufactures, I happened upon the Matrix mini-i DAC sold by Tam’s Audio on eBay.

From the first day that the Matrix mini-i Balanced DAC arrived in my hands, I knew that I had something special. As I opened up the box, I pulled the contents onto my desk to survey the goodies; one mark of product quality and manufacturer confidence is what accessories they include with the original product. To my surprise, Matrix includes a standard 2m IEC power cord, a 1m USB A-B cable, as well as a BNC-RCA adapter. The BNC adapter is the part that surprised and thrilled me the most as the mini-i does not accept a common RCA input, only a less common BNC input in its place. However, since the BNC connection is standard on the Matrix mini-i, and BNC is the true 75 ohm connection for digital S/PDIF interface, I decided to use the unit as it was designed instead of adapting to the more common RCA. The unit is well built, and has a very small form factor (eight inches long by two inches tall) which allows it to fit anywhere in your mess of audio equipment. As discussed earlier, the inputs and outputs are more than sufficient, with the S/PDIF digital inputs consisting of BNC and Toslink, a XLR AES/EBU connection, as well as a USB input. The mini-i also have one S/PDIF output in the form of an RCA connector for pass-through, and a pair of analog outputs, one balanced XLR and one unbalanced RCA. So ya, this thing literally will connect almost anything to almost anything else. 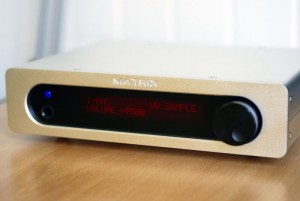 The front of the Matrix mini-i houses a large LCD screen which displays input, sampling rate, along with volume and track time if you are using it as a headphones amplifier. The only control device on the front of the unit is a knob, which controls input and menu selection, as well as volume if wanted. There is also a power indicator light, as well as the 1/4″ headphones jack on the front panel that powers a set of cans up to 300ohms. Navigating the unit is fairly easy being that there is only the one knob. Pushing in the knob, and holding it while turning on the mini-i via the rear power switch causes the mini-i to enter start-up mode. This allows you to navigate the menu of the Matrix mini-i to choose options like volume control on/off, headphones amp on/off, etc. These menu option show off the versatility of the Matrix mini-i as an integrated headphones amplifier with volume control, an integrated DAC-Preamplifier with volume control, or a standalone DAC. As far as a few technical bits of the mini-i, it uses a pair of D/A AD1955 chips and OPA2134 opamps, as well as a separate clock to keep the jitter low. The sampling goes up to 24Bit/192kHz, and the USB input does not require the installation of extra drivers with Windows or Mac. All of this means that the Matrix mini-i is just as easy to hook-up as it is to use.

I had two topics I wanted to explore with the Matrix mini-i DAC. The first obviously was sound quality; is this unit worthy of my stereo rig and listening on a regular basis. The second topic was how do the balanced analog output compare to the unbalanced analog outputs? Having reviewed digital to analog converters before, I am always excited to hear how manufacturers manipulate those little ones and zeros, and what that final product will sound like when coupled to an analog output stage. But before any any brain-picking listening sessions, I decided to just let some music play to give the unit a little burn-in for a week. With a mix of classical, acoustic, and classic rock, the Matrix mini-i was starting to sound good. The first album I selected to listen to was Jack Johnson’s On and On. I love the very forward and earthy sound that this album has and it really can show off the flaws in equipment if you aren’t careful. Starting with the first track on the album, I closed my eyes to embed myself in the music and suddenly found myself at a beach-side bonfire with my toes in the still warm sand. The sound of Jack strumming his acoustic guitar was right in my face, as if breaking the sound into two second sections with its metallic slap over a very woody tone. The sound stage was very defined, but felt larger than life in almost a negative way. His voice was very solid with a large amount of body, and the overall sound was very clear. As I continued down the album, the theme of clear and clean sound became very apparent. The second album to play through, 2L The Nordic Sound, was another reminder that the mini-i outputs a clear and clean sound. The Nordic Sound was a great album to use in comparison to On and On as it was recorded live as thus can sound a little distant even though it is a very good recording. No matter what songs were zinging through the system, the Matrix mini-i was a great source and provided a very clear and solid base for your system to build its sound on. 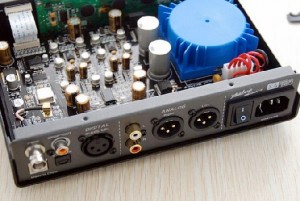 After listening to all the above albums and some, I decided to turn my ears toward discerning any differences between the balanced and unbalanced outputs on the mini-i. What made this test easy was the fact that both the Jungson amplifier and mini-i DAC have balanced and unbalanced inputs, and can be switched on the fly between the two. The other factor that made this test even easier is that both sets of connections were wired with the same new Skywire Audio SE interconnects that were just terminated with the appropriate XLR or RCA connections. Since I had already created many listening impressions about the mini-i, I stuck to one album for the connection test, Micheal Buble’s Call Me Irresponsible. After a few tracks and some flipping of the input knob, the was a very audible difference. The balanced connection had lower background noise and sounded a little more direct. Now, whether those difference are attributable to the design of the difference circuits or simply the fundamental differences between balanced and unbalanced connections, using the balanced analog outputs on the Matrix mini-i DAC produced a cleaner quieter sound than its unbalanced brother. Now don’t get me wrong, if RCA is what you use, use it. The mini-i will produce a great sound for you, but choosing between the two outputs on my equipment was no choice. 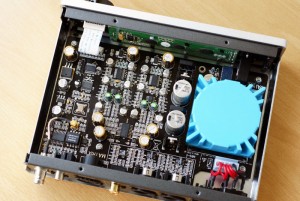 My only beef with the mini-i is that the sampling rate is 24Bit/192kHz for all the inputs except the USB, where it drops to 24Bit/44.1-48kHz. This makes no sense as the USB input would most likely take advantage of the high sampling rates as website like HDtracks.com offer digital files with rates up to 24Bit/96kHz. However, this was only a minor inconvenience as all of the other inputs on the mini-i support the high sampling rates. The easiest solution for PC audio is to use a sound card, and my high sample rate Musiland Monitor 01 USD external sound card came in handy for just this occasion. Passing a 24Bit/96kHz signal from USB to BNC through the Musiland gave me just what I needed to pump that high sample rate into the Matrix mini-i to show off its full glory of balanced and unbalanced converting. My conclusion is that the Matrix mini-i Balanced DAC is a great product at a steal of a price. Not only can it do just about everything, but it does it in a small package that has a clean look to it. And as far as the mini-i’s headphones amp goes, its usability was great with its built-in volume controls, and all the same observations apply to it as the analog outputs on the aspect of sound tone and quality. The bottom line with the Matrix mini-i Balanced DAC is that it provides the sound quality you would expect at a price you would not. So order away fly boy, you are not going to find a better digital to analog converter for cheaper.