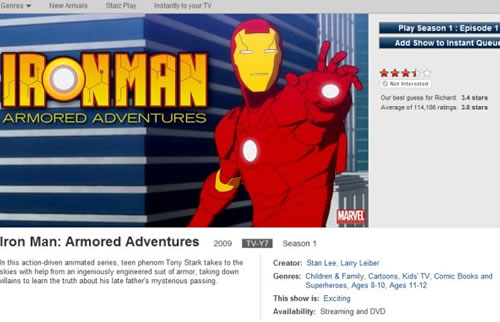 Netflix has inked yet another streaming deal, this time with Marvel Comics, where the Netflix will stream Marvel’s animated series on Netflix Instant, some will be available in HD, like Iron Man: Armored Adventure. Other shows include Incredible Hulk, Silver Surfer, Spider-Man Unlimited, Astonishing X-Men: Gifted, among others. The new deal seems to only include the US, meaning Canadian Netflix owners are left in the dust for new content (once again).

Netflix also announced that they plan to add more Marvel titles this Summer and Fall. Netflix has been stacking up on streaming content over the past year or so, getting huge distribution deals with production companies.